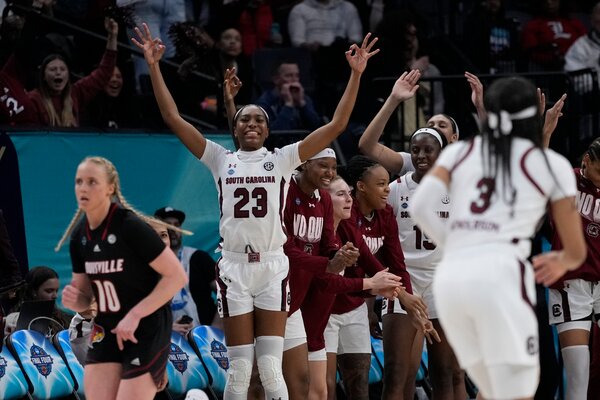 Throughout the course of the N.C.A.A. women’s basketball tournament, Dawn Staley, South Carolina’s storied coach, has preached a message of consistency and pressure to her players: Maintain the thing.

And as often happens with Staley and her players, they listened.

South Carolina, the top-ranked women’s basketball team in the country, will get another shot at a championship title after defeating fellow No. 1-seed Louisville, 72-59, at the Target Arena in Minneapolis on Friday night. The Gamecocks will play the winner of the UConn vs. Stanford game scheduled for Friday night in the same arena.

Louisville tried and tried again to bite into South Carolina’s lead, using its speed and wealth of varied talent to leave the Gamecocks frazzled at times. The teams frequently found themselves in a tangled mess on the court as they fought for possession. But the Cardinals could not penetrate South Carolina’s defensive wall, which blocked, stole and danced around the Louisville players with the confidence of a team that has lost only twice this season.

Even double and triple teams couldn’t stop the Gamecocks from making their way to the basket.

The Gamecocks lost to Stanford by 1 point in the Final Four in 2021 and have been hungry for redemption and a second national title since 2017. South Carolina was ranked No. 1 in the Associated Press poll all season and one of its losses was a surprise defeat to Kentucky at the buzzer in the Southeastern Conference tournament. But its defensive prowess has already taken down the best opposition in the country earlier this season — including Connecticut and Stanford.

This run has been a sweet turn of events from last year, especially for Aliyah Boston, the Gamecocks’s centerpiece 6-foot-five forward, who missed a last-second shot that would have sent South Carolina to the championship game. Asked last weekend if she replays any of those moments, her response was a definitive no. “I’ve let go of that since last season and we’ve moved on,” she said.

Moved on she has. Boston, 20, used her relentless force around the basket to lead South Carolina with 23 points and 18 rebounds, securing her 29th double-double of the season and a single-season rebound record for South Carolina.

“We knew that we were going to be tested and this was the hump we needed to get over,” Boston said after the game.

But she didn’t carry her team alone. The Gamecocks have come to rely on a core support system of rebounding skills from Victaria Saxton, who scored 10 points, the low and wide defense of Brea Beal, who scored 12 points, and the offensive flexibility of Zia Cooke, who scored 10, and Destanni Henderson, who scored 11.

Forward Emily Engstler was able to plow through the Gamecocks defense often and scored 18 points and 9 rebounds before fouling out of the game. Her three consecutive layups to gave the Cardinals a lead in the second quarter. But South Carolina took it back quickly and decisively. The loss means the end of Engstler’s collegiate career, but she is likely to be selected in the first round of next month’s W.N.B.A. draft.

Engstler’s 6-foot-one build helped her find open paths to the basket. But South Carolina was no match for 5-foot-7 Hailey Van Lith, Louisville’s star guard and leading scorer, who scored just 2 points in the first half. She finished with 9 points.

South Carolina entered the game with Staley and Boston having just picked up the Naismith coach and player of the year awards. Staley, a Hall of Fame player and an Olympic gold medalist as a player and a coach, began building up the South Carolina women’s basketball program in 2008.

The Gamecocks have made 10 consecutive N.C.A.A. tournament appearances under Staley, not including the 2020 tournament that was canceled because of the coronavirus pandemic. Four of those appearances have been Final Four runs.