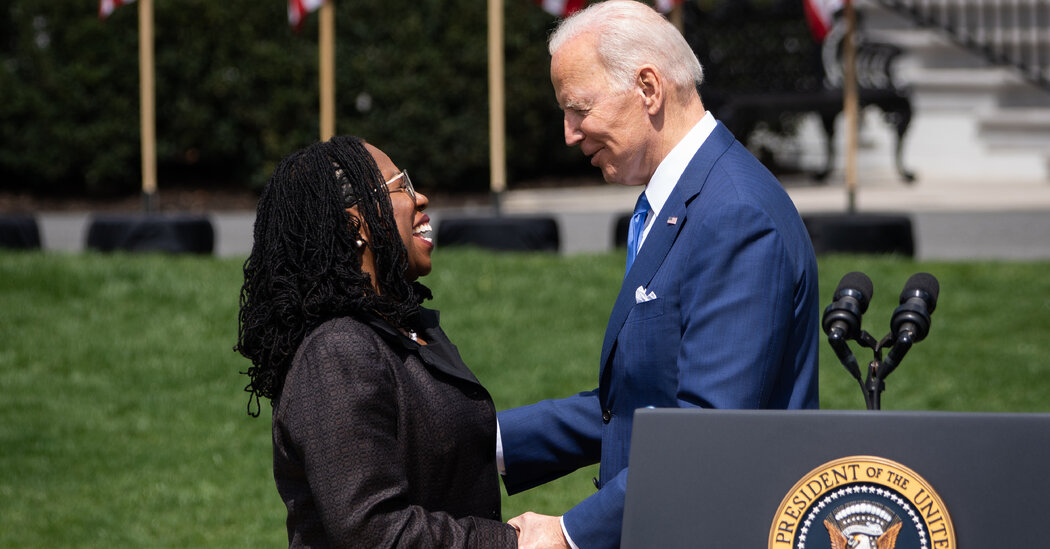 WASHINGTON — The partisan clash that concluded with the confirmation of Judge Ketanji Brown Jackson to the Supreme Court is hardly the end of judicial showdowns in the Senate.

With control of the chamber up for grabs in November, Democrats, led by Senator Chuck Schumer of New York, the majority leader, intend to push through as many Biden administration judicial nominees as they can this year. Taking a page from Republicans, who used their majority to reshape the federal courts with a packed pipeline of conservative judges, Democrats plan to install a racially diverse set of jurists with nontraditional backgrounds before the G.O.P. has the chance to win a majority and slam the brakes on President Biden’s court picks in 2023.

“We are going to keep at it,” Mr. Schumer said in a recent interview. “Keep putting judges on the bench who are diverse, as we have done in the last year, both demographically but professionally” as well.

Top Democrats were ecstatic that they could get Judge Jackson confirmed on their original timetable, despite suggestions that they should hold off until Justice Stephen G. Breyer left the bench, which he is planning to do when the Supreme Court’s term ends this summer.

But with the 50-50 Senate under their control only by virtue of Vice President Kamala Harris’s ability to break ties, Mr. Schumer and Senator Richard J. Durbin, Democrat of Illinois and the chairman of the Judiciary Committee, had an early spring confirmation in their sights from the start and urged the White House to move quickly to choose a nominee and get on with the process.

While Supreme Court nominations draw immense attention, it is conceivable that there might not be another opening on the court for years, pushing the struggle over the direction of the courts down to fights over filling open appellate and district court seats. That is where the real trench warfare has been waged for the past two decades and where it is likely to continue for the foreseeable future.

Led by Senator Mitch McConnell of Kentucky, the minority leader, Republicans have intensified their criticism of Biden administration nominees with backgrounds as public defenders as Republicans try to make a midterm case that Democrats are soft on crime.

They are not going to make it any easier for Democrats going forward, though if Democrats remain united and healthy, they can continue to confirm judges with their 50 votes and a willingness to consume floor time. But if Republicans win the Senate majority, they will no doubt pull back substantially on judicial confirmations and force Mr. Biden to find nominees more to their liking — if they choose to consider any nominees at all.

When they last held the Senate majority, Republicans not only blocked Judge Merrick B. Garland, President Barack Obama’s Supreme Court nominee, from getting a hearing in 2016, but they also slowed approval of other judicial nominees to a trickle for the last two years of Mr. Obama’s tenure. It is unlikely things would be any different in 2023 if Republicans gained control during the Biden era.

Mr. Schumer doesn’t want to contemplate such a possibility, but he conceded it would be a problem for Mr. Biden’s judicial picks.

“The hard right has such a hammerlock on Republicans in terms of judges, you can’t predict what they will do,” he said. “But it’s not going to be good.”

Mr. Schumer pointed to the record 59 judges the Senate has confirmed so far — one to the Supreme Court, 15 to the influential appeals courts and 43 to district courts — as a major achievement for both Mr. Biden and Senate Democrats. A majority of the new judges have been women and people of color, and about 30 percent have been public defenders, a departure from the typical background of federal court judges, who often have experience as prosecutors or academics.

“One of my main goals early on was diversity on the bench,” said Mr. Schumer, who like Mr. Biden spent many years on the Judiciary Committee. He pointed to the confirmation of Judge Jackson, the first Black woman to be put forward for the Supreme Court and the first former public defender who will serve there, as “the apotheosis of what I’ve been working for for a long time.”

As they sought during the Jackson hearings to blame Democrats for the steady deterioration in the confirmation process, Republicans took aim at one Democrat in particular: Mr. Schumer. They pointed to his leadership role after the election of George W. Bush in 2000 in persuading fellow Democrats to block Mr. Bush’s nominees, citing their conservative ideology and their refusal to answer questions at hearings.

Senator Charles E. Grassley of Iowa, the senior Republican on the Judiciary Committee, said that Mr. Schumer “poisoned” the confirmation process by obstructing judges based on ideology and filibustering multiple Bush administration nominees. Mr. Grassley said Mr. Schumer’s strategy led directly to Republican opposition to Judge Jackson, a nominee whom nearly all Republicans saw as qualified but too ideologically liberal.

“Senator Schumer and Democrats decided to destroy the model of deference if a nominee was qualified, excluding consideration of their philosophy,” Mr. Grassley said before casting his vote against Judge Jackson. “That’s why judicial philosophy has become the focus with judicial nominations.”

Mr. Schumer said Democrats had been justified in their opposition given Mr. Bush’s extremely narrow win in 2000 and the administration’s choice of conservative nominees aligned with advocacy groups such as the Federalist Society.

“When a really extreme organization like the Federalist Society could dictate to presidents who should be on the bench, that’s what started it,” Mr. Schumer said. “I just discovered it, exposed it.”

“These guys were such hard-right people,” Mr. Schumer said of Mr. Bush’s judicial picks, adding that he never second-guessed his decision. “I think I did the right thing.”

With the Supreme Court fight out of the way, Mr. Schumer and Senate Democrats can now turn to filling remaining vacancies and lining up floor votes for 16 judicial nominees — three for the appellate courts and 13 for the district courts — who have been voted on by the Judiciary Committee but not yet considered by the Senate.

To advance those in the pipeline, Democrats will need to take special steps to force floor votes on six nominees on whom the Judiciary Committee deadlocked. Moving ahead might also require ignoring the objections of Republican senators to district court candidates in their home states, a change that would represent another escalation in the judicial wars, and one that Democrats have been reluctant to make.

Progressive groups are urging the White House to do all it can with the November election looming.

“We can only hope they keep coming and that the Senate keeps confirming them with a goal of filling all vacancies by 2023,” said Rakim H.D. Brooks, the president of the Alliance for Justice. “The next eight months might be the very last opportunity to do so.”