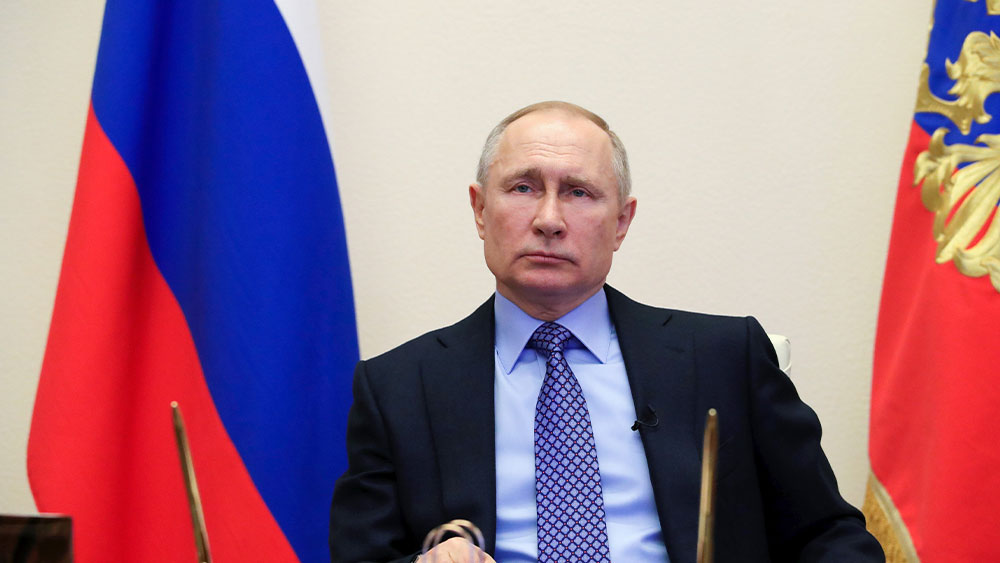 Dow Jones futures will open on Sunday evening, along with S&P 500 futures and Nasdaq futures. The stock market rally suffered significant damage last week, with the major indexes below key support and starting to move toward their Jan. 24 lows.


Fears that Russia will invade Ukraine are weighing heavily on the market rally, which is already dealing with inflation and other big headwinds. The uncertainty over what Russian President Vladimir Putin will do adds significantly to the volatility.

Belarus said Sunday that its big war games with Russia will be extended beyond today, citing unrest in parts of Eastern Ukraine. Russia had said its troops would return home at the conclusion of the massive drills on Feb. 20. But Russian forces have continued to build up in recent days.

Putin and French President Emmanuel Macron on Sunday agreed to trilateral talks “in the few hours” that would also include German and Ukrainian leadership, according to a French statement.

Secretary of State Anthony Blinken said President Joe Biden is willing to meet with Putin in any format at any time.

Biden said late Friday that he was confident that Putin has decided to invade Ukraine within the next few days. In a later tweet, he explained why the U.S. is proclaiming Russia’s intentions in advance. “We’re calling out Russia’s plans. Not because we want a conflict, but because we are doing everything in our power to remove any reason Russia may give to justify invading Ukraine.”

Cease-fire violations between Ukraine and pro-Russian separatists have surged in the past couple of days. Separatist leaders have ordered a full military mobilization and civilian evacuation, claiming Ukraine is close to launching an offensive. Shelling from Russian-held Donetsk and Luhansk areas of Ukraine, killing two Ukrainian soldiers, may be an effort to goad Kyiv into lashing out. Local, pro-Russia media are claiming explosions in rebel-held parts of eastern Ukraine. These events offer a pretext for Russia to stay mobilized and likely to launch a new Ukraine invasion.

The U.S. and Western nations are poised to impose major economic sanctions vs. Russia in the event of a Ukraine invasion. On Saturday, Ukrainian President Volodymyr Zelensky, at a security conference in Munich, urged the West to impose sanctions now.

But setting aside the geopolitics, the stock market rally looks ever weaker. Investors should take a defensive posture with minimal exposure.

Dow Jones futures open at 6 p.m. ET on Sunday, along with S&P 500 futures and Nasdaq 100 futures. ETFs tracking the Dow Jones, S&P 500 and Nasdaq 100 retreated Friday evening after Biden made his latest comments on the Russia-Ukraine crisis.

While Dow futures will open Sunday evening as usual, U.S. markets will be closed Monday in observance of the Presidents Day holiday. Other stock markets will be open around the world, however.

Apple (AAPL) dwarfs all of these names, but it’s the only one trading below its 50-day moving average.

The RS line, the blue line in the charts provided, tracks a stock’s performance vs. the S&P 500 index. It’s an easy way to spot leading stocks in any kind of market. In a weak or choppy market, stocks with RS lines at highs could be leaders in the next rally.

Meanwhile, Nvidia stock and Tesla (TSLA) rebounded from near their 200-day moving averages on Friday. This is an area where Tesla stock and Nvidia (NVDA) found support before in late January. Can these big former winners continue to do so? It’ll likely depend on the market rally’s next moves. But as megacap stocks, Tesla and NVDA stock will have something to say about the overall market direction.

Donald Trump’s Truth Social site is set to debut in Apple’s App Store on Monday. That’s according to posts from an executive viewed by Reuters. That could mean the return of former President Trump to social media on Presidents Day. Facebook and Twitter banned Trump from their networks in the wake of Jan. 6, 2021, storming of Capitol Hill.

Truth Social is part of Trump Media & Technology Group. David Nunes, a former GOP congressman who now heads TMTC, has said recently that Truth Social will launch at the end of March.

Trump Media is going public via a SPAC merger with Digital World Acquisition Corp. (DWAC). DWAC stock has done well in 2022 and appears to be consolidating once again.

Analysts say Truth Social will be sure to attract a lot of users to start, but profitability could be difficult.

Home Depot (HD) headlines earnings before Tuesday’s open, while Mosaic (MOS) and Palo Alto Networks (PANW) are among those due after the close.

Tesla stock and Nvidia are on IBD Leaderboard. ORLY stock is on the IBD 50. Commercial Metals was Friday’s IBD Stock Of The Day. UNP stock was Thursday’s.

New coronavirus cases have tumbled in the U.S. and worldwide, with hospitalizations and deaths also down. Covid restrictions are being scaled back or removed in many states and countries around the world. One exception is Hong Kong, which is seeing its first real spike of the pandemic.

The stock market rally tried to bounce last week but faded badly late in the week.

Apple stock dipped 0.8% to 167.30 last week. During the late January market sell-off, the iPhone giant never came close to its 200-day line. AAPL stock now has a cup-with-handle base with a 176.75 buy point, according to MarketSmith analysis.

Commercial Metals stock rose 3.1% to 36.75 last week. It’s slightly above its 50-day moving average, working on a 38.82 buy point. CMC stock could be starting to form a handle, with a potential lower entry of 37.59. Investors already could use that as an early entry.

ORLY stock edged up 1.3 to 676.96 last week, its fourth straight modest weekly gain. O’Reilly stock has reclaimed the 50-day line, offering an early entry in a shallow cup base. The official buy point is 710.96.

Auto parts retailers often do well in tough markets. The business can thrive in difficult economic times. Right now, with new-car prices scarce and used-car prices soaring, many Americans may keep their old cars longer. That’s good news for O’Reilly and its rivals.

NTR stock had a wild week, tumbling to undercut the 50-day line briefly before quickly rebounding to record high before pulling back slightly. But, ultimately, Nutrien stock dipped 0.7% to 75.78. That’s just below a 77.45 buy point.

On Wednesday night, the fertilizer maker reported a 929% EPS surge with revenue up 79%. Other fertilizer stocks also are doing well, despite some big intraday and daily swings. That includes MOS stock, which reports late Tuesday.

Meanwhile, BYD (BYDDF) on Saturday launched the Yuan Plus in China, with pre-sales starting in Australia, a new market for the Chinese EV and battery giant. BYD recently signaled it’ll sell 1.5 million EV and hybrids in 2022.

Nvidia stock fell 1.3% to 236.42 for the week, but after hitting resistance at its 10-week line, the chip giant tested its 40-week again and nearly touched its 200-day line. As with Tesla, NVDA stock pared Friday’s losses slightly.

If Nvidia stock can rally above its 50-day line and its Feb. 10 high of 269.25, also breaking a steep downtrend, that would offer a very aggressive entry. NVDA stock would still have a long way to reach its Nov. 22 peak of 346.47.

The stock market rally, already under pressure, sold off again late last week. The Dow Jones, S&P 500 index and Nasdaq composite broke below their recent ranges and are heading toward their Jan. 24 lows. The S&P 500 and Nasdaq composite are now below their Jan. 31 follow-through day lows, with the odds high that they break to new lows. Undercutting the Jan. 24 lows would mark the end of the market rally.

The ailing market rally has retreated sharply over the last several days, so arguably it’s due for a bounce. But it doesn’t have to happen right away, and one or two good days wouldn’t be that meaningful.

In the very short run, the stock market will continue to focus on fears that Russia invades Ukraine. The long Presidents Day weekend could have major developments related to Russia and Ukraine, raising the potential for a big move up or down on Tuesday. But all of those moves could quickly reverse with the next headline.

Beyond the Russia-Ukraine crisis, inflation and Fed rate hikes hang over the market. JPMorgan economists now expects quarter-point rate hikes at nine consecutive Fed meetings, with many other Wall Street analysts betting on at least seven. One question is whether the Fed will start the rate-hike cycle in March with a 50-point hike.

On a somewhat related note, supply-chain woes have been a constant refrain in recent weeks. General Electric (GE), Applied Materials (AMAT) and Roku (ROKU) were among the many companies that cited supply-chain issues continuing to restrict production and more.

Getting supply chain issues resolved would not only bolster corporate profits and economic growth, but also likely curb inflation. With Covid cases plunging and restrictions quickly ebbing, there may be a light at the end of the tunnel, but it could be a long way off.

Rather than try to guess how Russia, the Federal Reserve and supply chains play out — and how financial markets will react — focus on what the market is doing now. Right now, the major indexes and leading stocks — outside of a few pockets of strength — are simply not healthy.

Don’t get lured in by one or two good market days. The major indexes have a lot of work to do. In any case, there are only a handful of stocks setting up right now. At some point, there will be a strong market rally with a slew of quality stocks flashing buy signals and moving higher from there.

When that happens, you want to be ready. Keep your watchlists fresh and stay engaged with the market.