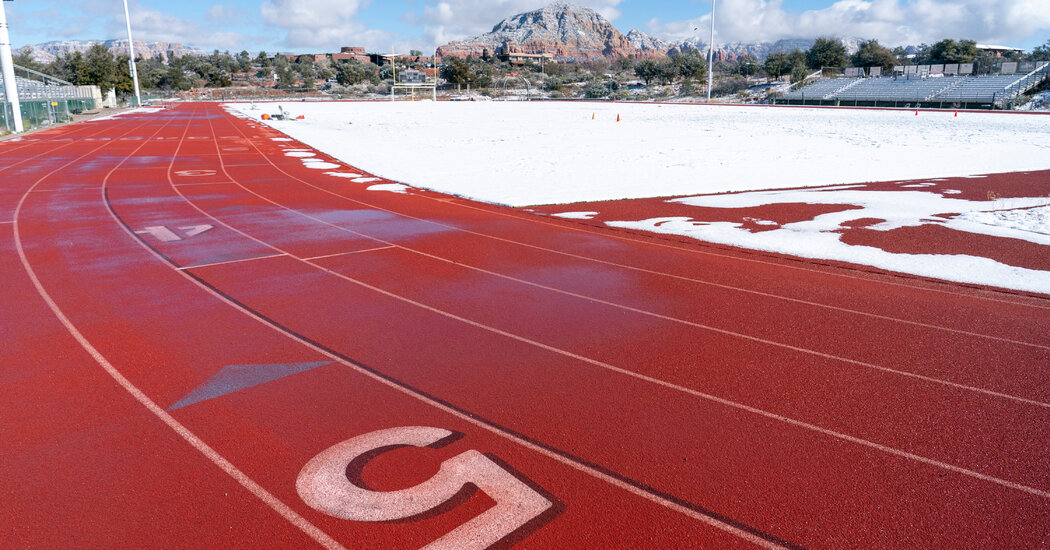 The mystery is equal parts scatological and consequential, and it is the talk of the professional running community in Arizona:

Did a runner defecate near a public high school track in Sedona, Ariz., and have elite professional runners been restricted from using the track because of it?

The questions became public on Tuesday when Sam Parsons, a professional runner for the Tinman Elite group, tweeted “Wait… this story of why pro runners in Flag are banned from using Sedona HS track for training rn cannot be real.”

It was certainly true that the school had decided to limit outsiders’ access to the track. It was less clear that it had done so because a runner had defiled it, but that hardly mattered. The incident almost instantly was dubbed “poopgate” — a hashtag emerged — and multiple running podcasts discussed it.

Molly Seidel, the bronze medalist at the Tokyo Olympic marathon who lives in nearby Flagstaff, tweeted about it. So did Rachel Schneider, another Olympian in Flagstaff. The middle-distance runner Nikki Hiltz jokingly posted a photo wearing a sweatshirt that says “I Pooped Today.” David Ribich wryly distanced himself from the controversy, clarifying that his professional team, the Brooks Beasts, trains in Albuquerque, not Flagstaff.

Beyond the jokes, however, is a more complicated story, as well as an unlikely truth: The professional running ecosystem in the United States relies heavily on a public high school track in a city with less than 10,000 people.

Flagstaff has become a mecca of distance running, rivaling or even surpassing Portland, Ore., and Boulder, Colo., over the past decade. It sits about 7,000 feet above sea level, the perfect elevation for year-round altitude training, and boasts mild summer temperatures and hundreds of miles of trails.

As runners moved there, infrastructure developed. Northern Arizona University in Flagstaff has won five of the last six men’s N.C.A.A. cross country championships, and the running shoe manufacturer HOKA sponsors a professional team, the Northern Arizona Elite, based there.

Almost as important as Flagstaff, however, is the track in Sedona that helps runners follow the live high, train low credo of endurance athletics.

A tourist destination known for its red sandstone rocks and art galleries, Sedona is about a 45-minute drive from Flagstaff, and about 2,500 feet closer to sea level. Runners living in Flagstaff frequently travel to the Red Rock Jr. Sr. High School track for high intensity speed work and intervals, training that is less effective at Flagstaff’s higher altitude.

“For runners in general, I would admit that it’s a vital part of the Flagstaff training experience,” Ben Rosario, the coach of Northern Arizona Elite, wrote of the Sedona track in an email. Just in the last month, he said, he has seen athletes from all over the United States, Canada and Europe following the high-low path from Flagstaff to Sedona.

Even with professional runners flocking to the region, the Sedona high school had the same informal rule as public school tracks across the country — anybody could show up and use the track outside school hours, and sometimes even during school hours. But in response to both a growing trash problem and the coronavirus pandemic, last year the district’s operations director instituted a system in which running groups were asked to reserve time on the track. They also had to have insurance and pay a nominal fee.

In some cases, the international running community apparently wasn’t aware of the local rule. Before last summer’s Tokyo Games, the track was practically swarming with Olympic hopefuls who had relocated — some from as far away as Japan — to what they considered the perfect training environment. Professional teams based elsewhere also frequently hold training camps in Flagstaff.

“With global Covid restrictions lifted, athletes from all over the world have traveled to Flagstaff this winter to train and many were going to Sedona to work out without going through the proper channels,” Rosario said. “When you do that, the facilities are not open, including the bathrooms.”

As for what caused the school to restrict access to the track, nobody was willing to fully describe the misdeed. Rosario said the incident occurred a few weeks ago, but he wasn’t sure what it was. Stephen Haas, an agent who represents many runners who train on the track, said the rumors were “only partially true,” but wouldn’t say more.

But the story is clearly more than a rumor. Jennifer Chilton, the director of operations for the school district, acknowledged in an email that the school had reduced the number of reservations it was taking to use the track. The reason, she said, was mostly to make it available to students who wanted to use it.

Still, she said, “It is accurate to say, in a limited way, that behaviors of some runners played a role,” Chilton wrote. She said that while she is not a runner, she has learned that runners relieving themselves outside is not unusual and that “packing toilet paper is common and evidenced.”

Chilton said her main concern was the well-being of the students and lamented that “the focus is on what is sensational.”

The identity of any runner or runners who may have committed a sensational act remains a mystery. Runners and running fans have scoured Instagram photos to determine which groups trained in the area in the past month, and pointed their fingers at a couple of out-of-town track clubs, which denied any indiscretions.

In the meantime, only school-affiliated groups are allowed to use the track, though past reservations are being honored. Professional runners have migrated temporarily — they hope — to less storied tracks in nearby Cottonwood or Camp Verde, or they are staying in Flagstaff.

Some members of the professional running community are working on a proposal to restore access to the track that they will present at a school board meeting next week. Rosario said a solution would need to keep students safe, adequately compensate the school, and last but not least allow “professional track athletes to use a facility that just happens to be in the perfect location as they train for the Olympic Games.”