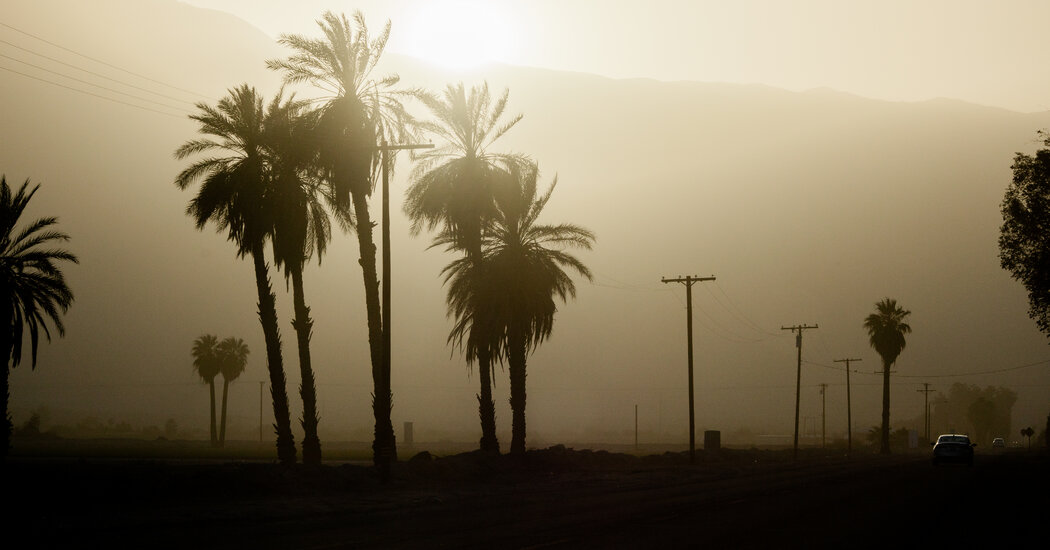 THERMAL, Calif. — Three times a week, Pascual Campos Ochoa, 26, loads up a duffel bag with a brown fleece blanket and a plastic container of oatmeal. A van picks him up from the dusty trailer park where he lives — where stray dogs wander among the carcasses of old cars and working electricity is not a given — and takes him to a clinic for kidney dialysis.

Mr. Campos Ochoa is the youngest person to require the treatment at the clinic; he has been on dialysis since he was 18 and is waiting for a kidney donor.

Still, it was not until recently, he said, that he considered that his health problems may be tied to the trailer he has shared with his family for 16 years at the Oasis Mobile Home Park — and the water tainted with high levels of arsenic that spewed for years from its aging pipes.

For years, people living at the park, home to a little more than 1,000 residents in about 230 units, have suffered from a variety of health problems. They have varied from persistent rashes and hair loss to kidney disease like Mr. Campos Ochoa’s and even cancer — that residents and their advocates say may be caused by contaminated water.

In 2019, the United States Environmental Protection Agency found levels of arsenic in the park’s water as high as almost 10 times the allowable limit. Arsenic, which is naturally occurring, has been linked to those ailments, as well as an array of other severe and chronic symptoms.

No comprehensive study has been done of the causes and extent of the health issues at Oasis, and the agricultural work most residents do consistently ranks among the nation’s most hazardous occupations.

New management at the park said it has spent more than $400,000 since November to fix the water problems — plus more than $840,000 to provide alternative water. But residents are still being warned not to drink the water or use it for cooking, bathing or brushing their teeth. Government agencies, including the E.P.A. and Riverside County, as well as community advocates, all agreed that the living conditions at Oasis have been untenable.

And the park’s residents say they are trapped there — unable to find other homes they can afford in a county that has become a magnet for Californians priced out of other parts of the state.

So even if one family moves out of Oasis, new tenants almost immediately fill the vacancy.

“We have nowhere to go,” Eudelia Ochoa Gutierrez, 45, Pascual’s mother, said in Spanish, fighting back tears.

The dilemma reflects both the continuing plight of California’s largely immigrant agricultural workers and how the state’s housing crisis has also become a health and safety emergency for many of its most vulnerable residents.

And, like the lead contamination of water in Flint, Mich., it’s an extreme illustration that many Americans can’t count on having clean, safe water.

A state audit recently found that just in California, one of the nation’s richest states, almost a million people lack access to clean drinking water. Most at risk are often farmworkers, who have been forced to live in substandard housing in isolated communities far from municipal water systems, often relying on water from agricultural wells.

Because of its size and residents’ complaints about other health and sanitation issues, Oasis has been a magnet for attention. But dangerous levels of arsenic have been found in numerous small systems not hooked up to the regional Coachella Valley Water District’s water system, according to the E.P. A.

A 2017 report by the American Society of Civil Engineers gave the nation’s drinking water infrastructure a “D” rating and said the United States needs to invest $1 trillion in the next 25 years to upgrade water systems.

For many years, residents who complained of strange smells or rashes after using the water were assured it was fine. But in 2019, the E.P.A. ordered the park’s owner, Scott Lawson, to reduce arsenic levels to lawful limits and to provide free bottled drinking water in the meantime.

Mark Mazda, the lawyer representing Sophia Clark, a daughter of Mr. Lawson’s who was appointed administrator of the park after he died last year, said Mrs. Clark has been working in good faith with the E.P.A. since November and has hired a certified water treatment firm.

A notice sent to residents said that from late May to July arsenic levels in the water were near or below allowable limits. Mr. Mazda said the water coming out of residents’ taps was now clean, and the water treatment regimen put in place should provide clean water until the park can achieve a long-term solution of hooking up to the Coachella Valley Water District’s water system. But there is no plan in place for that to happen.

But the notice sent to residents citing the improvements also included the warning not to drink, cook with, bathe in, or brush their teeth with the park water.

Julia Giarmoleo, a spokeswoman for the E.P.A., said that improvements had been made but satisfactory lab tests have not been consistent. She added that untreated water with high arsenic levels has still been distributed to people’s homes and that various parts of the E.P.A. order, including developing adequate plans to flush out the system, have not been met. Until the park shows consistently satisfactory water-quality readings for a year, it will be required to provide bottled water for residents.

“The system remains out of compliance,” she said.

Residents and their advocates say the solution is to find a safe place for residents to live, not to fix a site that is compromised at too many levels.

Raul Ruiz, the United States representative who grew up in the area and lived in a trailer home as a child​, said a solution should involve relocating residents to preferential housing​ and the construction of affordable housing​.

He said stricter enforcement would not just be important for Oasis but, “It’s going to send a message to other unscrupulous mobile home park owners that have not been permitted or that are noncompliant with E.P.A.’s clean water orders, that it will no longer be tolerated.”

Mr. Lawson was a member of the Torres Martinez Desert Cahuilla Indians, as is Mrs. Clark. Because the park is on tribal land, local officials say the United States Bureau of Indian Affairs is effectively in charge of enforcing water quality directives, but community advocates, local leaders and the new management say that the agency has not stepped in to help.

In a statement, the bureau said it was working with officials at other agencies and that the E.P.A. had the authority to enforce its own order.

“The B.I.A. takes its responsibility seriously to administer land held in trust for Indian tribes,” the statement said. “Due to multiple legal jurisdictions involved, this is a complex issue that requires cooperation and collaboration to resolve.”

Mrs. Clark’s husband, James Clark, said the lack of progress was maddening. “It seems like no one is trying to help,” he said. “So we’re trying our best, with limited funds and with limited resources.”

Last year, the area’s State Assembly member, Eduardo Garcia, and the nonprofit Leadership Counsel for Justice and Accountability were among those who helped the county secure a $30 million state grant aimed at helping to move out residents and to build new affordable housing. But the effort to decide what to do with the money has been slow and contentious.

Many mobile home parks in the area have their roots in the era of California’s Bracero Program, which brought Mexican workers to the state’s fields during World War II.

Advocates say the county has not invested enough in planning or infrastructure to house the region’s farmworkers — many of whom are undocumented and are hesitant to speak up about poor housing conditions.

At the same time, a growing number of Californians have headed for the vast desert east of Los Angeles, driving up housing costs there, too. The Coachella Valley’s booming tourism industry has compounded the problem.

For Leadership Counsel organizers like Omar Gastelum, who grew up at a park not far from Oasis, the fact that families have been living in unsafe conditions at Oasis is made more galling by the wave of luxury development sprouting up in the region. The Thermal Club, a gated vacation home development that includes private auto-racing tracks, is just a 10-minute drive away.

County leaders, Ms. Figueroa said, “have the upper hand when these developers come in.” They could, she said, require developers to pay impact fees that could help extend utilities to poorer communities nearby or include low-income housing in their plans.

But there is a sense of inevitability that conditions will persist. Officials and advocates agree that it will take years to provide affordable housing for California’s poorest workers and to complete needed water and sewer upgrades.

V. Manuel Perez, the Riverside County supervisor who represents the area, declined requests for an interview.

In a lengthy statement, he said the county has been working with local, state and federal partners to extend clean water and build more housing.

“The lack of housing and investment dates back to the recession, the lack of funding, and other priorities by leaders of that time,” he said in the statement. “There are over 400 unpermitted mobile home parks that I inherited. This is a challenge that I and others will consistently work on.”

Mike Walsh, a Riverside County housing official whose job includes planning for how best to use the $30 million grant, said that relocating Oasis residents was a complicated game of musical chairs. He said that many of the families moving in behind them have left homes where conditions were even worse.

“We’re fighting against the tide,” he said.

Meanwhile, residents do their best to get by on the tattered edges of American life. Sometimes, against all odds, they reach for something more.

Earlier this year, Mrs. Torres and her husband, Luis Manuel Ortiz, went to buy Fernando a truck, something inexpensive to drive to school. Instead, on impulse, they bought him his dream car, a 2020 cherry red Dodge Charger Scat Pack that cost $59,000 that they don’t have.

Mrs. Torres put the $2,500 down payment on her Visa card. They take on extra agricultural work when they can, but she has stopped working lately to care for Fernando whose cancer has spread to his spine. She said neither she nor her husband talk about the bills with their son.

“What’s important is that he’s happy with his car,” Mrs. Torres said.

Fernando, an 11th grader, keeps his car spotless, and parks it in the carport of his family’s mobile home.

Inside the car’s dark interior, a reddish-brown rosary with the image of a teenage boy hangs from the rear-view mirror.

After Fernando’s kidney surgery last year, his grandmother introduced him to the story of St. José Luis Sánchez del Rio, a 14-year-old boy who was killed for refusing to denounce his Catholic faith.

In his bedroom, Fernando also has a small statue of the teenage martyr, who died in 1928 and was canonized in 2016.

On a recent afternoon, standing in his bedroom with Kendrick Lamar’s song “Alright” playing in the background, Fernando talked about his patron saint and how he starts and ends his day with a prayer.