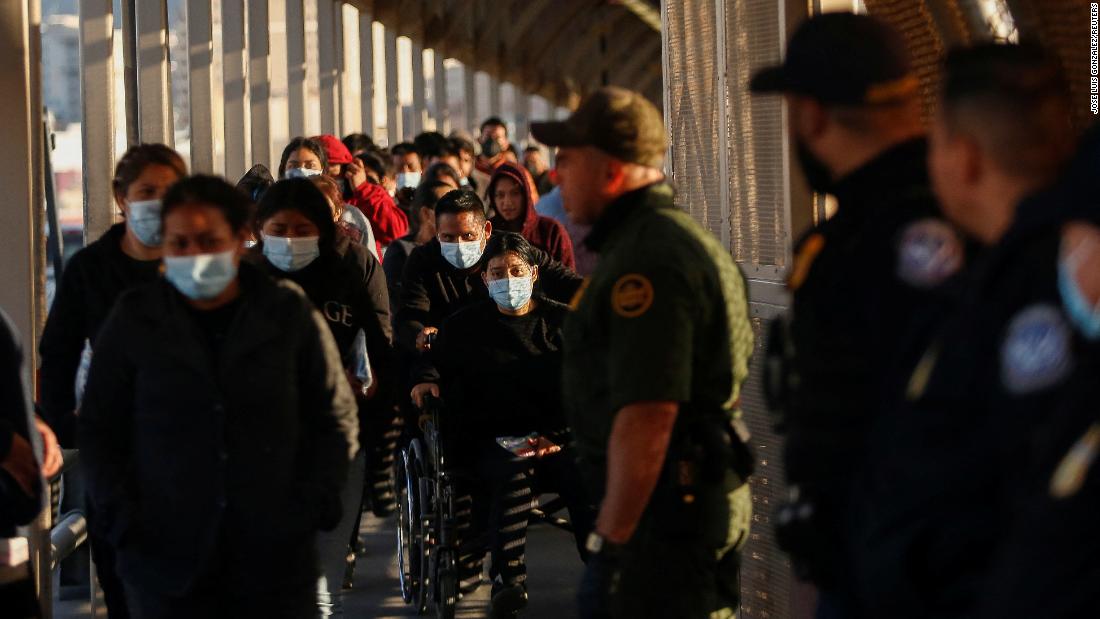 But what is actually happening? How is this different from the way things were handled in the past? And what could happen next?

Here’s a look at some key questions and answers about the controversial policy and what’s happening on the ground.

In the early days of the coronavirus pandemic, the CDC issued a public health order on March 20, 2020, that officials said aimed to stop the spread of Covid-19. The order allowed authorities to swiftly expel migrants at US land borders, and it’s been extended multiple times. The policy is widely known as Title 42, for the portion of US code that allowed the CDC director to issue it.
On April 1 of this year, the CDC announced plans to terminate the order, stating that it’s no longer necessary given current public health conditions and the increased availability of vaccines and treatments for Covid-19. The policy is scheduled to end on May 23.
A federal judge in Louisiana Monday said he planned to temporarily block the administration from ending the policy. The judge’s decision is unlikely to change the situation on the ground, since the policy remains in place. But it may throw a wrench in the administration’s plans moving forward — or possibly delay them.

Why is it controversial?

After the Biden administration announced it was lifting the policy, a debate erupted over whether ending it is justified, and whether officials are prepared to handle an expected increase in migrants at the border.
GOP lawmakers running for reelection this fall are using the repeal of Title 42 as a talking point to attack Democrats on immigration. Republicans who’ve been vocal about the importance of ending other pandemic restrictions now describe ending Title 42 as a dangerous mistake.
Democrats from swing states facing tough reelection battles have also criticized the move, arguing the administration doesn’t have a clear plan in place.
Earlier this month, Arizona, Louisiana and Missouri took the fight over Title 42 to court, arguing proper procedures hadn’t been followed when the administration announced an end to the policy. More than a dozen states, mostly GOP-led, have since joined the suit. And on Monday, US District Judge Robert Summerhays said he planned to side with those states’ request for the court to immediately intervene and issue a temporary restraining order.
The details of his order remain to be seen; the judge said the Justice Department and states would need to negotiate the next steps. That leaves the future of Title 42 in flux for now, and is likely to fuel even more debate over the policy.

But controversy over Title 42 didn’t begin with the Biden administration’s recent announcement of plans to roll back the policy.

The border restrictions were controversial from the moment the Trump administration announced them. Immigrant rights advocates argued officials were using public health as a pretext to keep as many immigrants out of the country as possible. Public health experts also slammed the policy, saying it wasn’t justified by the circumstances.
Leading Democrats like Senate Majority Leader Chuck Schumer called the policy “draconian” and “inhumane.”

Many advocates expected President Biden would lift the order when he took office, given his campaign promises to build a more humane immigration system. Instead, his administration extended the policy more than a year into his presidency and defended it for months in court.

What’s been happening at the border since this policy began?

Under Title 42, authorities expelled migrants at the US-Mexico border more than 1.8 million times in just over two years, according to US Customs and Border Protection data. The US asylum system effectively screeched to a halt, with migrants who claimed they were fleeing persecution blocked from making their case — something that US and international law says they should have a chance to do.
In recent weeks, the policy drew renewed attention when authorities at first were using it to turn away Ukrainians at the border, then largely started granting exceptions that allowed thousands of Ukrainians seeking refuge to cross.

Advocates argued a racist double standard was at play as many migrants from Central America and Haiti continued to be turned back under the policy; officials denied that accusation and said each exemption is granted on a case-by-case basis.

Migrants encountered under Title 42 are either expelled to their home countries or into Mexico, where human rights advocates say they have documented many abuses. Since President Biden took office, Human Rights First says it’s identified nearly 10,000 cases of kidnapping, torture, rape or other violent attacks on people blocked or expelled to Mexico under Title 42.

But migrants haven’t stopped trying to cross the US-Mexico border — a detail people on both sides of the debate are pointing to, with very different arguments about what it shows.

US Customs and Border Protection says arrests along the US-Mexico border increased in March, when there were more than 220,000 migrant encounters. CBP says it’s apprehended more than 1 million people so far this fiscal year, which began on October 1.

To some extent, migration is seasonal. And the number of people trying to cross the border tends to go up in the spring. Experts also say the economic hardships of the pandemic have further intensified migration trends.
Those who support Title 42 point to border arrests as they argue how essential the pandemic policy is for blocking illegal immigration. Those who oppose the policy argue official statistics about encounters at the border inflate the severity of the situation, because the data include people crossing the border multiple times. They argue Title 42 has actually caused more border crossings.

Nothing yet. But some big changes could be coming.

Officials have indicated they expect lifting Title 42 will prompt a new influx of migrants at the border. They’ve said they’re preparing for different outcomes, including a worst-case-scenario possibility that up to 18,000 migrants a day could try to cross the border.

The Biden administration is starting to reveal more details about its plans as it faces increasing pressure to prove it’s prepared.

If the order is lifted, the way migrants are processed at the border is largely likely to go back to how it was before 2020. Under that system, migrants are either removed from the country, detained or released into the US while their cases make their way through immigration court.

But this time, the Department of Homeland Security says it’s deploying more officers and agents to the border and expanding detention capacity. It also says it’s planning to evaluate asylum requests more rapidly and deport those who don’t have valid claims.

One complicating factor: We don’t know yet what the federal judge’s promised temporary restraining order will say, and whether it will block some of the steps the administration says it’s planning to take to prepare.

Migrants who’ve been waiting for months or even years in makeshift camps and shelters in Mexico told CNN in recent weeks that they were feeling hopeful.

But the federal judge’s decision leaves their fates uncertain.

What could happen next?

With litigation pending and the political debate showing no sign of easing, a number of scenarios are possible. Among them:

• More court orders: Summerhays, the federal judge, says he will grant a temporary restraining order in the states’ lawsuit over ending Title 42. And the Biden administration says it will comply with the order “if and when” it’s issued. But the details of the order remain to be seen. That case is still pending, as is a separate lawsuit Texas filed over the policy. Further rulings from the courts could have a significant impact on how the administration’s plans take shape.

• The plan continues: Lifting Title 42 could still end up going ahead as planned on May 23, or at a later date, depending on what happens next in court proceedings. This will likely result in an increase of migrants at the border, as officials have predicted. Administration officials say they’ve been preparing for an influx, and advocacy groups say the situation can be handled in an orderly fashion and doesn’t have to spiral into a crisis. But will it?

• An about-face: Regardless of what happens in court, could the Biden administration reverse course and further delay the end of Title 42? That’s something some moderate Democrats have been pushing for. Officials previously had maintained that May 23 was the planned end date, and that they were making preparations. They haven’t said how the court ruling affects their plans.
• New legislation: Earlier this month a number of Democrats in the House and Senate joined with Republicans in backing legislation that would block the administration’s decision on Title 42 until the public health emergency in other government agencies is also lifted.

This much is clear: The border is once again the epicenter of major political debate, and the lives of thousands of people hang in the balance.