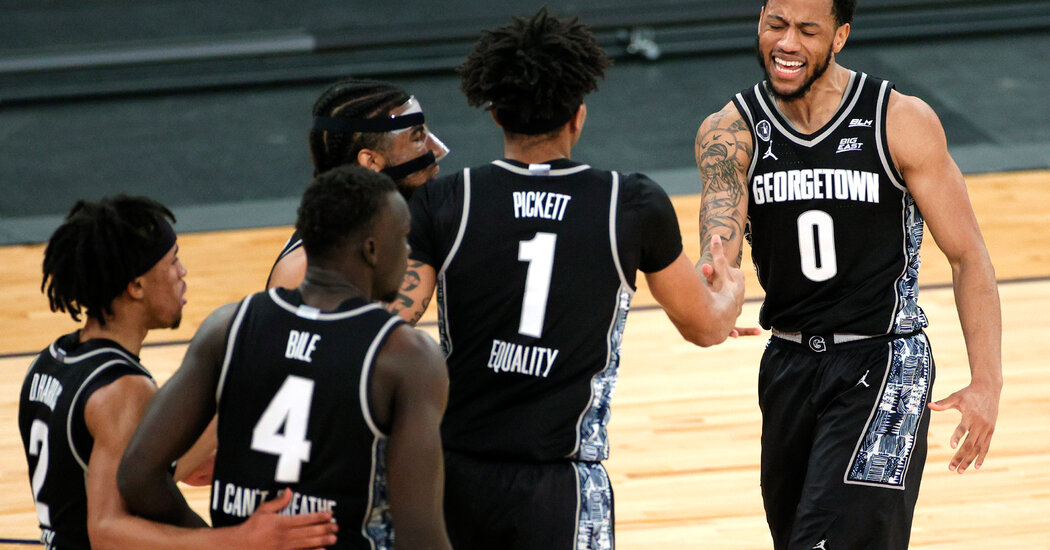 The 2021 N.C.A.A. men’s basketball tournament is filled with teams you haven’t seen in the bracket in a while. Thirty-eight teams in the 68-team field missed the most recent tournament, in 2019, and many have been gone longer. Here’s a look at some returning teams to watch.

The Crimson Tide last made the tournament in 2018 as a No. 9 seed, but have not made it past the second round since 2004, when they made it to the round of 8.

This season, No. 2-seeded Alabama has proved it is one of the top programs in the tournament, beating Louisiana State to win the Southeastern Conference championship for the first time since 1991. It is an offense-heavy team, led by four consistent scorers — Jaden Shackelford, Jahvon Quinerly, John Petty and Herb Jones — all averaging more than 11 points per game. The Crimson Tide have emphasized the 3-point shot, attempting an average of 10.7 per game and making 35.1 percent. This is a well-balanced team that shares the ball well.

This could be one of the years that Alabama finds success in more than just football. The Crimson Tide will face No. 15-seeded Iona in the first round.

No. 9-seeded St. Bonaventure is the Atlantic 10 regular-season and tournament champion. It relies heavily on its five starters — Kyle Lofton, Jaren Holmes, Jalen Adaway, Dominick Welch and Osun Osunniyi — who play an average of 34.5 minutes and score an average of 62.7 points per game, accounting for 88.9 percent of the team’s points.

This makes these five players invaluable, but also leaves the team vulnerable if one of them is not on his game. If those five starters remain reliable, St. Bonaventure could provide a challenge to No. 8-seeded Louisiana State.

The Bonnies last played in the N.C.A.A. tournament in 2018 as a No. 11 seed, losing to Florida in the first round. This time, they have a stronger core of players and look like they could be a great upset pick out of the No. 8 and No. 9 seed matchups.

No. 12-seeded Georgetown, last seen in the tournament in 2015, stunned Creighton, a No. 5 seed, 73-48, to win the Big East tournament championship. The Hoyas have had a lot of up and down moments this year, and their record shows it, but they are also a great upset pick as they face fifth-seeded Colorado in the first round.

Led by Coach Patrick Ewing, the team will have unexpected momentum from the Big East tournament going into the first round. Look for the Hoyas to depend on the senior guard Jahvon Blair to play heavy minutes and set up the offense consistently. Blair’s steady production — 15.8 points in 35 minutes per game — is the center of this team’s offense and key to making a run in the tournament.

Who could forget Loyola-Chicago’s unexpected Final Four run in 2018? It was the bracket buster of the year, and Sister Jean Dolores Schmidt got more national attention in a month than some teams got all season.

This year, the No. 8-seeded Ramblers are back with an even better team. Loyola beat Drake, 75-65, to win the Missouri Valley tournament and finished first in the conference. The Ramblers have the best defense in the league, holding opponents to an average of 55.5 points per game. This makes them a particularly good pick for a first-round upset, but their path to the Final Four this time looks murkier. Illinois, the No. 1 seed in the Midwest region, is going to be tough for any team to beat.

Hope for the Ramblers lies with the senior center Cameron Krutwig, the only starter left from the 2018 Final Four team. Averaging 15 points and shooting 59.7 percent from the field, Krutwig is expected to be the anchor and leader who will give the team a chance of making it out of the region. Loyola will face No. 9-seeded Georgia Tech in the first round.

Arkansas has not been in the tournament since 2018, when it lost to Butler in the first round. Back as a No. 3 seed, the Razorbacks are the seventh best scoring team in the country, averaging 82.4 points per game. They have an efficient offensive system led by Coach Eric Musselman and the freshman guard Moses Moody, who leads the team with 17.4 points per game, shooting 44.2 percent from the field.

While this Arkansas team is better than the last one to make the tournament, it is up against a first-round opponent, No. 14 Colgate, that has the third-best offensive rating in the country, according to Sports Reference, behind Gonzaga and Baylor. This is a strong upset pick and will be a fast-paced matchup. If the Razorbacks are going to make it to the second round, they are going to have to control the pace and depend on their adaptable offense.