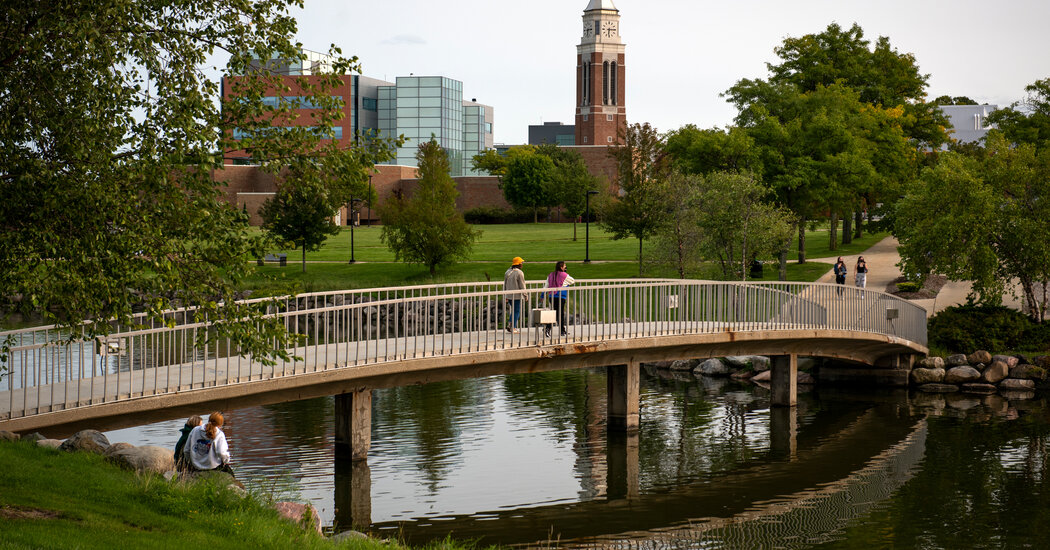 Carnell Poindexter looked at the subject line of the email — “Congratulations!” — and opened it immediately while in a debate class at his high school in West Bloomfield, Mich.

Mr. Poindexter, an 18-year-old senior with a 3.8 grade point average, thought that perhaps this was the scholarship he had hoped for from Oakland University.

“You worked hard and it paid off!” read the Jan. 4 email, informing him that he had won a $48,000 academic scholarship over four years. Mr. Poindexter, who wants to be a lawyer, and his parents were elated.

But then, more than two hours later, came another email with a subject line that read, “CORRECTION.”

Oakland University — where the campus extends into two cities, Auburn Hills and Rochester Hills, each about 30 miles from Detroit — said it mistakenly told 5,500 incoming students that they had won the scholarships. In-state students pay about $58,000 in tuition over four years, with room and board costing an additional $11,192 a year, according to the university.

The university told students in the follow-up email, “Because you are not a recipient of the Platinum Presidential Scholar Award, this message was unfortunately sent to you in error.”

And just like that, the excitement of thousands of students, including Mr. Poindexter, evaporated.

“He was extremely disappointed, embarrassed, even frustrated because he put in a lot of hard work,” Gwen Poindexter, Mr. Poindexter’s mother, said on Sunday.

Brian Bierley, a spokesman for the university, said in a statement that the mistake was “due to human error.” He added that the students who received the message did not meet the eligibility requirements for the award.

To qualify for the Platinum Presidential Scholar Award, incoming students must have had a high school grade point average of at least 3.9 and a score of 1,450 or higher on the SAT, or 33 on the competing ACT, according to the university. As of this month, 162 students have qualified for the scholarship, and 62 have accepted.

The errant email from Oakland University, which The Detroit News reported on Friday, occurred weeks before another university in Michigan made a similar mistake.

Central Michigan University told 58 high school seniors this month that they had won the Centralis Scholar Award, which would cover their tuition and room and board, and award them $5,000 to study abroad. But days later, the students were told that the email was a mistake and that they had not won the prestigious scholarship.

The university then told those students that it would still pay their full tuition for four years, but that they would not receive other perks of the scholarship.

That course correction led Ms. Poindexter to wonder whether Oakland University would take steps to make up for its error. She said she understood there was a big difference between helping 58 students with scholarships and helping 5,500, but that some type of compensation seemed appropriate for her son and the other students who got the mistaken emails.

“We saw what happened with Central Michigan and how they were saying, ‘We are going to own our mistake,’” Ms. Poindexter said. “We said, ‘Well, why won’t O.U. do the same?’”

Mr. Bierley said Oakland University encourages students to “submit updated transcripts and any new test scores between now and the fall semester to see if they might qualify for additional scholarships.”

In its apology email to students, the university said, “We know the college application process is an extremely stressful time and we are sorry for the added confusion and disappointment this email has caused.”

Ms. Poindexter said what was most dispiriting was seeing her son call friends and family members to inform them of the mistake. Oakland University had been one of his top choices, and the prospect of being a Golden Grizzly excited him.

Ms. Poindexter said her son is still considering going to Oakland University but will wait to see if other colleges offer him scholarships.

“Everyone knows,” she said, “that college is expensive.”