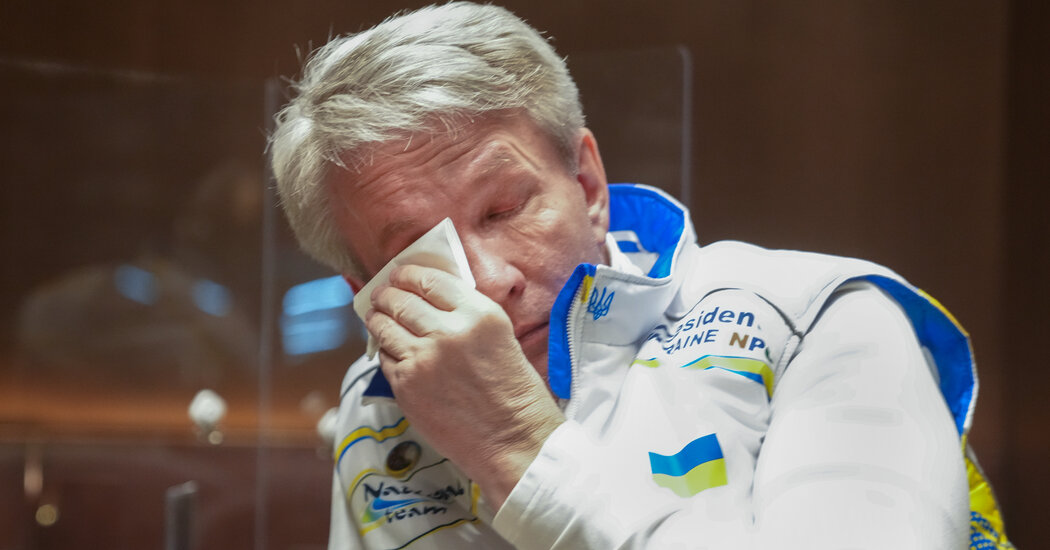 ZHANGJIAKOU, China — Valerii Sushkevych, the president of Ukraine’s Paralympic committee, can detect in the pink, swollen eyes of his athletes that they have not been sleeping.

He knows they are overwhelmed by worry and fear over the fate of their families and their country, which is under attack by the Russian Army.

He sees the athletes glued to their mobile phones, clinging to every last byte of internet connectivity with their loved ones before it is cut off, and he sees them wipe away tears before heading outdoors to compete on behalf of their country.

They feel powerless, except in one regard.

“Our soldiers have battles in Ukraine,” Sushkevych said in an emotional interview Monday, portions of which were conducted with an interpreter. “We, the Paralympic team, have our battles in Beijing. If we did not come here, it would be like losing position, like capitulation.”

The Ukraine Paralympic team, one of the most successful teams per capita in the world, has been in China since the last days of February, thanks in part to Sushkevych’s logistical efforts. Now, they are refugees with a purpose.

“We’re here to represent our country,” said Oksana Shyshkova, who on Monday won Ukraine’s fourth gold medal in a cross-country ski event, “to glorify our country, to tell the world that Ukraine exists.”

Her passionate and doleful appeal was one of many made in the last few days by Ukrainian athletes after their races had ended, a far cry from their normal upbeat and buoyant mood after victory.

The Paralympics, very popular in Ukraine, are usually a time of celebration, good cheer and camaraderie for the athletes, like a holiday, Sushkevych said.

“Today, no,” he said with a wave of his hand. “I ask the athletes in the morning, ‘Did you sleep?’ I ask another, ‘Did you sleep?’ They say, ‘No, no.’ The have dull, sad faces. The mood is very difficult. We are all thinking of home.”

Sushkevych called the operation to transport the delegation of 54, including athletes, coaches and staff, to China during an invasion a small miracle. But now he has the reverse task. When the games end on Sunday, he must get everyone out of China.

But to where? Returning a large group to a country under siege is unlikely at the moment, so Sushkevych, his staff and his wife, Yuliia, spend much of their time devising parallel plans to move everyone safely to an undetermined European country, as a kind of staging ground.

Along with the International Paralympic Committee, they were also organizing an unusual and solemn demonstration for peace at the three athletes’ villages, most likely on Thursday.

He has come to be a kind of patron saint for disabled people in Ukraine, and many have recently reached out to him on social media or in text messages, asking for help.

He said that while in Beijing he received multiple texts from a woman who uses a wheelchair who was trapped on the 17th floor of a building that had been evacuated because the elevator was not operating. He said the texts stopped recently and when he called her, there was no answer. He feared the worst.

Sushkevych noted that the invasion was staged after the Olympics but during the Paralympics, “as if to say, it does not matter, we have no value,” he said.

Most of the Ukrainian athletes arrived in China from their training site near Milan, Italy, determined to raise awareness for the suffering taking place under a terrifying assault.

Ukraine has won eight medals, third-most behind China and Canada, after three days of competition, each one a chance to convey a message.

“With the means of sports, we can stand in front of you to tell the world what is going on,” Shyshkova said to reporters.

She described the relentless pressure and exhaustion under which the Ukrainian athletes are operating, and the physical and emotional toll of their isolation.

Protests in Russia. Amid antiwar rallies across Russia, the police said more than 3,000 people were arrested Sunday, the highest nationwide total in any single day of protest in recent memory. An activist group that tracks arrests reported detentions in 49 different Russian cities.

Another gold medal winner, Vitalii Lukianenko, 43, was so distraught and physically drained on the morning of his race on Saturday, that Sushkevych, the committee president, wondered if Lukianenko should race.

Lukianenko is from Kharkiv, a city under recent attack by Russia. His family has sought shelter underground.

“I look at his physical condition, eyes very red,” Sushkevych said. “I thought, no, he cannot race.”

But Sushkevych said that once at the starting line for his biathlon event, Lukianenko turned a switch in his mind, vowing to feel no pain or fatigue on the course, and he finished first in what is surely his last Paralympic Games.

“If you know situation, this was a miracle,” Sushkevych said.

All three medal winners in that race were from Ukraine.

But medals are not the only indication of courage and will. Juliia Batenkova-Bauman, 38, left her husband and daughter in Kyiv when she traveled to Italy to train, weeks before the invasion. She has been checking in with her family on an hourly basis when she is not racing or training.

“When I can talk to them, I can hear the shooting and sounds of bombings,” Batenkova-Bauman said through an interpreter, “and they can see the rockets from their window. It’s killing me from inside.”

Batenkova-Bauman, who spoke to several different news outlets, teared up in almost every conversation. She said she had barely slept for days, and when she did, she was haunted by nightmares.

Sushkevych has known Batenkova-Bauman for many years, and after he was told how she reacted after her race, he paused, excused himself and wiped tears from his cheeks and eyes with a tissue.

He knew Batenkova-Bauman was not in good condition to race, and he watched her fall twice in the 15-kilometer race. He implored her coach to pull her off the course, but the coach said he had already tried and failed. She finished fifth, outside of the medals.