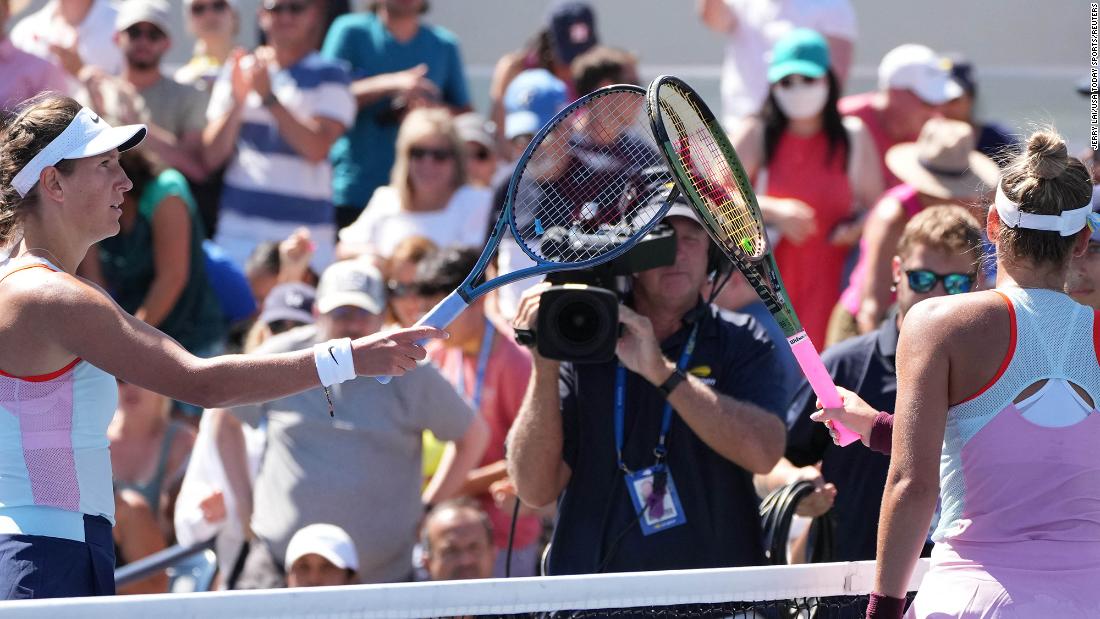 Kostyuk had told Azarenka via text before the second-round match that she intended to decline the usual post-match handshake given Belarus’ role in Russia’s invasion of Ukraine.

The pair instead tapped rackets at the net at the end of match, which Azarenka won 6-2 6-3.

“Don’t get me wrong, she’s a great competitor. But it has nothing to do with her being a human being,” she added.

Kostyuk is one of several Ukrainian players who have called on Russian and Belarusian athletes to denounce the Russian government’s decision to invade Ukraine if they want to compete in international competitions.

The country was used as a launch point for Russian troops in February and NATO officials have said the “vast majority” of Russian air operations in Ukraine are launched from Belarus — though Lukashenko has previously said his country was “being dragged” into the war.

“I wasn’t surprised. I don’t believe that making a big deal out of it is important,” Azarenka told reporters about the handshake, adding that it also happened when she faced Ukraine’s Dayana Yastremska in Washington last month.

“I always shake hands with my opponents … It is what it is. I just move on. I cannot force anybody to shake my hand. It’s their decision. How did it make me feel? It’s not the most important thing in the world right now.”

Ahead of this year’s US Open, the US Tennis Association (USTA) announced that Azarenka had been removed from participating in a “Tennis Plays for Peace” event to raise funds for Ukraine.

“Vika is a strong player leader and we appreciate her willingness to participate. Given the sensitivities to Ukrainian players, and the on-going conflict, we believe this is the right course of action for us,” said a statement from the USTA.

On Thursday, Azarenka said she is “open any time to listen, to try to understand, to sympathize” with Ukrainian players.

“I believe that empathy in the moment like this is really important, which has, again, been my clear message in the beginning,” she continued.

“I’m going to stand by that, because what’s happening in the world is very difficult right now, but we shouldn’t forget that we are all human and we should treat each other that way.”

This is not the first time tennis has become intertwined in geopolitics following Russia’s invasion of Ukraine.

Russian and Belarusian players, who are competing under neutral flags at the US Open, were banned from competing at Wimbledon earlier this year. The decision, however, proved divisive, and tennis’ governing bodies responded by removing ranking points from the tournament.

Azarenka, a three-time finalist at the US Open, will play Croatia’s Petra Martić in the third round on Saturday.