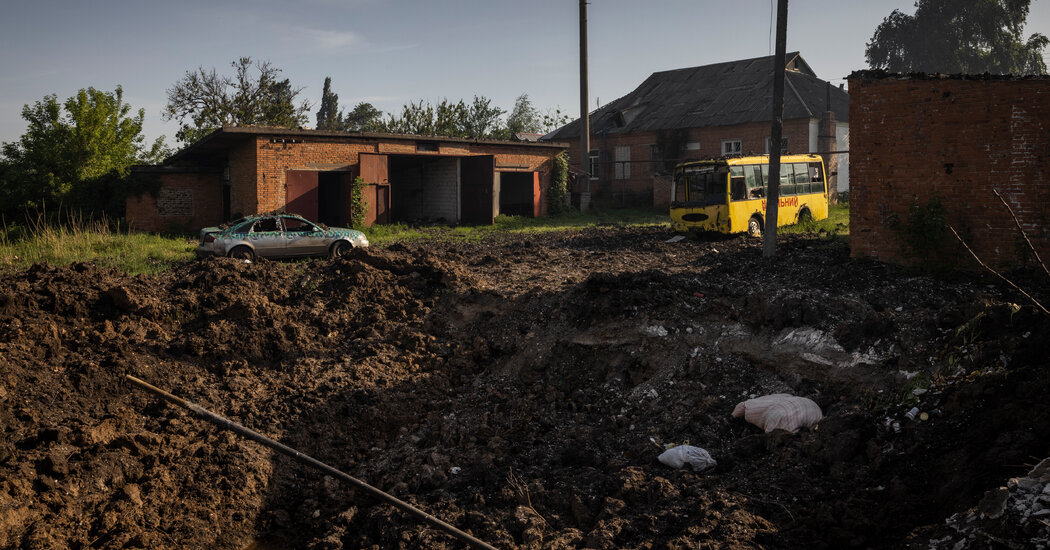 Volodymyr Titulenko has long been haunted by his early childhood memories of World War II. Now, at 82 years old, the artist is expressing his pain about the current war through his painting.

Mr. Titulenko’s home in the village of Rusaniv, an hour east of Kyiv, was on the front line between the Ukrainian military and the forces invading from Russia. With his wife and granddaughter in Kyiv making sure his work in a gallery there was safe, he spent two weeks sheltering in his village home alone.

Mr. Titulenko, who can see well out of only one eye, has been glued to television reports about the war, and that is reflected in his art.

After he returned to his studio in his flower-filled backyard, one of his first paintings was “Spring in Rusaniv,” which shows blossoming wildflowers in the foreground and flaming Russian tanks in the background. On the road near the tanks, the bodies of two Russian soldiers are splayed.

During a visit on Tuesday, Mr. Titulenko was painting fine brushstrokes on his latest work: “Mariupol ’22,” a large canvas depicting the destruction of the city and a Madonna-like figure cradling a child. He said he decided to paint it when he couldn’t get an image out of his head from the steel plant in the city where Ukrainian fighters held out for weeks. It was an image of Anna Zaitseva, who had been sheltering in the bowels of the steel plant since Feb. 25 with her infant son, Svyatoslav.

“I saw an image of a woman emerging from the Azovstal steel plant holding a child,” he said.

The mother figure had a halo around her head, a nod to another of his passions: icon painting.

Behind him, his granddaughter Eva was painting at a small easel. One of her paintings was going to be auctioned off to raise money for the Ukrainian army. Her mother was in Ukraine’s east volunteering to help the military.

Mr. Titulenko, who also carves wooden sculptures, has long painted political work along with his icons and bucolic landscapes. Some paintings hanging in his studio gallery satirize leaders like former President Viktor Yanukovych, who used his political position to become the richest man in Ukraine, and another businessman who became president, Petro Poroshenko. The two men are shown in one work roping off the country’s natural resources with a sign saying “New Tariffs.”

Nearby hung a painting of two small children standing before a heap of destroyed military hardware. The work was finished several years ago and was inspired by Mr. Titulenko’s childhood in postwar Berlin, where his father, a Soviet soldier, was stationed. During the war, he was with his grandparents in Ukraine, separated for several years from his mother, who was studying art in Moscow and had been evacuated to the Ural Mountains, and from his father, who had also been an art student in Moscow before being deployed to the front.

His mother eventually left Russia, posing as a nurse to pick up Mr. Titulenko in Ukraine before going to Berlin to reunite with his father, and he spent several years after the war in Germany. He did not expect to see childhood memories repeated in his old age, and he especially did not expect Russians to invade his home.

“My mother was from Russia,” Mr. Titulenko, who himself was born in the Russian capital while his parents were studying, said. “Who could expect someone would come from Russia to kill us?”

His wife, Ludmila, said she had a hard time understanding why Russia would invade.

“We always lived here peacefully, calmly,” she said. “No one had any problems with language or nationality; no one ever talked about it.”

Mr. Titulenko has one final major project in mind. “I will paint a mural to celebrate the Ukrainian victory,” he said.