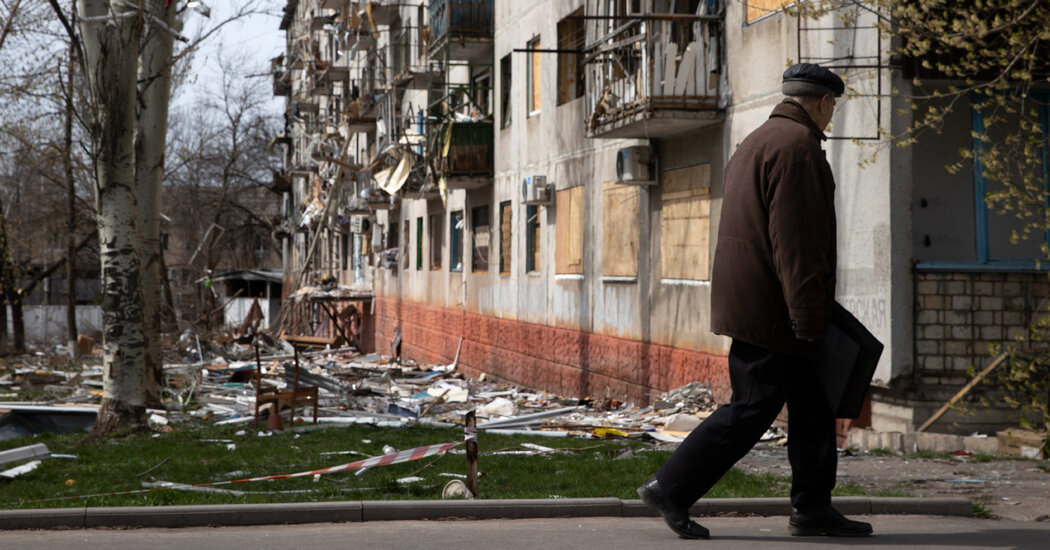 KRAKOW, Poland — Every week since the beginning of March, Evgeny has packed his car with box after box of medicine and driven from his home near Krakow to another Polish city, Rzeszow, near the border with Ukraine.

Evgeny said he was originally from Russia, but for the last 16 years, Poland has been his home. He lives there with his wife and is a Polish citizen. When the Russian invasion of Ukraine began in late February, he said he knew he had to do something.

He said he knows of other Russians in Poland who also have spent the last seven weeks, like many in their adopted country, joining grass roots efforts to provide housing, logistical support and other types of aid to those fleeing the war in neighboring Ukraine.

“For me, it’s simple. It’s not an internal conflict for me,” he said of reconciling his Russian identity — and concerns for family still living in Russia — with his desire to help Ukrainians. “I do not treat it like two opposing sides, as if my family is an enemy of the other side. This is not true,” he added, asking that his last name not be used out of concerns for his family’s safety.

More than 2.5 million people have crossed the border from Ukraine into Poland — most of them women and children — since the Russian invasion began, and their needs are immense.

When news of the Russian invasion broke, Evgeny said he was shocked.

“You have mixed feelings — of feeling angry, embarrassed, and no idea what to do next,” he said. “For five or six days I was completely empty inside.”

But Evgeny said he has a close friend in Ukraine, Oleksandr, who he said had saved his life when he was in a bad car accident in Ukraine eight years ago and has become like a brother.

“We got to know each other during the worst day of my life. He is a fantastic person, a pure patriot of Ukraine and a good person,” Evgeny said. When he heard the news of the Russian invasion, he said one of his first calls was to Oleksandr to make sure he was alive and to see what he needed, and what Evgeny could do to help.

Oleksandr is in an area of Ukraine that has remained relatively stable so far, and he is helping with the war effort. Evgeny said he has been in close contact with his friend to see what the needs are on the ground and is working with a network of his contacts to coordinate aid.

Now, his home office has become a logistics hub, he said, and he has dedicated all of his spare time outside of work to helping Ukrainians. He makes the 3-hour round-trip to Rzeszow at least once a week.

Evgeny, whose wife is a pharmacist, said much of his attention has been focused on getting medicines to Ukrainian refugees in Poland and sending them across the border into the country.

“At least I feel like I can do something,” he said.

Other Russian nationals have also joined these efforts. Igor Gerbeev, 34, who had been living in Moscow but moved to Poland in 2020, is among them.

“This country became like a dictatorship with no ability to say your own opinion,” he said of Russia. As someone who spoke out against the Kremlin online, he said the atmosphere had grown increasingly difficult.

“Russia is like a beautiful facade,” he said, but behind it is a lack of opportunity for young people like him and he no longer saw a future for himself there.

Since he came to Poland and found a new job with an IT company, he said he had grown close to a community of Ukrainian friends who had welcomed him with open arms when he knew no one in Krakow.

So when the Russian invasion began, he felt he had to take a stand.

“This is my duty. I have principles and I have vision,” Mr. Gerbeev said.

He said he had welcomed a family of five Ukrainians into his home for weeks before they moved on to stay with their family members in Germany. When the family arrived, Mr. Gerbeev said, the mother was nervous when she realized he was Russian. But she soon warmed up and was incredibly grateful.

Mr. Gerbeev, who described himself as just one small part of a wider aid effort, said he has been inspired by the tireless work of Ukrainians helping their fellow countrymen, even as they suffer the ravages of war.

He said he believes that long term, the war will destroy the lives of Russians as well as Ukrainians, because of punishing sanctions and international isolation of Moscow. Still, he said the majority of the people he knows back home still support President Vladimir V. Putin.

“It’s hard to speak with them. To many people in Russia, I am a traitor,” he said, adding that that would not stop him from doing all he can to aid Ukrainians in need. “It’s my duty as a human.”