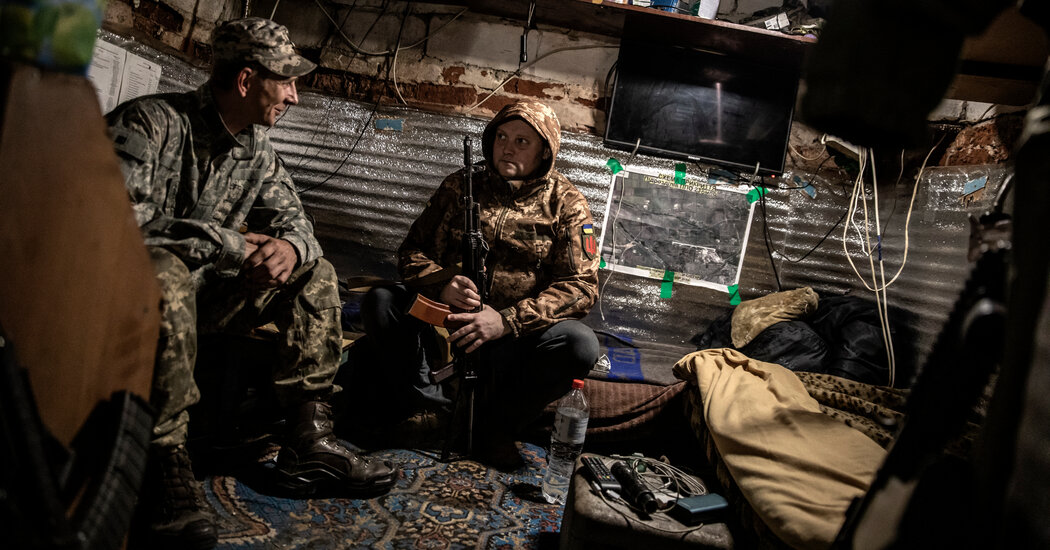 BRUSSELS — With Ukraine defending European values and security against a blatant Russian invasion, what obligation does the European Union and NATO have toward Ukraine?

The moral answer may be obvious, as European and American governments vow support for Kyiv and are pouring money and arms into Ukraine. But the practical answers are complicated, and are dividing Europe.

Defying expectations, the European Union has provided significant military aid to Ukraine and inflicted enormous sanctions on Russia, acting with speed and authority. But now it is confronting a more difficult question — how to bind vulnerable countries like Ukraine, Moldova and Georgia to Europe in a way that helps them and does not create a further security risk down the road.

It is a question that will hang over a summit meeting of E.U. leaders starting on Monday, and one made more urgent by Ukraine’s demand for fast-track accession talks to join the bloc, which may not be decided before another meeting in late June.

Despite pressure to fast-track Ukraine, full membership for it or the other countries on Europe’s periphery in either NATO or the European Union is unlikely for many years. But European leaders have already begun discussing ways to slowly integrate them and protect them.

President Emmanuel Macron of France and Prime Minister Mario Draghi of Italy have in recent weeks both talked of a new confederation with the European Union, as opposed to the old notion of a core group and a periphery, or a “two-speed Europe,” which newer members reject as creating a second-class status.

In his speech on “Europe Day,” May 9, to the European Parliament, Mr. Macron floated a more formed, if still vague, proposal for a new kind of arrangement.

“The war in Ukraine and the legitimate aspiration of its people, just like that of Moldova and Georgia, to join the European Union encourages us to rethink our geography and the organization of our continent,” he said.

Mr. Macron offered a sweeping vision of a new European Political Community — an outer circle of European states, including Ukraine, Georgia, Moldova and Britain — that would be linked to the European Union but not part of it.

Such a wider circle of European states would allow Brussels to bring vulnerable countries along Russia’s border into the European fold more rapidly than full E.U. membership, which “would in reality take several years, and most likely several decades,” Mr. Macron said.

Such a “political community” would, he said, “allow democratic European countries that believe in our core values a new space for political cooperation on security, energy, transport, infrastructure investment and free movement of people, especially our young people.”

The idea of concentric rings or “tiers” of European states, of a “multispeed Europe,” has been suggested several times before, including by a former French president, François Mitterrand, in 1989. Then, though, the idea included Russia; it went nowhere. Mr. Macron has himself brought it up before. But now, with Russia on the march, it is the time to make it real, he said.

In February, four days after the Russian invasion, Ukraine formally applied to join the bloc, and in March, E.U. leaders “acknowledged the European aspirations and the European choice of Ukraine.”

On April 8, in Kyiv, Ukraine’s capital, Ursula von der Leyen, the president of the European Commission, told President Volodymyr Zelensky of Ukraine, “Dear Volodymyr, my message today is clear: Ukraine belongs in the European family.” She said, “This is where your path toward the European Union begins.”

But even if European leaders decide to open negotiations with Ukraine, the process will be long, despite support for immediate membership from countries like Poland and the Baltic states.

On May 22, Clément Beaune, France’s Europe minister, told French radio: “I don’t want to offer Ukrainians any illusions or lies.” He added: “We have to be honest. If you say Ukraine is going to join the E.U. in six months, or a year or two, you’re lying. It’s probably in 15 or 20 years — it takes a long time.”

The Austrian foreign minister, Alexander Schallenberg, said that given the difficulties, Ukraine should be offered “another path” in its relationship with Brussels.

Mr. Zelensky has sharply rejected any other path than accelerated full membership for Ukraine in the European Union. But his demand is unlikely to be met.

Even opening accession talks with Ukraine is controversial because Georgia and Moldova also applied after the invasion, and other countries are long stuck in the process. Turkey applied in 1987, North Macedonia in 2004, Montenegro in 2008, and Albania and Serbia in 2009. All have started accession negotiations.

Even Bosnia-Herzegovina has applied, and Kosovo wants to.

And yet there has been no E.U. enlargement since 2013, in part because of the trouble already integrating poorer members like Romania and Bulgaria, and because the criteria for joining are so onerous.

The current 27 member states are having enough economic trouble themselves, let alone trying to keep Hungary and Poland in line with European values and the rule of law.

“Countries like Ukraine, Georgia and Moldova are fragile and won’t get E.U. or NATO membership soon,” said Claudia Major, a defense analyst with the German Institute for International and Security Affairs. “If we are honest, we have no security guarantees for them.”

There can be closer relations with Brussels in sectoral fields like education, power grids, trade and economics, in some sort of partnership below membership, she said. “But I’m not sure it would deter Russia,” she continued. “After all, why do Finland and Sweden want NATO? Because there they have the United States.”

The lesson, she said, is that “nuclear deterrence and U.S. capabilities keep us safe in Europe.”

“We can offer these countries all kinds of support, but not enough to save them,” Ms. Major said. “We can’t offer them the life insurance they want.”

A fast-track for Ukraine would likely further alienate the states in the Western Balkans, where the slow and cumbersome enlargement process “has disillusioned many while Russia and China have expanded their influence in the region as a result,” said Julia De Clerck-Sachsse of the German Marshall Fund in Brussels.

Proposals like Mr. Macron’s “can help kick-start a wider discussion” among European leaders about how to better help and protect those who are not yet members, she said.

“At the same time, they need to be careful that such ideas are not interpreted as a sort of ‘enlargement light’ that will undermine aspirations to full membership and further alienate” countries already disappointed by the process.

A harsher view is that Mr. Macron is trying to park new aspirants in some permanent holding pen to preserve French influence in Brussels.

“To this end, he floated the idea of​​ a Brussels Limbo in which the candidate countries could stew until Judgment Day,” wrote Eric Gujer, editor of the Neue Zürcher Zeitung. “He calls this a ‘European political community’ as a complement to the European Union. That sounds sympathetic and sufficiently vague, but the ultimate goal is obvious.”

“The debate is only beginning,” said Rosa Balfour, the director of Carnegie Europe. “Don’t expect a plan.” There are discussions, she said, to “integrate these countries more gradually, or sector by sector,” including entrance into the single market.

But there is also concern that some “membership light” will undermine the powerful force for internal reform of candidate countries to meet the E.U.’s strict membership criteria, damaging the bloc’s soft power.

Pierre Vimont, a former French ambassador to Washington and a fellow with Carnegie Europe, thinks it would be best to simply open the European Union to all aspirants. But the “real issue,” he said, “is that an E.U. of 35 members can’t go on in the same way,” requiring serious institutional reform and treaty change to function.

For now, he said, “no one has the answer.” But he cautioned that “we cannot neglect Russia or forget it — we’ve done that for years, and it has not turned out very well.”

“We need to face that question openly,” he said, “and come up with new ideas.”