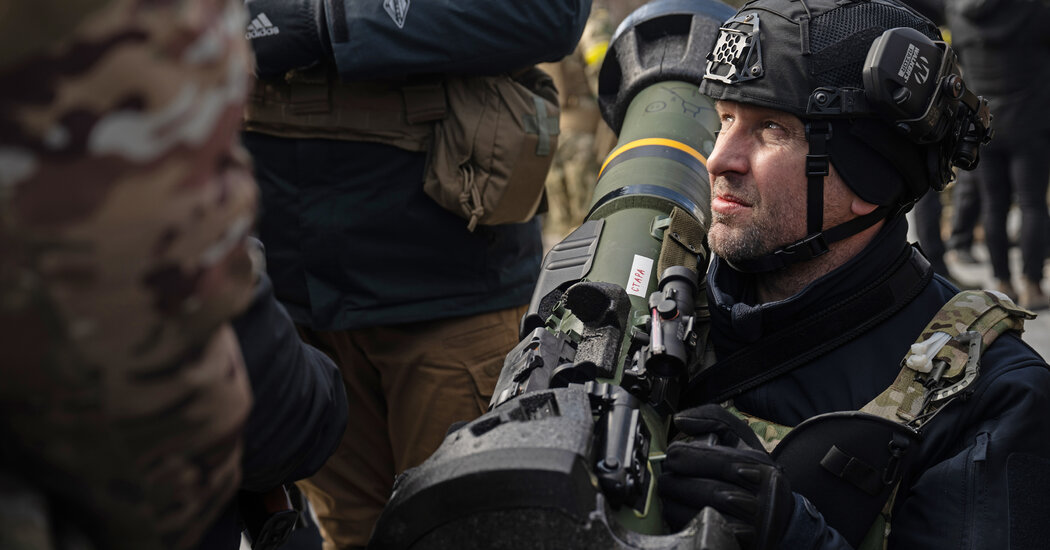 In video after video taken in Ukraine, a puff of smoke and a brief flash of light signal that another clutch of Russian troops are about to die.

Sometimes it is only a split second before that light streaks to a tank or armored vehicle that suddenly erupts in smoke and flame, often bursting from within as ammunition inside explodes.

Rewinding these videos a bit often shows Ukrainian soldiers before the attack, patrolling to an ambush point with large green tubes carried on their backs — each one a gift from Britain. In perhaps 15 seconds, and sometimes even faster than that, the soldiers can unsling the weapon, unfold its aiming sight, release a safety catch and wait for their prey to appear.

The green tubes are called NLAWs, for Next Generation Light Anti-Tank Weapons. They are the result of decades of weapons research dedicated to building small lightweight guided missiles that may have evened the balance of power in combat between the fearsome tank and the soldier.

Compared to the American-made Javelin antitank weapon, which has been hailed by officials at the Pentagon and the White House and sent to Ukraine by the thousands, the NLAW weighs about half as much, costs far less, can be easily discarded, and is optimized for use in the relatively short-range fights Ukrainian soldiers are getting into with the invading Russian forces.

The NLAW is a product of the Swedish company Saab and has been sold to a number of NATO countries — including Britain, which assembles the missiles at a factory in Belfast, Northern Ireland, for the British Army. And although the British Army also has the Javelin, it began purchasing NLAWs about 10 years ago and has been sending them to Ukraine in ever greater numbers.

A British diplomat, who spoke on the condition of anonymity to discuss defensive aid, said Britain had sent more than 4,200 NLAWs to Ukraine.

“We still assess it to be one of the best short-range defensive anti-tank weapons around,” the diplomat said.

The Javelin and the NLAW, both of which an individual soldier can carry and fire, include features previously only seen in much larger and more cumbersome weapons, the kinds that usually have to be mounted on vehicles.

Both weapons can be fired directly at targets like enemy soldiers or a building, but when attacking vehicles they can also be programmed to hit from above — where a tank or armored personnel carrier has the least armor. The American weapon can pop up and then dive down to impact and explode, while the British missile flies a shorter path — crossing over its target and firing its charge downward.

The result, however, as shown in Ukraine is the same: an uncounted number of destroyed Russian tanks, armored personnel carriers and trucks.

The missiles have succeeded despite efforts to defeat them. The Russian military had said, and Pentagon leadership believed, that a defensive system on the newest T-90 tanks was capable of sensing and destroying anti-tank missiles like Javelins and NLAWs in flight. In an apparently new countermeasure, Russian troops are welding improvised cages of parallel steel bars atop tank turrets. Video evidence shows that both defenses, however, have failed.

The Biden-Xi talk. In a two-hour call with China’s President Xi Jinping, President Biden discussed the Russian invasion of Ukraine, detailing the implications and consequences if Beijing were to provide material support to Russia in its attacks.

An attack in the west. A missile strike rattled the outskirts of Lviv, a western city that has been a haven for people fleeing areas under siege. The mayor of the city said several missiles had struck an aircraft repair plant at the airport in Lviv, destroying the buildings.

A looming energy crisis. The International Energy Agency said that the repercussions of Russia’s invasion of Ukraine are likely to intensify over the next several months, and nations around the world should respond by reducing their use of oil and gas.

The Javelin, which was designed toward the end of the Cold War, consists of two parts: a 15-pound reusable launcher that soldiers often use for reconnaissance and surveillance, given its suite of thermal cameras that can zoom in and out for finding targets, and a 33-pound disposable tube that contains the missile itself. The newer NLAW, by comparison, weighs just under 28 pounds and has no camera — just a simple sight to aim.

And while the Javelin can kill tanks from as far away as two and a half miles, its missile flies slower than the NLAW, which is most accurate for targets up to only about a half mile away. For moving targets, the Javelin can guide itself while in flight, thanks to a heat-seeker in the missile’s nose, whereas a soldier firing an NLAW simply points the weapon at a moving vehicle, engages the guidance system and tracks the target for a few seconds before firing. The missile then flies to a point where it predicts the target will be.

The capabilities of the two weapons make the Javelin more like a sniper rifle for taking out armored vehicles at extreme distances, the British diplomat said, while the NLAW is better for close-quarter battles and ambush scenarios.

Given that the Ukrainians are unable to fight Russian armor with tanks of their own, they must use different tactics, the diplomat said, adding that the Ukrainians have shown the will and the extraordinary nerve to get close to tanks and destroy them in these missile attacks.

“You need to know how to fight, and you need the means, but it’s the will — what’s in the heart of the Ukrainians to fight?” the diplomat said. “They’re fighting an existential threat and they’re not giving up. So we’ve given them, at their request as a sovereign nation, the tools to go and do this.”