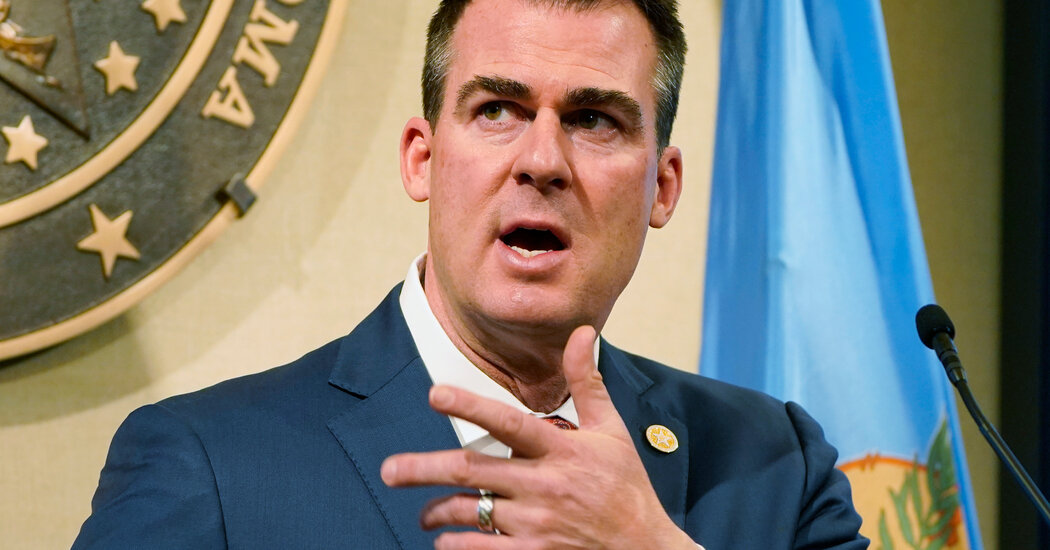 Gov. Kevin Stitt of Oklahoma has been ousted from a fee set as much as commemorate the centennial of the 1921 Tulsa race bloodbath, simply days after he signed laws that fee members stated would undermine their purpose of instructing the state’s painful historical past of racial discrimination.

In a press release on Friday, the 1921 Tulsa Race Massacre Centennial Commission stated its members had met on Tuesday and had “agreed through consensus to part ways” with Mr. Stitt, a Republican. The assertion didn’t supply a purpose however stated that no elected officers or representatives of elected officers had been concerned within the choice.

“While the Commission is disheartened to part ways with Governor Stitt, we are thankful for the things accomplished together,” the assertion stated. “The Commission remains focused on lifting up the story of Black Wall Street and commemorating the Centennial.”

Carly Atchison, a spokeswoman for Mr. Stitt, didn’t instantly reply to an electronic mail message on Friday searching for remark. She informed The Associated Press that the governor had discovered of his elimination from the fee solely when the panel issued its assertion. She stated that the governor’s position had been “purely ceremonial, and he had not been invited to attend a meeting until this week.”

Mr. Stitt was faraway from the fee after he signed legislation on May 7 that may ban the instructing of sure ideas about race in Oklahoma colleges, a measure that was seen as half of a bigger conservative backlash to the instructing of “critical race theory.”

Commission members had vocally opposed the laws, and one among them, State Representative Monroe Nichols, resigned from the panel on Tuesday, saying the governor’s signing of the invoice had “cast an ugly shadow on the phenomenal work done during the last five years.”

“Governor Stitt has chosen to align himself with folks who want to rewrite or prohibit the full intellectual exploration of our history, which is in direct conflict with the spirit of the commission I joined several years ago,” Mr. Nichols, a Democrat, wrote in his resignation letter.

Phil Armstrong, the venture director of the Centennial Commission, had additionally criticized the laws, writing in a letter to Mr. Stitt that it “chills the ability of educators to teach students, of any age, and will only serve to intimidate educators who seek to reveal and process our hidden history.”

“How do you reconcile your membership on the Centennial Commission with your support of a law that is fundamentally contrary to the mission of reconciliation and restoration?” Mr. Armstrong wrote in the letter, dated Tuesday.

The law bans Oklahoma academics and college directors from requiring or making a part of a course quite a lot of ideas about race. The banned ideas embrace the notion that any individual “by virtue of his or her race or sex is inherently racist, sexist or oppressive, whether consciously or unconsciously.”

It additionally bans instructing of the ideas that an individual, “by virtue of his or her race or sex, bears responsibility for actions committed in the past by other members of the same race or sex” and that “meritocracy or traits such as a hard work ethic are racist or sexist or were created by members of a particular race to oppress members of another race.”

The legislation additionally says that college students in Oklahoma’s public greater training system can’t be required to interact “in any form of mandatory gender or sexual diversity training or counseling.”

“Now, more than ever, we need policies that bring us together — not rip us apart,” Mr. Stitt stated in a videotaped statement explaining his signing of the invoice. “As governor, I firmly believe that not one cent of taxpayer money should be used to define and divide young Oklahomans about their race or sex.”

He added that the invoice endorsed the instructing of the state’s tutorial requirements, which have been written by Oklahoma educators, and embrace occasions just like the Tulsa race bloodbath, the emergence of Black Wall Street, Oklahoma City lunch counter sit-ins and the Trail of Tears.

“We can and should teach this history without labeling a young child as an oppressor or requiring he or she feel guilt or shame, based on their race or sex,” Mr. Stitt stated.

The Centennial Commission was shaped in 2015 to commemorate and educate residents about the 1921 massacre, by which white mobs slaughtered Black residents in Tulsa and destroyed a affluent Black enterprise district, referred to as Black Wall Street.