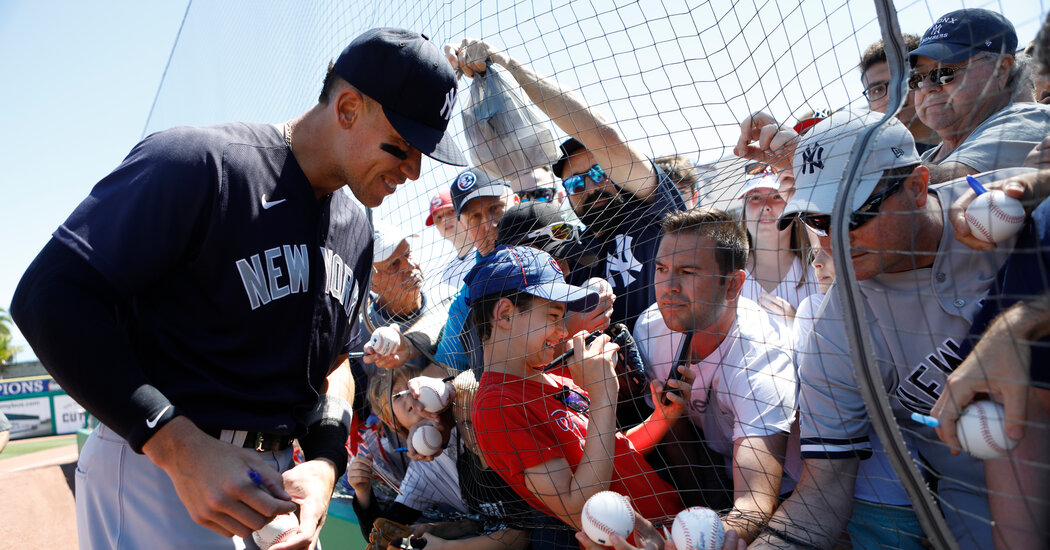 TAMPA, Fla. — The strongest division in baseball history — one through four, anyway — looks daunting again. Four American League East teams earned more than 90 victories last season, a first for divisional play, which dates to 1969. Now the Yankees, the Boston Red Sox, the Tampa Bay Rays and the Toronto Blue Jays are back for more.

“Whoa — pack a lunch, baby,” said Aaron Boone, the Yankees’ manager, in his office at Steinbrenner Field the other day. Then Boone turned impish: “Well,” he added, “it sounds like we’re all fighting for second. Sounds like the Blue Jays are just —”

He trailed off, but the point was clear: the Yankees have noticed that Toronto — anecdotally, at least — has been prematurely crowned as the favorite. But didn’t the Blue Jays, who missed the playoffs by a game last season, at 91-71, lose a Cy Young Award winner and a record-setting infielder to free agency?

“Apparently not,” Boone said, with a smile. “But they are good. I mean, this division is always good, but it feels really good.”

The Blue Jays played the Yankees here on Saturday, and the game went about as you’d expect, with seven combined homers and 19 total runs. The Yankees’ Giancarlo Stanton smoked a 117-mile-per-hour laser over the left field wall. Josh Palacios, a Blue Jays reserve outfielder from Brooklyn, cleared the pavilion with a rocket to right. Toronto won, 10-9.

“Towards the end of last year, no one really wanted to play us,” said Blue Jays infielder Cavan Biggio, who also homered on Saturday. “The shape of our team was finally coming into the picture, and people were noticing that, ‘Hey, this is a pretty dangerous team.’ I think this year it’s kind of like, ‘OK, now it’s time, we’ve got to watch out for the Blue Jays.’ And our mind-set has been there. We feel like we’re the best, and we’re going to play with a lot of fun and a lot of energy.”

Robbie Ray took his Cy Young Award to Seattle. Marcus Semien — who set a record for homers by a second baseman, with 45 — landed with Texas. Starter Steven Matz parlayed a career year into a deal with St. Louis.

But the Blue Jays pivoted to strong replacements: Kevin Gausman and Yusei Kikuchi for the rotation, Matt Chapman for the infield. With lineup fixtures like Bo Bichette, Vladimir Guerrero Jr., Teoscar Hernández and George Springer, Toronto has earned the hype.

“The young guys that they’ve got over there, especially Vlad and Bichette, those guys are just going to continue to get better,” said the Yankees’ Aaron Judge. “They’ve got a great outfield, a great infield core. They’re going to be a tough opponent all year, so we’re looking forward to facing them quite a bit.”

How often will Judge be allowed to face them? He has sidestepped direct questions about his vaccination status, but the Canadian government will not allow players into the country unless they are vaccinated against the coronavirus. The Yankees play nine games in Toronto this season, three each in May, June and September.

Every victory was precious for the Yankees last season, when they edged the Blue Jays for a wild-card spot by one game. As they prepare to offer Judge a contract extension before opening day on April 7, the Yankees would be wise to make the vaccine a condition of his signing. The Red Sox did this with infielder Trevor Story, according to ESPN, a logical request for a $140 million player in a team sport.

Judge should command much more from the Yankees than Story got from the Red Sox. He has few peers as a slugger: Since 2017, only Mike Trout and Juan Soto have a higher on-base plus slugging percentage than Judge’s .954 (minimum 2,000 plate appearances). To forgo free agency, will Judge need a record average annual salary for a position player? The standard is Trout, at a little more than $35.5 million per year with the Los Angeles Angels.

“I want to be here,” said Judge, who turns 30 next month. “Whether we can lock that up and get a chance to play here for quite a few more years, that’d be great. But if it happens, it happens. If it doesn’t, it doesn’t. I’m not too worried.”

Judge and the Yankees have still not agreed on a 2022 salary: Judge has asked for $21 million in arbitration, and the Yankees have countered at $17 million. That dispute will end if the sides agree on a long-term deal, and General Manager Brian Cashman told reporters Saturday that extension talks would conclude before the opener.

Judge hedged a bit on that deadline — “We haven’t decided yet, but for right now that’s what we’ve got,” he said Saturday — but in any case, he will have at least one more chance to fulfill the Yankees’ dream from December 2017. That was when they traded for Stanton, hoping for a modern Mantle-and-Maris tandem to power them back to the World Series.

Could it finally happen in 2022? For now, anyway, a healthy, well-stocked lineup is not the problem. Pitching is Boone’s immediate concern, with the shortened exhibition schedule holding back starters from their usual workload. An expanded early roster, with 28 active players, will help.

“I think it’s starters and where they need to be built up to — how do you fill in those first couple of weeks?” Boone said. “Our five starters will probably be built up to 65, 75 pitches at that point, so having those extra couple of arms will help.”

The rotation is not especially imposing after Gerrit Cole, yet all the A.L. East teams have pitching questions. This is the lumber division, deep and densely packed, where a factor like a vaccine mandate could make a big difference.

The Blue Jays have said they are not worried about the impact of Canada’s rule on their own roster. As for a competitive edge on unvaccinated rivals, they might not even need it.

“I feel like our fans are the best in baseball, especially when we’re good and we’re packing the house,” Biggio said. “So definitely looking at it from that standpoint, we’ll have an advantage. But from the vaccine standpoint, we don’t feel like we need that advantage just because we know how good we are as a team.”

Pack a lunch, baby. This should be fun.