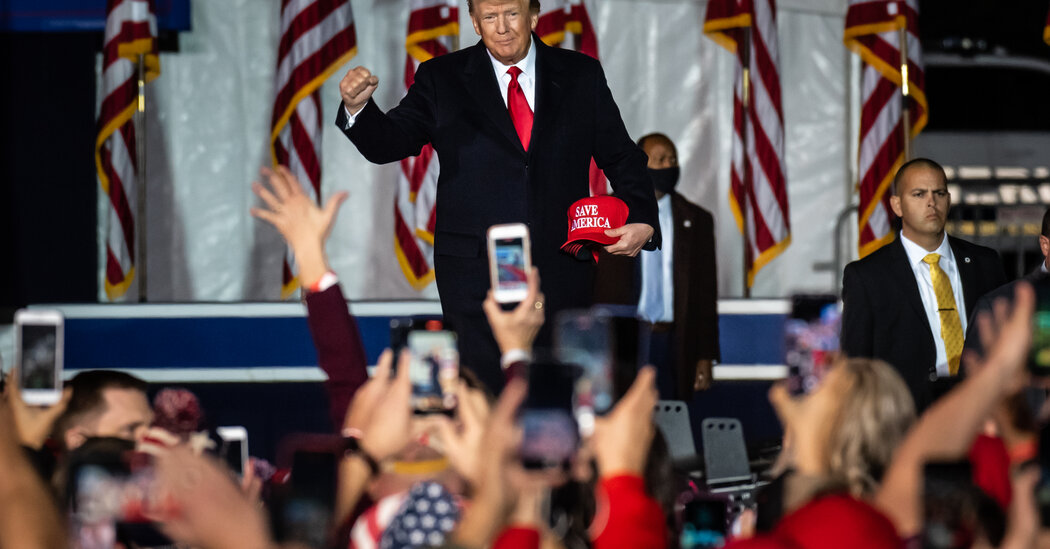 CONROE, Texas — Donald J. Trump said on Saturday that if elected to a new term as president, he would consider pardoning those prosecuted for attacking the United States Capitol on Jan. 6 of last year.

He also called on his supporters to mount large protests in Atlanta and New York if prosecutors in those cities, who are investigating him and his businesses, take action against him.

The promise to consider pardons is the furthest Mr. Trump has gone in expressing support for the Jan. 6 defendants.

“If I run and I win, we will treat those people from Jan. 6 fairly,” he said, addressing a crowd at a fairground in Conroe, Texas, outside Houston, that appeared to number in the tens of thousands. “We will treat them fairly,” he repeated. “And if it requires pardons, we will give them pardons, because they are being treated so unfairly.”

At least 700 people have been arrested in connection with the Jan. 6 insurrection, including 11 who have been charged with seditious conspiracy. Some have said they believed they were doing Mr. Trump’s bidding.

As president, Mr. Trump pardoned a number of his supporters and former aides, including Michael T. Flynn, his first national security adviser, who twice pleaded guilty to lying to the F.B.I., and Stephen K. Bannon, his onetime campaign manager, who was charged with defrauding donors to a privately funded effort to build a wall along the Mexican border.

In his Saturday speech, Mr. Trump took aim at the New York State attorney general and the Manhattan district attorney, both of whom have been investigating his businesses for possible fraud, and at the district attorney in Fulton County, Ga., who is empaneling a special grand jury to investigate Mr. Trump’s efforts to overturn the 2020 election results in that state.

He urged his supporters to organize large protests in New York and Atlanta, as well as in Washington, if those investigations lead to action against him.

“If these radical, vicious, racist prosecutors do anything wrong or corrupt, we are going to have in this country the biggest protests we have ever had,” he said.

The event in Conroe drew Trump supporters from across Texas and as far away as New Jersey and Washington State, some of whom had camped out at the fairground for several days. For much of Saturday, a festive atmosphere prevailed, with billowing flags and omnipresent T-shirts declaring “Trump 2024.”

As his speech stretched on past an hour, Mr. Trump’s rhetoric grew more pointed, and his attacks on the news media more belabored. “The press is the enemy of the people,” he said, prompting angry boos, adding: “The corrupt media will destroy our country.”