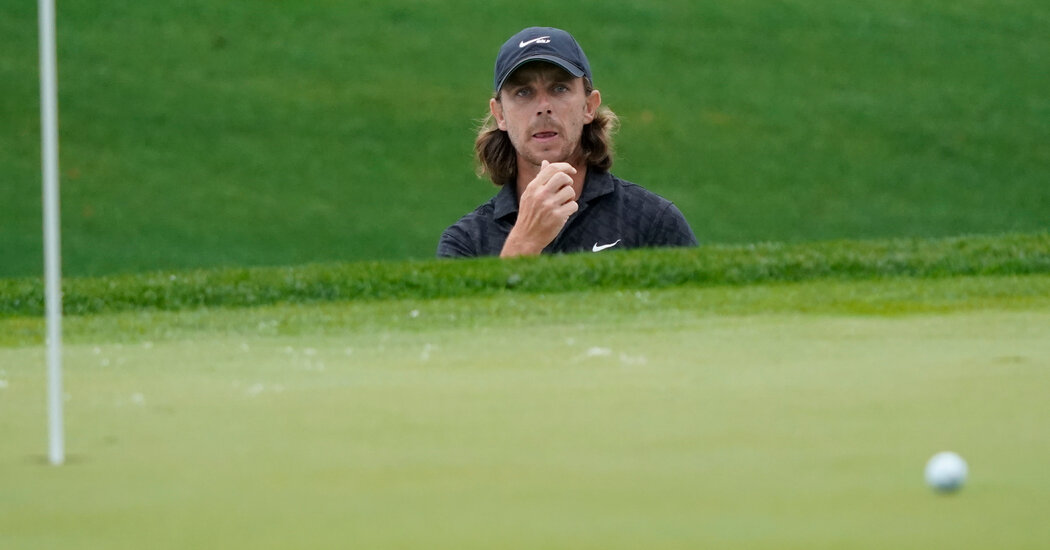 PONTE VEDRA BEACH, Fla. — Tommy Fleetwood, a golfer once ranked in the men’s top 10, has been missing from a PGA Tour leaderboard for so long, fans may not have recognized him when he vaulted into first place during the first round at the Players Championship here on Thursday.

Fleetwood has also shaved his trademark — and popular — frowzy beard. And it turns out the facial hair is missing, in part, because of his recent two years of jagged play, which resulted in Fleetwood losing his PGA Tour playing privileges.

“I was in a really bad mood,” Fleetwood, 31, said. “It was break some golf clubs or shave my beard. I went for the beard.”

Fleetwood, a winsome Englishman best known for his shoulder-length hair and second-place finish at the 2018 U.S. Open at Shinnecock Hills, played like his old self for 18 holes on Thursday. His six-under-par 66 was one of the lowest scores among the several dozen golfers who finished a first round that was twice delayed by heavy rain and thunderstorms.

When play was suspended because of darkness on Thursday night, Fleetwood was tied atop the leaderboard with Tom Hoge. Roughly half the field did not complete their rounds and will hope to tee off early Friday morning, though there is more rain in the forecast.

But Fleetwood’s usual sunny disposition broke through, and his golf backstory would be relatable to anyone who has played the game recreationally or professionally. While he spent more than 15 minutes trying to explain how one of the world’s best golfers had sunk into an on-course funk that at one point dropped him to 137th in the FedEx Cup rankings, he also smiled and simplified.

“It’s just a strange game that you never seem to be able to understand or that makes no sense,” Fleetwood said with a laugh.

While he admitted to being somewhat lost in a golfing abyss, he refused to be downtrodden.

“I still have one of the best jobs in the world,” Fleetwood said. “I’ve just not been performing to the level that I want to perform at. Again, I’m not going to sit here and moan or complain about playing poorly for a couple of years.”

Fleetwood, who plays on both the PGA and European tours, offered some explanations for his drop from the world’s ninth-ranked player in 2018 to 49th entering this week’s Players Championship.

“There’s been certain things in my swing that I haven’t quite understood,” he said. “So then your confidence takes a hit because you’re not quite comfortable out on the golf course. It adds up.”

He added: “My results haven’t been terrible, but I’ve lacked obviously very good results. And then I think especially from a world ranking standpoint, that makes it very, very difficult. So I’ve just sort of been gradually declining.”

Traveling the world to play on two tours has not helped.

“You’re playing minimal events on both tours,” Fleetwood said. “Even in my best years, I was always starting way behind the 8-ball just to play consistently throughout those years. Again, it’s hard to make headway. And when you’re not seeing good scores and the shots aren’t quite there, it just becomes harder and harder for it to change that momentum.”

For Fleetwood, like most golfers, the game mystifies. And that goes for even the best of the best. He did not, for example, come to Florida expecting to be leading the Players Championship at any point. Late Thursday afternoon after his round, he talked about playing “dreadful” lately — but then birdied his first two holes.

That may have brought some good karma, but it was halted when inclement weather forced a delay of more than three hours. Fleetwood, however, was undeterred.

“I was quite happy when the delay came,” he said. “You knew a delay was coming anyway, so I took the break and later I got to practice. Then I started the day by holing a putt and got going again.”

The rain-soaked fairways and greens made conditions challenging, but Fleetwood remained unfazed, clocking three more birdies in his next nine holes. He finished with a birdie on the par-5 16th hole and another on the treacherous 18th. The close left him grinning, but he would not predict future results, not after the last two years. Looking ahead to his next round, he said: “I might play terrible, I might play great. We’ll see.”

Fleetwood was much more certain about the eventual fate of his once-famous beard.

Asked if his wife, Clare, likes him clean shaven or with facial hair, he answered: “She definitely has a preference, and it’s not this one.”

Fleetwood does think he looks younger without the beard. He was playing in a tournament with his fellow tour players Viktor Hovland and Collin Morikawa on his 31st birthday in January, he said, when the duo looked at him and told him: “We had to Google your age. I thought you were 37, 38.”

He added: “Everyone kind of noticed that I look a lot younger without the beard.”

But then Fleetwood had a final thought.

“Clare definitely prefers me with a beard, so I’ll definitely grow it back,” he said. “As long as I can keep my temper and keep smiling, then I won’t have to shave it off again.”