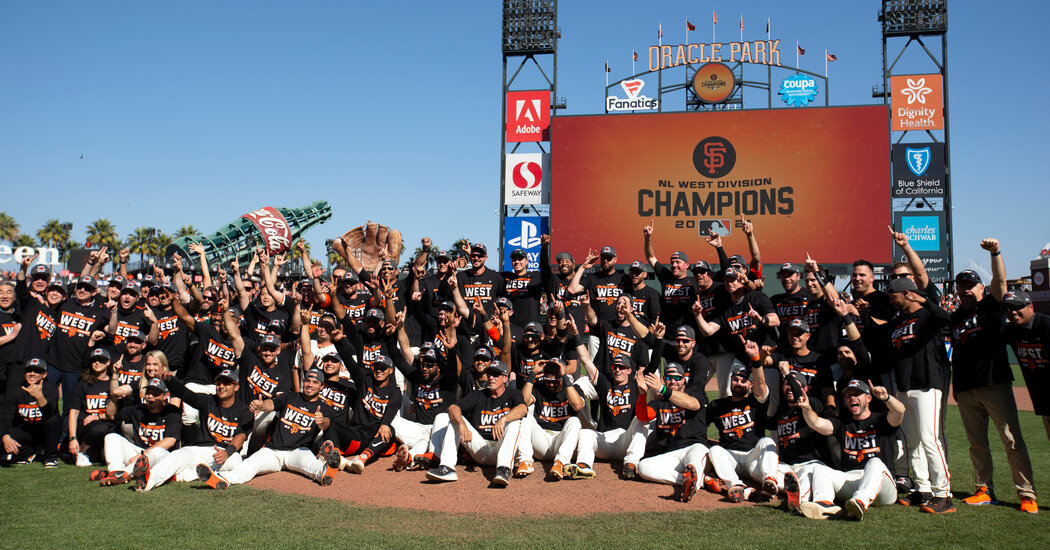 SAN FRANCISCO — Before the San Francisco Giants rolled to a best-in-baseball 107 wins last year, ended the Los Angeles Dodgers’ eight-year run of National League West titles and looked like geniuses, there was a seemingly wild idea that had come a year earlier.

What if, Manager Gabe Kapler asked his new boss, we expanded the coaching staff? Like, really expanded it, to 13 total coaches? Kapler, who had been given the seemingly impossible task of replacing Bruce Bochy, explained his vision, likening it to the importance of having a robust pupil-to-teacher ratio in school. The smaller the class size, the more the students benefit.

“And I thought, well, this isn’t grade school, this is the big leagues,” said Farhan Zaidi, the Giants’ president of baseball operations.

But the more Kapler lobbied, the more he made sense.

“It was really thinking out of the box because it wasn’t going just one or two coaches beyond the norm,” Zaidi said. “Look, I had my skepticisms. I thought, ‘Are we going to have enough to do for all of these people?’ But, it turned out, it was a really good analogy.”

For most of Bochy’s 13 years, in which he piloted the Giants to three World Series championships in a five-season span, he worked with what had been the standard in baseball for decades: six coaches. They were bench, hitting, pitching, first base, third base and bullpen. By 2019, his final season, the Giants had added an assistant hitting coach and, in deference to the new replay rules, a “coach/video replay analyst.”

That does not seem all that long ago, but given the way the game has changed, it may as well be the videocassette recorder era before the digital age.

“It may be a little bit outside the box, but outside the box increasingly is inside the box,” said Larry Baer, the Giants’ president and chief executive whose approval of the increased coaching budget brought enormous returns last summer.

Indeed, in an industry in which success begets copycats, 13 teams list coaching staffs in double digits this year. Cincinnati has matched San Francisco with 13 coaches. The Phillies, the Cubs and the Diamondbacks are at 12 each; the Red Sox and the Angels have 11.

“Teams are paying a lot of attention to the support they can provide players and recognize that there are a lot more resources at our disposal as organizations than there were 15 years ago,” said Chris Antonetti, Cleveland’s president of baseball operations, whose Guardians employ eight coaches.

The topic is not Kapler’s favorite, largely because he is uncomfortable being given credit for an idea that is taking root in the game. Yes, he said, he might have 13 coaches, but he would prefer people to point out that it was his players who won 107 games.

Plus, to him, the idea of expanding a coaching staff is just common sense.

The idea is to tailor agendas to the needs of individual players and to make sure communication flows two ways. When Brandon Belt, Darin Ruf and LaMonte Wade Jr. take ground balls at first base, each may want to focus on a different skill on a particular day. Perhaps shortstop Brandon Crawford wants a lighter workload, but Mauricio Dubón wants more strenuous pregame preparation. New hire Pedro Guerrero gives the Giants a Spanish-speaking hitting coach to serve those players in the dugout during games, bypassing the need for a translator.

A crucial philosophy is having the players become “co-pilots” in their careers, said Kai Correa, the bench and infield coach, who added that the Giants want them to become “just as much chefs as consumers” in their ongoing development.

“We spend as much time using our ears as anything else,” Correa said.

Just three of the coaches played in the majors — Andrew Bailey (pitching coach), Brian Bannister (director of pitching) and Antoan Richardson (first-base coach). Only five of the 13 had even been on a major league coaching staff. Kapler got to know some of them during his four years as the Dodgers’ director of player development from 2014-17. Others he knew of, either by reputation or the five-star reviews of colleagues, and he made it a point to recruit them.

“It was a longtime listener, first-time caller deal,” said J.P. Martinez, the assistant pitching coach who was hired last year after Ethan Katz left to become the Chicago White Sox pitching coach. “I paid attention to his career, had heard stories in the minor leagues about his intensity and commitment to fitness and nutrition.”

Martinez added that when Kapler managed in Philadelphia in 2018 and 2019, “The impression is he was making calls off spreadsheets, and one of the things he preached strongly to Bails and me last year was don’t get too locked in on matchups to where you don’t watch the game and we don’t pay attention to the vibe in the dugout and what we’re feeling from players.”

Martinez came from Minnesota’s organization, where the Twins connected old-school baseball men such as the former managers Sam Perlozzo and Mike Quade with analytics experts such as Josh Kalk, the organization’s pitching guru.

“When I landed here it was the perfect intersection between the two,” Martinez said. “There’s a lot of feel in this clubhouse.”

There are also quite a few faces to learn for the players, especially for newcomers.

“You run into people over breakfast, lunch, grabbing a coffee or something like that,” said the right-hander Alex Cobb, who signed a two-year, $20 million free-agent deal with the Giants this winter. “It’s not like speed dating where you hit every single room and chat for a while.”

As for the Giants’ veterans, they’ve not only adapted — they’ve thrived.

The right-hander Anthony DeSclafani produced a career year last summer, going 13-7 with a 3.17 E.R.A. over 31 starts. He picked up tips on his curveball from Martinez, received advice on his changeup from Bannister and soaked in “Bails relaying everything on the mental side of stuff.”

“They all had their unique experience to offer, and that’s really cool,” DeSclafani said.

Belt, a veteran entering his 12th season, said many of the players were skeptical of the new system at first. “But there’s literally somebody available to you at all times,” he said, “and you don’t realize how much that means until you have it.”

M.L.B. regulations allow for one manager and eight coaches in a dugout during games (when rosters expand in September, clubs are allowed nine coaches on the bench). Giants coaches who are not in the dugout are stationed in the clubhouse or behind the dugout in the indoor batting cage to assist where needed. Nakken, for example, makes sure potential pinch-hitters know which rival pitchers are warming up in the bullpen. One of her other duties is breaking down opponents’ ground-ball percentages so the Giants can deploy a five-man infield at the proper times.

Overall, Kapler likens Nakken to a traffic director who makes sure the communication among the coaches, and between coaches and players, is seamless.

“I don’t feel too much pressure, other than we want to be as prepared as possible every single day,” Nakken said of her trailblazing role as a woman. “So in that sense, it is a responsibility to come in and do the job really well.”

Before spring training in 2020, Kapler arranged a two-day retreat, during which the entire coaching staff visited points of interest around San Francisco, eating, talking — and bonding. This spring, the coaches attended a Bon Iver concert in Arizona.

As Correa said, it’s a group that knows how to use its ears. Communication “isn’t something that has always been known as a strength in baseball,” outfielder Mike Yastrzemski said, “But knowing what’s going on gives guys peace of mind to know what they need to do to go out and be successful.”