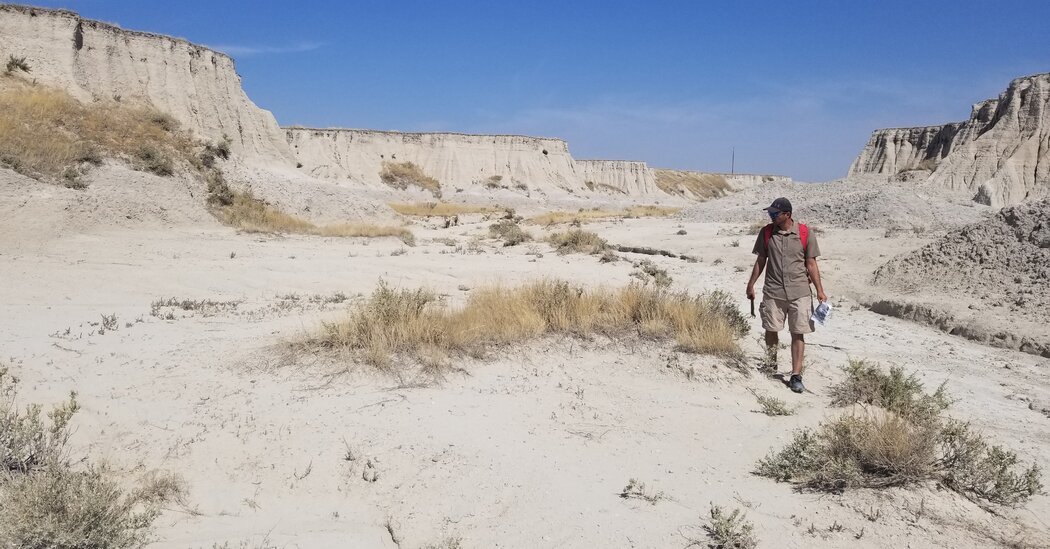 A small group of paleontologists recently discovered 10 species of ancient mammals previously unknown to science. But they had an enormous number of helpers at their dig site: thousands of tiny ants.

The ancient mammals, described in a study published in May by the Rochester Institute of Vertebrate Paleontology, include a pocket mouse that weighed less than a light bulb, a rat-sized relative of the mountain beaver and an ancestor of kangaroo rats.

The study sheds new light on the diversity of mammals that existed in North America around 33 million to 35 million years ago, when the climate was changing drastically. It also pays a rare homage to the insects who collected the fossils and makes a strong case for continued scientific collaboration between paleontologists and harvester ants, with which they have long had a love-hate relationship.

“They’re not fantastic when they’re biting you,” said Samantha Hopkins, a professor of earth sciences at the University of Oregon who was not involved in the study. “But I’ve got to appreciate them because they make my job a whole lot easier.”

Most species of harvester ant live in subterranean burrows that sit beneath mounds of dirt.

Harvester ants fortify these mounds by covering them with bits of rock and other tough materials. The ants have been known to travel over a hundred feet from their burrow and to dig six feet underground in pursuit of materials that help secure their mounds.

That material includes fossils, especially in the badlands of Wyoming, Nebraska and South Dakota, where fossils are abundant and can be found in loose soil. Harvester ants can carry materials 10 times to 50 times the weight of their body, although they do not weigh very much, so the heaviest fossil they can collect weighs less than the average pill.

Given these size constraints, harvester ant hills are hot spots for what scientists call microvertebrate fossils, which are animal fossils too small to see without a microscope. For over a century, scientists like Dr. Hopkins have scraped sediment off the sides of harvester ant hills in search of these fossils, making it easier to find large numbers of fossilized mammal teeth without spending hours in the field sifting through sand and dirt.

In 2015, an amateur fossil hunter in Sioux County, the northwest corner of Nebraska, noticed a staggering number of fossilized teeth and jaw bones sitting atop the ant hills on his property. He started sending samples to Clint Boyd, a senior paleontologist with the North Dakota Geological Survey. Over the years, the samples kept coming, and by 2020, Dr. Boyd had over 6,000 identifiable specimens.

With the help of Bill Korth, a research associate at the Rochester Museum & Science Center in New York, and a few other paleontologists, Dr. Boyd was able to identify dozens of species within the collection, as well as 10 new species.

These new species included Cedromus modicus, a relative of modern squirrels that only existed for a few million years, as well as Yoderimys massarae, the smallest member of a long-extinct group of rodents known as Eomyidae. The beaver relative, Costepeiromys attasorus, was named in honor of the harvester ant species who discovered it.

According to Dr. Boyd, naming the species after his insect collaborators was the least he could do. “They’re amazing little ants,” he said.

Based on the location and age of the rocks surrounding the ant hills, the researchers estimate that the fossils are from the late Eocene and early Oligocene epochs. During that time, Earth’s climate was cooling dramatically. Understanding the true extent of mammalian diversity during and after that time will help scientists better predict how mammals today might respond to a changing climate.

“It’s not enough to just look at the big things,” Dr. Hopkins said. “The small mammals might be the canaries in the coal mine.”

Fortunately, there are still boxes and boxes of fossils from ant hills that Dr. Boyd and his colleagues have yet to go through, with more turning up.

“We haven’t done enough even with how much we did,” Dr. Boyd said. “There’s still so much more to learn.”