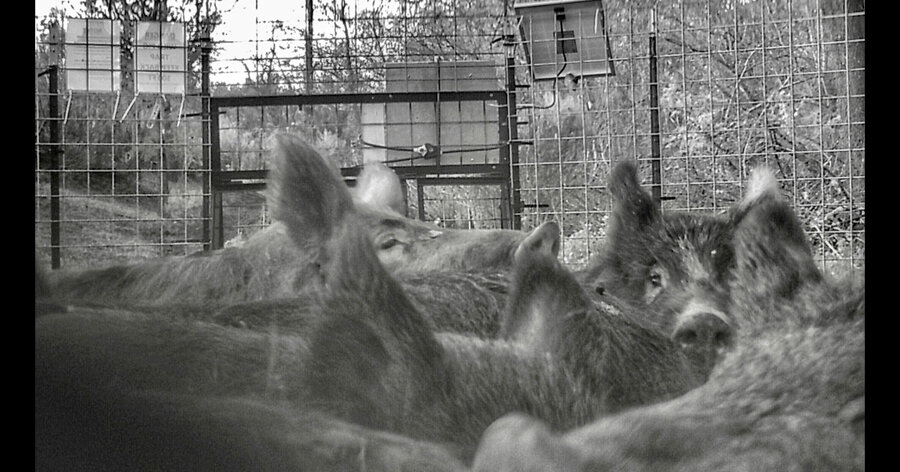 MORAGA, Calif. — The residents of the San Francisco Bay Area go to great lengths to accommodate the wealth of wildlife around them.

A sign at a playground in Moraga, a 35-minute drive from San Francisco, advises parents that rattlesnakes are “important members of the natural community” and to give the snakes “respect.”

Across the Bay in the San Francisco suburb of Burlingame, an animal shelter has rescued a family of skunks from a construction hole, a chameleon from power lines and nursed back to health 100 baby squirrels that tumbled out of their nests after their trees got trimmed.

With the exception of the occasional aggressive coyote, the animals that roam the hills and gullies of the Bay Area — turkeys, mountain lions, deer, bobcats, foxes and the rest of a veritable Noah’s Ark — find themselves on somewhat laissez-faire terms with the humans around them.

Not so for the rampaging feral pigs. They are tearing up lawns, ripping through golf course fairways, threatening the drinking water and disturbing the harvests at Napa vineyards. Many Californians want them dead.

“They are a pest to just about everybody and everything,” said Eric Sklar, member of the California Fish and Game Commission who helped write a bill introduced last week in the state legislature that would make it easier for hunters to kill feral pigs. “They’re very, very destructive.”

For decades, feral swine, armed with their knife-sharp tusks that protrude from snouty mouths, have torn up fields of corn, peanut and cotton in wide swaths of Texas and the South, causing what the U.S. Department of Agriculture estimates is $2.5 billion in damage every year.

A military fighter jet was wrecked several decades ago after a collision with two wild pigs on a runway in Florida. Weighing hundreds of pounds, they can be extremely dangerous and in rare cases have attacked and killed humans.

Now, in what one federal official called a “feral swine bomb,” the pigs are threatening states north and west. Some progress has been made: New York, New Jersey and Maine have eliminated their feral pig populations, according Michael Marlow, the acting program manager of the federal government’s National Feral Swine Damage Management Program. But at least 30 states still have wild pig populations, he said.

In California, 56 of the state’s 58 counties have wild pigs. The swine are inflicting a mounting economic toll in Lafayette, a suburb in the East Bay, where the pig invasion seems most acute. Before the pandemic the city shelled out $110,000 when pigs, rooting for grubs, churned soccer and baseball fields like a rototiller. The Park and Recreation Department installed fences around the fields and keeps a trapper on contract to capture and kill the pigs. Recently neighbors have been waking up to find their lawns churned into clumpy heaps of sod and dirt.

The head of the department, Jonathan “Ace” Katayanagi, said hikers have reported a few close calls with wild pigs, usually when off-leash dogs have chased after them. If confronted by angry hogs, people should stand on top of a car or shimmy up a tree, he recommends. “Pigs can’t climb,” he said.

Nearby, and more potentially serious, are the hundreds of pigs that have invaded the creek beds that feed into the San Leandro reservoir, which at certain times provides drinking water for Oakland, Piedmont, Alameda, Hayward and other East Bay cities.

Swine can harbor dozens of diseases including E. coli, leptospirosis, giardia, toxoplasmosis, and salmonella. Officials are concerned that the water supplies could become contaminated.

Andrea Pook, a spokeswoman for the East Bay Municipal Utility District, which manages the water system, said its processes “filter and disinfect every drop.”

But not all pathogens can be taken out in filtration, said Bert Mulchaey, the supervising biologist for the utility.

“We don’t allow people to have direct body contact with the reservoir,” Mr. Mulchaey said. “We definitely don’t want pigs to be wallowing around in it.”

The utility district spends $50,000 a year trapping pigs, which are killed with a firearm. But they keep coming, and in greater numbers. The district on average captures and kills 60 to 70 pigs a year. Last year it culled a record 226 pigs, including 47 over the past two weeks.

In addition to potentially contaminating the water, the pigs, which are not native to North America, are robbing native wildlife of acorns and other staples.

The U.S. Department of Agriculture estimates there are 6 million feral pigs in the United States. They are often hybrids of domestic pigs brought by European explorers five centuries ago and Eurasian or Russian wild boar imported in the 1900s for sport hunting.

“The combination made it a super invader,” said Mr. Marlow of the National Feral Swine Damage Management Program.

Fierce, prolific and highly adaptable, the hybrid swine, like their domesticated cousins, can run into the hundreds of pounds, including the 800-pound “Hogzilla” shot by a Georgia hunter in 2004.

The California legislation introduced on Jan. 19 by Bill Dodd, a state senator, would remove a requirement that hunters purchase a $25 “tag,” the legal right to hunt one pig.

“All year long you will be able to hunt as many pigs as you want,” said Mr. Sklar, the Fish and Game Commissioner. Some experts believe the swine, smart and somewhat nomadic, will move to areas where hunting is not allowed.

In Lafayette the job of culling the swine falls to Chris Davies, a licensed trapper with a vice-grip handshake and whose family has lived and hunted in the area since the 1880s. Mr. Davies’ father is a former hunting guide and tells the story of a fellow guide being gored to death by a feral pig in the 1970s.

“They’re super aggressive and pretty mean-natured,” Mr. Davies said of the pigs he traps. “I never met one that liked me.”

He has devised a corn-based bait, which he tosses into a sturdy metal-fenced corral equipped with cameras, a motion detector and a cellular connection. When the pigs enter the corral, almost always in the dead of night, Mr. Davies is alerted on his phone. He watches and closes the enclosure’s gate remotely once the whole group, or sounder, is inside.

Then he and his wife, Annie, carry their two sleeping children into the back of their pickup truck. They drive through the darkened suburban streets to the enclosure and shoot the pigs. “They go down like a sack of potatoes,” he said.

Among animal rights and conservation groups, Wayne Hsiung, the co-founder of Direct Action Everywhere, which describes itself as fiercely nonviolent, said his group is “very much opposed” to the culling of pigs, which he compared to killing dogs and cats.

But more typical is the nuanced view of Brendan Cummings, conservation director at the Center for Biological Diversity, an organization that focuses on the protection of wildlife and endangered species.

“We are talking about individual living animals that we should treat as ethically as possible,” Mr. Cummings said. But at the same time he is not opposed to culling or hunting pigs in places where they, as an invasive species, are damaging the environment.

The only times Mr. Cummings has gone hunting was for wild swine, partly because the pigs were killing the purple amole, an endangered purple flower that grows in central California.

“I would prefer a California where we had no wild pigs,” he said, adding that reintroducing jaguars into California could help reduce wild pig populations.

In the Bay Area, where residents are more likely to be showing off thousand-dollar mountain bikes than their latest hunting rifle, Mr. Davies, the pig trapper, realizes that some residents are put off by his profession.

“I guess there are a lot of people who think, ‘That guy is a psychopath, he likes killing pigs,’” Mr. Davies said. “I don’t enjoy killing them. But they are terrible animals.”

Mr. Davies distributes the dead hogs to local residents who carve them into pork chops and sausage.

Jenni Smith, the assistant pasture manager at the Moraga Horsemen’s Association, a local horse club, said she is grateful that the pigs are being trapped. Over the past year the swine tore up the horse paddock.

But Ms. Smith is not so sure about eating the culled pigs.