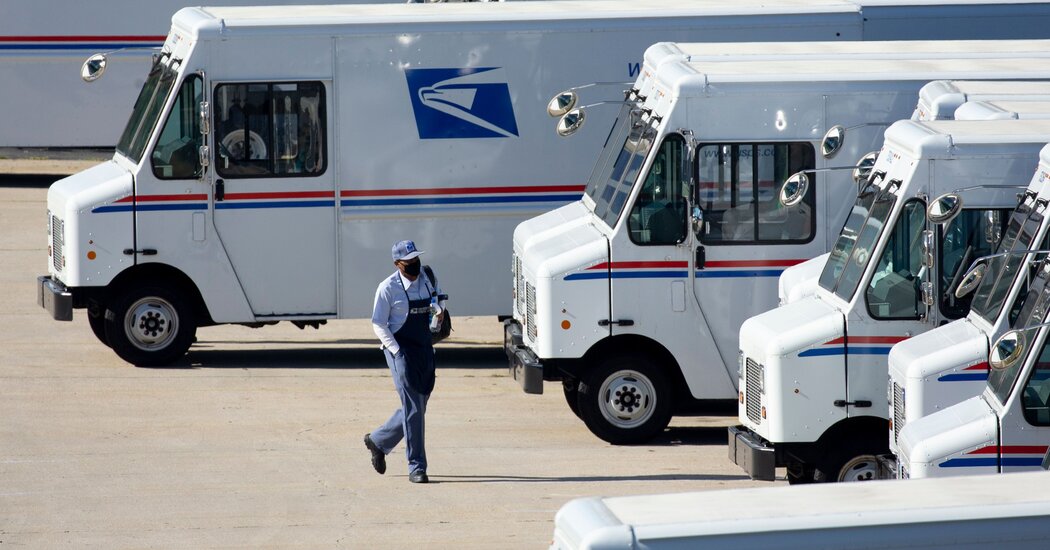 WASHINGTON — A senior House Democrat called on Wednesday for the resignation of Louis DeJoy, the postmaster general, saying he flouted President Biden’s plan to electrify the federal fleet by placing a multibillion-dollar order for mostly gasoline-powered vehicles.

Representative Gerald Connolly, the Virginia Democrat who leads the House subcommittee overseeing the United States Postal Service, called the move to invest in more gas-powered trucks “antediluvian” and a threat to the government’s ability to tackle climate change.

“The average age of the postal fleet is 30 years,” Mr. Connolly said. “They’re spewing pollution and they are guzzling gas. There is no question we have to replace the fleet, and it is a once-in-a-generation opportunity to take electric vehicle technology to the next level with the second- largest vehicle fleet in America.”

“If we miss this opportunity it sets back the whole thrust of the electric vehicle agenda,” he said.

The Postal Service owns more than 231,000 vehicles, one of the largest civilian fleets in the world. The distinctive red, white and blue trucks roam the country from congested cities to quiet rural towns. An all-electric fleet would not only deliver environmental benefits and help an emerging manufacturing sector, but serve as a powerful symbol of an administration that is determined to speed the transition away from fossil fuels.

Mr. Connolly called for an oversight hearing to examine the contract between the government and Oshkosh Defense, a Wisconsin-based company that manufacturers military vehicles. Other Democrats said they wanted the board that oversees the post office to remove Mr. DeJoy.

The order, for up to 165,000 trucks, would be the Postal Service’s first large-scale vehicle purchase in three decades, according to a statement from Oshkosh Defense.

Both the Environmental Protection Agency and the White House Council on Environmental Quality wrote to Mr. DeJoy on Wednesday to say that the Postal Service had made the wrong decision to buy gasoline powered trucks based on a flawed environmental analysis.

The letters also said the Postal Service had inappropriately committed more than $480 million to begin engineering and construction before the flawed environmental review was even completed.

“The Postal Service’s proposal as currently crafted represents a crucial lost opportunity to more rapidly reduce the carbon footprint of one of the largest government fleets in the world,” wrote Vicki Arroyo, the E.P.A. associate administrator for policy. The agency letter was first reported by The Washington Post.

Kim Frum, a spokeswoman for the Postal Service, said it was reviewing the letters from the environmental agencies.

Ms. Frum said the post office “fully satisfied” the National Environmental Policy Act, which requires agencies to consider the environmental consequences before taking major actions. She said the concerns raised by the White House and E.P.A. stemmed from “policy disagreements” rather than the analysis itself.

“While we can understand why some who are not responsible for the financial sustainability of the Postal Service might prefer that we acquire more electric vehicles, the law requires us to be self-sufficient,” Ms. Frum wrote in a statement. “For that reason, given our current financial condition, the total cost of ownership of our delivery vehicle fleet must be a part of our analysis.”

Ms. Frum said the Postal Service wanted to accelerate the pace of electrifying its fleet, contingent on funding. She did not respond to the congressman’s call for Mr. DeJoy’s resignation.

President Biden has called for federal agencies to phase out the purchase of gasoline-powered vehicles and by 2035 to buy only zero-emissions cars and trucks. But last February, the Postal Service said it could not afford an all-electric fleet and that 10 percent of new trucks would be electric while 90 percent would be gasoline-powered. The E.P.A. estimated the climate damages that would be caused by the new fleet at $900 million.

“This is directly counter to the goals both Congress and the president has set to have an emissions-free federal fleet,” Mr. Connolly said. He called the contract an “enormous example” of why he feels Mr. DeJoy should step down.

“I would love for him to resign and if he won’t resign, I want the board of governors to fire him,” Mr. Connolly said.

The Postal Service is an independent agency and not bound by the administration’s new climate rules.

On Wednesday a White House official said the administration still intended to push the Postal Service to electrify its fleet.

The service is currently about $206.4 billion dollars in debt, and the House is poised to relieve that burden with a sweeping postal reform bill expected to come to the floor for a vote in the coming weeks.

Mr. Connolly said he would support an amendment nullifying the truck contract or compelling the post office to purchase electric vehicles. He also noted, however, that the postal reform legislation took 12 years to negotiate and is supported now by a “fragile” bipartisan coalition that he is not willing to upset.

“I don’t want a Pyrrhic victory on this issue where it brings down the whole bill,” he said.

Mr. Connolly said he and other Democrats would also look for other routes including bringing stand-alone legislation on the issue or using the appropriations process to move the Postal Service.

The Build Back Better Act, Mr. Biden’s centerpiece legislative agenda, includes about $6 billion to help the post office pay for electric vehicles and charging stations. That bill is stalled in Congress.

Mr. DeJoy, a Republican donor and former business executive who was appointed by former President Donald J. Trump, has been mired in controversy over cost-cutting measures that were faulted for slowing mail delivery during the 2020 election, when many voters planned to vote by mail, as well as delays in delivery of medicine and bills.

Mr. DeJoy has proposed a 10-year plan that would raise some prices and slow service in an effort to recoup billions in projected losses.

The postmaster general can be removed only by the Postal Service’s nine-member board of governors, who are presidential appointees. Congressional Democrats and liberal groups have sought to replace Mr. DeJoy since he assumed office in June 2020, and they had urged Mr. Biden to install more Democrats on the board who could oust him.

In November, Mr. Biden nominated two new members, Dan Tangherlini, a Democrat and former head of the General Services Administration, and Derek Kan, a Republican and former deputy director of the Office of Management and Budget. If confirmed by the Senate, they would replace two departing members whose terms are expiring and who have been allies of Mr. DeJoy. By law, no more than five members can belong to the same party.