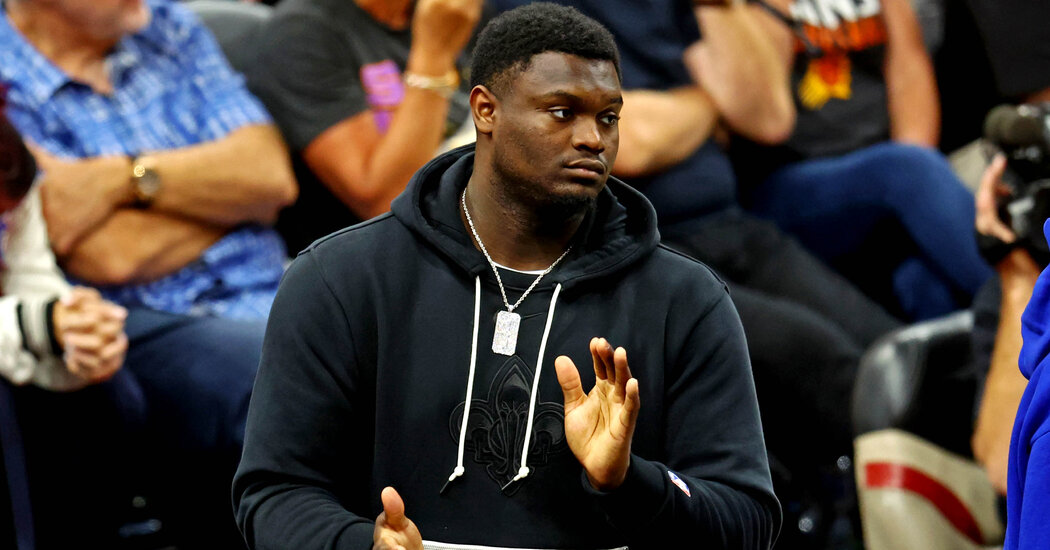 Last month, Zion Williamson threw the ball off the backboard, caught it in the air, crossed it between his legs and threw down a dunk before descending back to earth. This month, he drove to the paint, leaped up from the restricted circle and launched into a 360-degree slam. These were the Cirque du Soleil-style highlights that Pelicans fans had hoped to see Williamson perform nightly after New Orleans drafted him with the No. 1 pick in the 2019 N.B.A. draft.

The only problem? Neither of those highlight-reel plays took place during a game. The first was posted to Williamson’s Instagram story from an empty gym, and the second came during pregame warm-ups before the Pelicans defeated the Los Angeles Clippers in the play-in tournament.

It has been almost a year since Williamson last played in a live game, the result of foot surgery that has been painfully slow to heal. Without him, the Pelicans have made a surprising playoff run and are giving the top-seeded Phoenix Suns all they can handle in their first-round series. The Pelicans’ performance has left basketball fans everywhere — and especially in New Orleans — wondering how good this young team could be if Williamson were there.

The Pelicans tied the series, 2-2, with an energetic 118-103 victory at home over Phoenix on Sunday. The Suns were up by 2 at halftime, but New Orleans outscored them by 12 in the third quarter and led by as many as 18 en route to the win. The home crowd was rocking — the kind of atmosphere that could become routine as the team continues to find itself, with and without Williamson.

As a high schooler, Williamson was hyped like no player since LeBron James. His high-flying dunks made him a social media celebrity and a sought-after recruit, but some scouts wondered whether a 6-foot-6, 280-pound forward could thrive in college basketball or the N.B.A. In his single season at Duke, Williamson left no doubts about his abilities. In his collegiate debut against Kentucky, he scored 28 points in 23 minutes on 11-for-13 shooting and produced the first of many mind-boggling highlights when he blocked a 7-footer’s shot with both hands before leading a fast break and finding RJ Barrett for a bucket in transition.

During that Duke season, Williamson’s dunks continued to peel the paint off rims and to air on repeat on “SportsCenter.” But he proved to be more than a human highlight reel. He showed an uncanny knack for seeing passing lanes before they appeared on offense — and for cutting them off on defense, where he averaged 2.1 steals per game. Despite his size, the Blue Devils often played Williamson at the 5, and he defended the rim admirably, averaging 1.8 blocks per game.

“This kid is — he’s just one of a kind,” Duke Coach Mike Krzyzewski told reporters in March 2019. “He’s certainly a special basketball player, but as a youngster, he has a maturity. It’s uncommon. It really is uncommon. How humble he is. How fresh, exciting. He’s exquisite. He’s just the best.”

In one of the most memorable moments of Williamson’s college career, on the road against No. 3 Virginia, he pulled off a seemingly impossible block against a future top-five pick, De’Andre Hunter. After initially defending guard Kyle Guy outside the 3-point line, Williamson chased a pass to a wide-open Hunter in the opposite corner. Covering 25 feet in two seconds, Williamson launched as if from Cape Canaveral and swatted Hunter’s shot into the fourth row of the stands.

After tearing his meniscus in the 2019 N.B.A. preseason, Williamson appeared in only 24 games during his first season in New Orleans. Nonetheless, he was named to the N.B.A. All-Rookie first team. The next season, he averaged 27 points, 7.2 rebounds and 3.7 assists per game on the way to his first All-Star selection. He proved to be one of the most efficient scorers in the N.B.A., at one point shooting better than 50 percent from the floor in 25 consecutive games. His average of 20.3 points in the paint per game was more than any player since Shaquille O’Neal. It’s Williamson’s ability to score easily in halfcourt sets that New Orleans has missed the most this year.

With Williamson sidelined again this season, the Pelicans looked listless to start the year. They won just one game in their first 13 and spent most of the first three months in the Western Conference cellar. But Willie Green, their first-year head coach, managed not to let the team linger on questions of when Williamson would return. Instead, he focused on developing other young stars: Trey Murphy, a first-round pick; Herbert Jones, a second-round pick; and the undrafted point guard Jose Alvarado have emerged as surprisingly mature and effective rookies. As the trade deadline approached, the Pelicans had become a pesky and physical defensive team and had climbed to 10th place in the West.

Trading with the Portland Trail Blazers for guard CJ McCollum took some of the offensive pressure off their leading scorer, Brandon Ingram, and gave the Pelicans a much-needed veteran leader in the locker room. Ingram and McCollum developed a quick chemistry despite playing in just 15 games together during the regular season. When McCollum and Ingram shared the floor with center Jonas Valanciunas, the Pelicans posted an astounding 119.2 points per 100 possessions. The strengths that the team has developed — from rebounding to transition offense to points in the paint — perfectly suit Williamson’s skills. And when New Orleans’s offense stagnates in the halfcourt, it’s hard not to imagine how much more pressure it could put on defenses with a 60 percent shooter in its arsenal.

In prior matchups against a healthy Williamson, the Suns often assigned the 6-foot-11 center Deandre Ayton to guard him. When Williamson pulled Ayton out to the perimeter, driving lanes that had once resembled the freeway on a Friday afternoon suddenly opened. There’s no doubt that a healthy Williamson would have an impact on this series. With the Suns’ starting shooting guard, Devin Booker, sidelined because of a hamstring injury, the return of Williamson could transform the series. And even if he was not able to put New Orleans over the top of the reigning N.B.A. champions, his presence would be an opportunity for the Pelicans’ core players to get experience playing together in high-stakes situations.

According to ESPN, Williamson and the franchise have a “difference of opinion” about whether he’s healthy enough to play. But the team has not officially ruled him out. Whatever tension exists between Williamson and the Pelicans is likely to spill over into the off-season, with Williamson eligible for a rookie max extension after having played just 85 games in three seasons.

“Some things need to stay private, but I will say this: What Z is going through is extremely difficult,” Green told reporters in February. “As a player and person, I’ve went through injuries. No excuses made on my part, but it’s difficult. You’re weighing a lot at those moments. You’re weighing when you’re going to continue to play. A lot goes through your head. For us here, for me, it’s having compassion and having an understanding of what he has to go through to get healthy.”

Until Williamson’s return, all that’s left for his fans to do is rewatch old highlights, overanalyze new ones and wonder what could be.