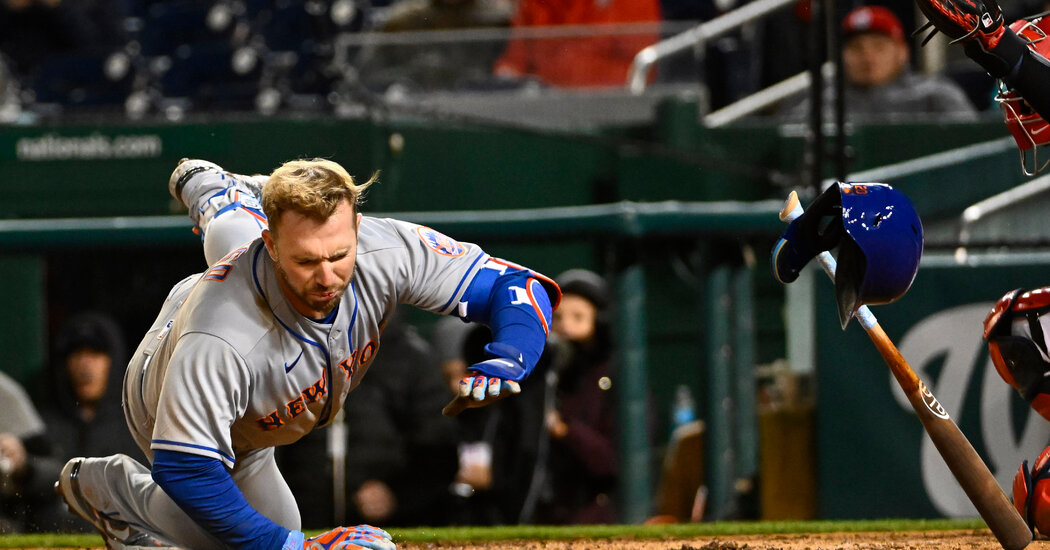 With Mets batters being hit by pitches at a high rate this season, the team is running out of patience and looking for answers. At least one Mets player thinks there is a culprit: the baseballs Major League Baseball is using this season.

The reason for the Mets’ frustration is clear: First baseman Pete Alonso has been hit in the head twice — the second incident, which happened Tuesday, resulted in a broken helmet — and shortstop Francisco Lindor has also been hit in the head. Overall, the Mets have been plunked 18 times in 19 games, which is seven more than any other team.

While Alonso expects to start for the Mets in an afternoon game Wednesday and none of the incidents have led to serious injury, emotions boiled over Tuesday in the team’s 3-0 win over the St. Louis Cardinals. The Mets’ Dominic Smith was hit by reliever Nick Wittgren in the sixth inning; Alonso took a changeup recorded at 83.1 miles per hour from Kodi Whitley to his helmet in the eighth, leading to both benches clearing; and Starling Marte was hit by Aaron Brooks with a 92.7 m.p.h. sinker in the ninth. Marte’s hit by pitch came with the bases loaded, driving in a run.

Chris Bassitt, an All-Star pitcher who started the game for the Mets (and hit one batter), said he blamed the baseballs, which are “all different.”

“It’s extremely annoying to see your teammates constantly get hit, and if you get hit by certain pitches it is what it is, but to get hit in the head the amount that we’re getting hit is unbelievable,” Bassitt, who was hit by a line drive in the face last season, told reporters. “I had some close calls tonight, and I’ve been hit in the face, and I don’t want to do that to anybody ever, but M.L.B. has a very big problem with the baseballs.”

“They’re bad,” he added. “Everyone in the league knows it. Every pitcher knows it. They’re bad.”

Part of the issue could be a struggle for some pitchers to grip the baseball in the wake of M.L.B.’s crackdown on the use of foreign substances. Last season, some pitchers, including Gerrit Cole of the Yankees, were accused of using products like Spider Tack to improve grip and increase spin rate, leading M.L.B. to conduct on-field inspections in an attempt to eliminate the substances from the game.

“You want to talk about Spider Tack and all this other stuff, yeah, get that out of the game,” Mets catcher James McCann told reporters after Tuesday’s game. “I agree with that. But give them an on-deck circle just like the hitters have. Let them have a grip on the baseball.”

The idea that the baseballs could be different, however, is not without merit. An investigation for Business Insider by Bradford William Davis and the physicist Meredith Wills identified two distinctly different baseballs that were used in games in 2021.

Regardless, Mets Manager Buck Showalter believes something is amiss in how often his players are hit.

“It’s one thing to get hit in the toe or knee, but we’re getting a lot of balls in the head and the neck, and it’s just not good,” Showalter told reporters. “Not good. You care about your players, and without getting into right and wrong and what have you, you reach a point where it’s about safety of your players.”

“We’re lucky,” Showalter said of Alonso. “You’re talking about a pitch that broke his helmet. It’s not good. I’m not happy.”