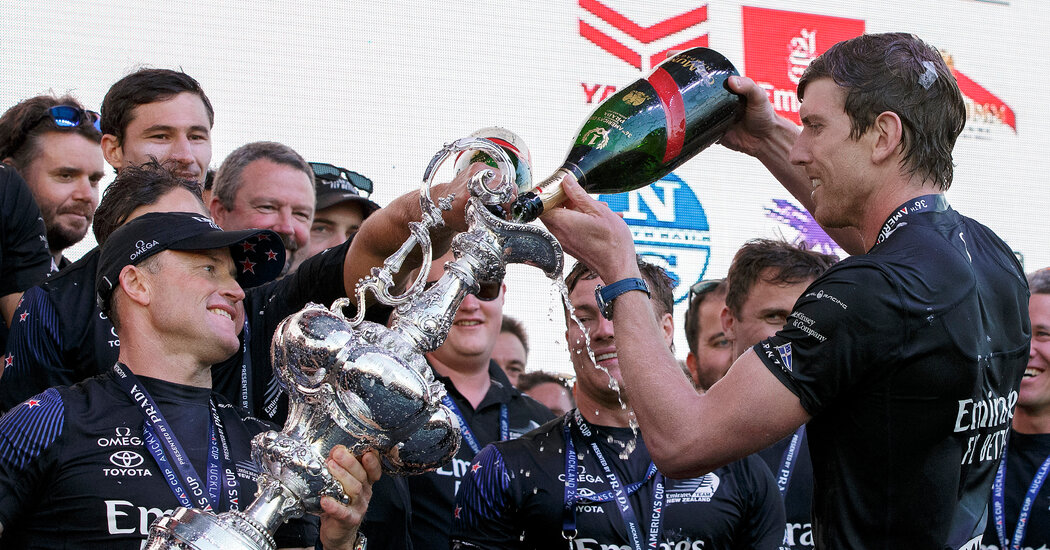 For days, the Italian racing boat pursued its rival from New Zealand in the America’s Cup. Sometimes, the Italians looked for an advantage by cutting in as close as safety allowed. Other times, they veered as far away as the course allowed, seeking an edge by giving it rival a wide berth.

Both teams had millions of dollars at their disposal. Both teams had expert crews. But, as in most sailing races, the outcome eventually came down to one simple fact: New Zealand’s boat was faster.

“At times,” said Jimmy Spithill, the co-helmsman for the Italians, “it felt we were taking a knife to a gunfight.”

Team New Zealand retained the America’s Cup on Wednesday, speeding away from its Italian challenger Luna Rossa to claim sailing’s biggest prize in its home waters off Auckland. The victory was the second in a row for a syndicate representing the Royal New Zealand Yacht Squadron, and the fourth win in the finals since 1995 for a team from New Zealand.

It also marked the second victory in a row for Team New Zealand’s 30-year-old helmsman, Peter Burling, who added another title to a résumé that already includes nine world championships and Olympic gold and silver medals.

“It means the world to us and the team,” Burling told Radio New Zealand, the national public broadcaster.

New Zealand’s clinching race victory came two days after it seized the momentum in a taut competition by exploiting its speed advantage to pick up back-to-back wins on Monday. It won again on Tuesday and Wednesday, when it became the first to reach seven wins.

The clinching race on Wednesday began evenly, with the two boats battling closely. But slightly better tacking and slightly better speed gave New Zealand a seven-second lead at the end of the first leg. From then on, New Zealand slowly and methodically extended its advantage. Every Luna Rossa effort to close the gap was in vain.

The final margin was 46 seconds. The final score in the competition was 7-3.

The Kiwis’ victory ended one of the most unusual editions of the America’s Cup, which was first contested in 1851. This year’s races took place without their usual huge crowds of visiting spectators, many of whom had been kept away by strict coronavirus restrictions that had effectively closed New Zealand’s borders to noncitizens. The racing schedule also had to be modified several times to accommodate stringent — and changing — lockdown rules that at times forced delays in the competition.

The entrants were unlike any that preceded them, too. This year’s America’s Cup was contested by a new class of boat: sleek, 75-foot foiling monohulls which — when raised out of the water and riding above the waves on their spider-like foils — were capable of speeds of as much as 60 miles an hour. The boats did not so much slice through the water as glide above it. And none did that better than Team New Zealand.

But there were subtle distinctions that only the racing could reveal. The Kiwis had emphasized speed in their racing boat’s design, with a flatter hull and smaller foils that minimized drag as its cut through the water. Luna Rossa’s larger foils offered advantages in stability and maneuverability, and the Italians used weeks of challenger races to hone the tactics they put to use several times in the finals. But speed proved to be the difference, and Team New Zealand simply had more of it.

“Deservedly champions,” Spithill said of his opponents after the series ended.

Still, he admitted, he had a few regrets.

“I believe we left some wins on the table,” he told reporters. “But that’s sport, and I truly believe the better team won.”

Over the first six races of the finals, the mantra had been a simple one: Win the start, win the race. In each of those races, the team that was first across the starting line was also the first to reach the finish line. The largely drama-free racing had showcased the skills of the teams and the precision of their boats, but it also led to an unwelcome accusation: that the finals were boring.

That changed on Monday. Taking advantage of shifting winds and unleashing the speed that many suspected it had not yet fully shown, Team New Zealand surged from behind to win consecutive races, breaking the tie and giving the team a 5-3 lead. The Kiwis added a fourth straight win on Tuesday, and suddenly the prize for years of planning and millions of dollars in investment felt close enough to touch.

“This team’s been in this position before,” Burling said after moving within one win of the seven New Zealand needed to claim the trophy. “We just want to keep improving, keep moving forward and we’re really excited about another race.”

Light winds had forced the teams to abandon the second race on Tuesday, when New Zealand seemed poised to seal its triumph, but that only delayed what many by then saw as the inevitable. Even as Luna Rossa lamented another “painful” defeat on Tuesday, its co-helmsman Francesco Bruni found no fault in his team’s performances.

Team New Zealand, he seemed to be saying, had simply been faster.

“I think we did a fantastic race honestly,” Bruni said. “No regrets.”