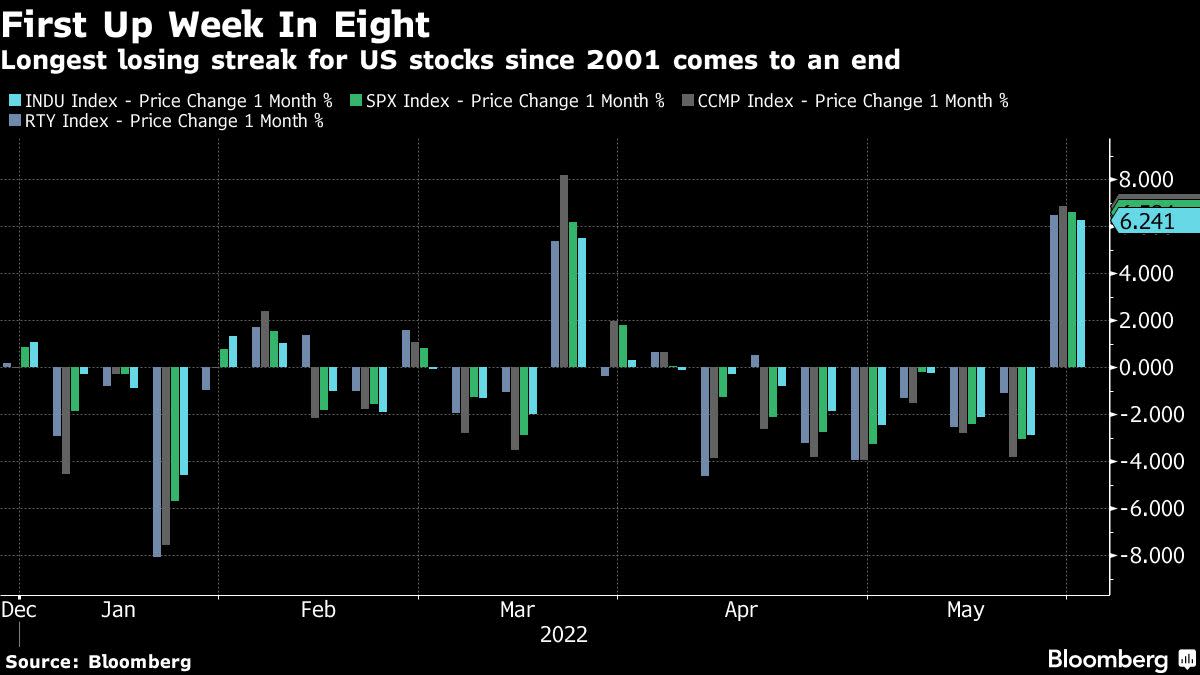 (Bloomberg) — Stocks and US futures trimmed their advance and European bonds tumbled after hotter-than-expected German inflation numbers added to pressure for action from central bank policymakers to tame rising prices.

Nasdaq 100 contracts and S&P 500 futures rose in a sign the bounce in US stocks may have further to run after Wall Street’s best week since November 2020. The S&P 500 wiped out its May losses and snapped a string of seven weekly declines as institutional investors rebalanced portfolios into the end of the month.

The dollar slipped for a third day versus major peers as havens lost their appeal amid the slightly improved mood. Cash Treasuries aren’t trading because of the Memorial Day holiday.

Traders are pondering whether the bottom of the selloff is near as investors have been buying the dip after one of the worst starts to the year for equities. However, a wall of worries remains from hawkish central banks underscoring fears of a recession, escalating food inflation from the war in Ukraine and China’s lockdowns stunting economic activity.

“We are in the middle of a bear-market rally,” Mahjabeen Zaman, Citigroup Australia head of investment specialists, said on Bloomberg Television. “I think the market is going to be trading range-bound trying to figure out how soon is that recession coming or how quickly is inflation going down.” She added that Treasury yields are set to peak this year.

Meanwhile, German inflation hit another all-time high, adding urgency to the European Central Bank’s exit from crisis-era stimulus after numbers from Spain also topped economists’ estimates. The reports came 10 days before a crucial ECB meeting where officials are set to announce the conclusion of large-scale asset purchases and confirm plans to raise interest rates in July for the first time in more than a decade.

Traders will be looking to the US payroll numbers later this week to gauge the Federal Reserve’s tightening path as it strives to rein in inflation. Meanwhile, the Fed is set to start shrinking its $8.9 trillion balance sheet starting Wednesday.

Federal Reserve Governor Christopher Waller said he wants to keep raising interest rates in half-percentage point steps until inflation is easing back toward the US central bank’s goal. “I support tightening policy by another 50 basis points for several meetings,” he said in remarks prepared for delivery on Monday in Frankfurt. “In particular, I am not taking 50 basis-point hikes off the table until I see inflation coming down closer to our 2% target.”

Oil climbed to a two-month high in response to the easing of Chinese lockdowns and as the European Union worked on a plan to ban imports of Russian crude.

In Asia, Japanese and Hong Kong equities led gains. China’s yuan outperformed after the nation reported fewer Covid-19 cases in Beijing and Shanghai. China’s reopening moves prompted a gauge of emerging-market stocks to rise to the highest since May 5.

Here are some key events to watch this week: