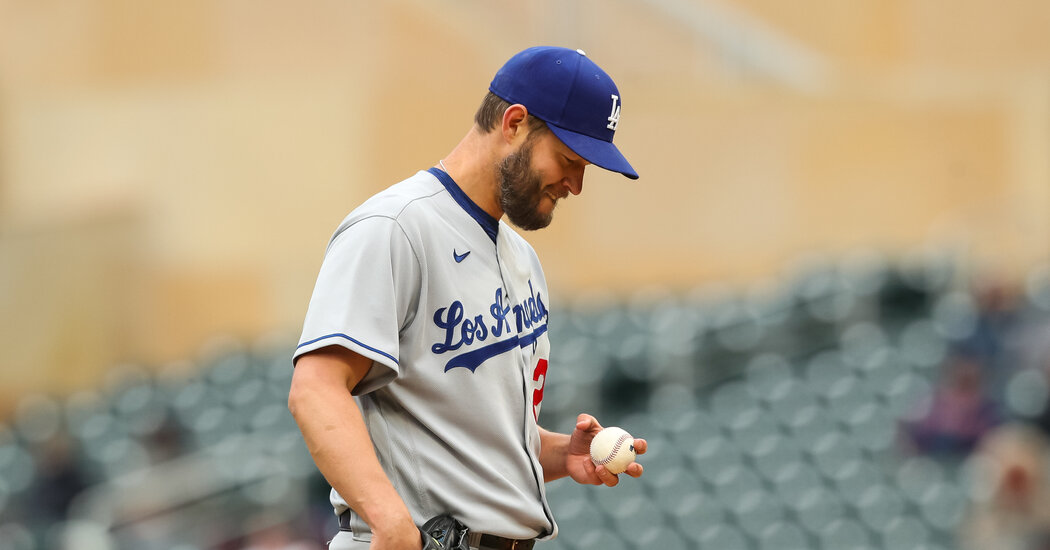 Clayton Kershaw has won three National League Cy Young Awards, one N.L. Most Valuable Player Award and a World Series. He has thrown a no-hitter and compiled a near-certain Hall of Fame résumé.

But he has never thrown a perfect game, and his best chance at accomplishing that exceptionally rare feat may have disappeared thanks to circumstances including a manager’s decision, his age and recent injury history and, possibly even, the owner-imposed lockout that threw Major League Baseball into uncertainty this winter.

Kershaw, 34, was absolutely dominant in his first start of the season, striking out 13 Minnesota Twins over seven innings and 80 pitches on a cold, 38-degree day at Target Field in Minneapolis.

But his afternoon ended there. Manager Dave Roberts summoned the left-handed reliever Alex Vesia to start the eighth inning and any thoughts of a combined perfect game — it would have been the first of its kind — quickly ended when, with one out, Twins catcher Gary Sánchez rapped Vesia’s fifth pitch into right field for a single.

There have been only 23 perfect games, and none since Seattle’s Félix Hernández did it against Tampa Bay on Aug. 15, 2012. Everything lined up for Kershaw in Minnesota not just to notch one more historical personal moment, but to end the current drought of perfect games, the longest in M.L.B. since the span between 1968, when Oakland’s Catfish Hunter did it against the Twins, and 1981, when Cleveland’s Len Barker throttled Toronto.

But those were accomplished before the era of pitch counts and conservation tactics, and Kershaw appeared to be a willing victim to both in surrendering his chance at perfection. Calling it the “right decision,” Kershaw told reporters to “blame it on the lockout, blame it on my not picking up a ball for three months” during the off-season.

His age and the fact that Kershaw made only 22 starts last year and missed the entire postseason because of left forearm and elbow discomfort — and, the fact that he’s battled back issues in his past — undoubtedly contributed to the blame as well. The Dodgers are adept at managing their players’ health and workload and, under the direction of Andrew Friedman, the team’s president of baseball operations, and Roberts, prioritize moves aimed at the long-term goal of winning the World Series over the short-term gratification of a single moment or individual player.

To that end, Roberts has far more experience than he would presumably like in yanking history away from pitchers. This was the fourth time in his seven-year tenure as the Dodgers’ manager that he has pulled a pitcher from a perfect game or a no-hitter, including the only other time since at least 1901 that a pitcher has been pulled after seven perfect innings, according to Stats Perform.

“Every decision I make is for the best interest of the player, their health and the ball club, because there’s a lot of people that are cheering for the Dodgers, not only just for today and Clayton to throw a no-hitter, but for the Dodgers to win the World Series,” Roberts told reporters. “For us to do that, we need him healthy.”

The previous times Roberts had made such a decision:

But Kershaw, simply because of who he is and what he has done, ranks on a different level. Had he completed a perfect game, it would have added to his legend and presented M.L.B. with an all-time moment.

His slider was vintage, evidenced by the Twins’ 17 swing-and-misses at the pitch on a cold afternoon that surely had historians reminiscing about the Dodgers’ 1965 World Series win over Minnesota. That title was capped by the Hall of Famer Sandy Koufax winning Game 7 in old Metropolitan Stadium in Bloomington, Minn., on short rest. The thread connecting the two ace left-handers pulls tight through Dodgers history: Kershaw and Koufax since have developed a strong friendship and mutual admiration over the years.

The decision to pull the plug on the potentially huge moment for Kershaw was met with some fierce criticism online. One notable detractor was Reggie Jackson, the Hall of Fame outfielder. Jackson, who played right field for the Athletics during Hunter’s perfect game, expressed his shock at Roberts’s decision on Twitter.

But Roberts, who has weighed such decisions in the past, had a recent reminder of importance of calibrating pitching workloads. In October, the midseason acquisition Max Scherzer was unable to make a start in the National League Championship Series against Atlanta after he started one game and closed another against San Francisco in a division series after starting the N.L. wild-card game against St. Louis.

Always, the Dodgers plan their calendar around October. And what happened with Kershaw in Minnesota on a Wednesday afternoon in April was only the most recent example.