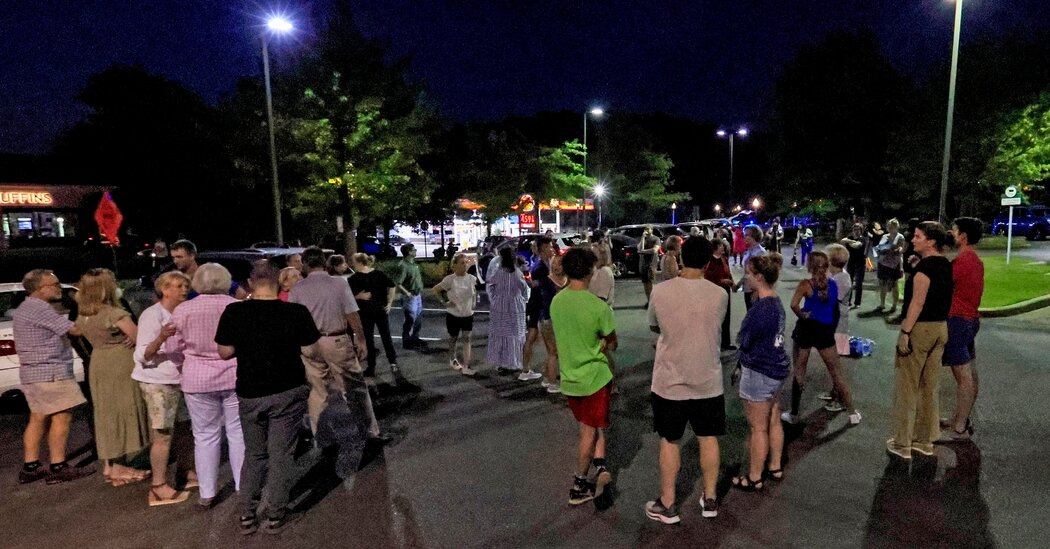 What started out as a relaxing potluck dinner at an Episcopal church in Alabama on Thursday evening took a sudden and deadly turn when a man pulled out a handgun and opened fire, killing three people, the authorities said.

The gunfire inside the Saint Stephen’s Episcopal Church in Vestavia Hills, Ala., ended when a fifth person subdued the gunman and held him down until the authorities arrived, Capt. Shane Ware, of the Vestavia Hills Police Department, said at a news conference on Friday.

That person, whom the authorities did not identify, “was extremely critical in saving lives,” Captain Ware said. “The person that subdued him is a hero.”

Captain Ware identified two of the victims on Friday: Walter Rainey, 84, of Irondale, Ala., who was pronounced dead at the scene; and Sarah Yeager, 75, of Pelham, Ala., who died at a nearby hospital. A third victim who was identified only as an 84-year-old woman from Hoover, Ala., died on Friday after she was treated for her injuries at a hospital, Captain Ware said.

Captain Ware identified the gunman as a 71-year-old man whom he described as an “occasional attendee” of the church in Vestavia Hills, a city of around 34,000 people about six miles south of Birmingham. The man’s name was not released on Friday. Captain Ware said the police were seeking warrants for capital murder from the Jefferson County District Attorney’s Office.

The authorities were summoned to the church at 6:22 p.m. A motive for the shooting was not immediately clear. “The suspect acted alone,” Captain Ware said, adding that there was “no threat to the community.”

The gunfire broke out suddenly at a “small group meeting” that the church billed as a “Boomers Potluck Dinner,” Captain Ware said. “There will be no program, simply eat and have time for fellowship,” an advertisement for the event said. It was not clear how many attended the gathering on Thursday.

Mayor Ashley Curry of Vestavia Hills described the area as a “close knit, resilient, loving community” that he said had been devastated by the shooting.

“Our prayers go out to the victims and the families of this senseless act,” he said at the news conference.

On Thursday night, Gov. Kay Ivey of Alabama called the shooting “a tragic loss of life.”

“This should never happen — in a church, in a store, in the city or anywhere,” she said.

The Rev. John Burruss, who serves as the church’s rector, said in a video posted online that he was in Greece on Thursday on a pilgrimage but was working to quickly get home.

“I’m deeply moved by the radical support of love from many people reaching out from all over the country,” he said.

He added that in the coming days, the church would share ways to “pray and to gather.”

“That is what we do as people of faith,” he said. “We come together in midst of life and death.”

The shooting happened amid a nationwide explosion in gun violence, including two gun massacres in May: one at an elementary school in Uvalde, Texas, that left 19 children and two teachers dead; and a racist attack at a Buffalo supermarket in which a white gunman killed 10 Black people.

The back-to-back mass shootings pushed the issue of gun violence to the forefront in Washington, where Congress is trying to advance a bipartisan deal on a narrow set of gun safety measures, including enhanced background checks to give the authorities time to check the juvenile and mental health records of any prospective gun buyer under the age of 21.

Also in May, a 68-year-old man from Las Vegas opened fire inside a church with a Taiwanese congregation in Southern California, killing one person and wounding five others in what the Orange County sheriff described as a “politically motivated hate incident.”

The Rev. Kelley Hudlow of the Episcopal Diocese of Alabama said by phone on Thursday night that she had driven to the church in Vestavia Hills as soon as she heard about the shooting. When she arrived, Ms. Hudlow said she saw churchgoers and other members of the community praying together while some witnesses spoke to the authorities.

“Everybody is in a fair amount of shock,” she said. “It’s not what you think is going to happen here.”