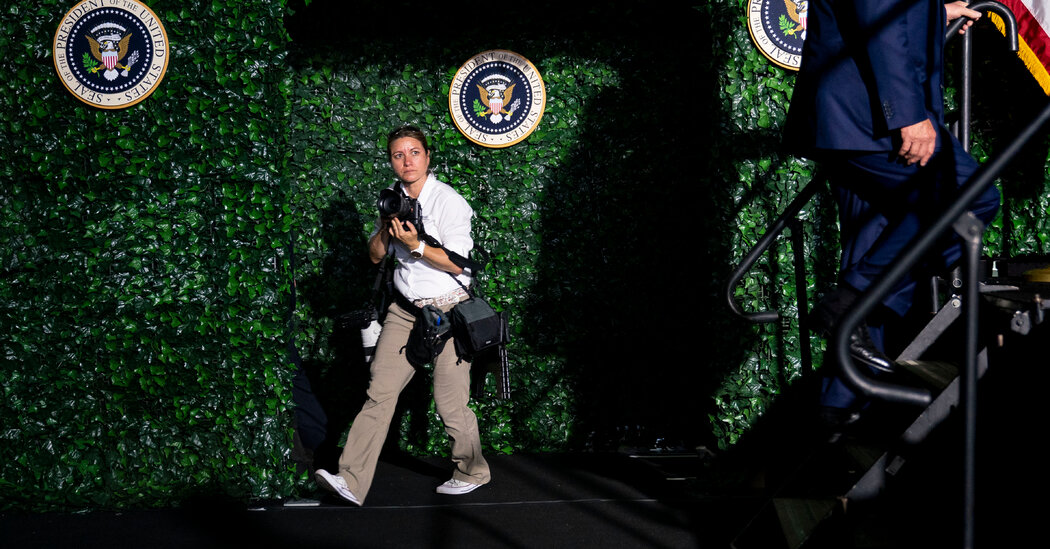 WASHINGTON — As President Donald J. Trump’s tenure came to an end, the chief White House photographer, who had traveled the world with him and spent countless hours inside the White House snapping pictures, notified Mr. Trump’s aides that she intended to publish a book collecting some of her most memorable images.

This was hardly a radical idea: Official photographers from every White House since President Ronald Reagan’s have published their own books. Barack Obama and George W. Bush were so supportive that they wrote forewords for them.

But like so much else involving Mr. Trump, the plan by his chief photographer, Shealah Craighead, did not follow this bipartisan norm.

First, aides to Mr. Trump asked her for a cut of her book advance payment, in exchange for his writing a foreword and helping promote the book, according to former associates of Mr. Trump.

Then Mr. Trump’s team asked Ms. Craighead to hold off on her book project to allow the former president to take Ms. Craighead’s photos and those of other White House staff photographers and publish his own book, which is now selling for as much as $230 a copy.

That the profits from Ms. Craighead’s labor are now going into Mr. Trump’s pocket has left several of Mr. Trump’s former aides upset — but not exactly surprised.

“Shea’s a very talented photographer and this was really all of her hard work,” said Stephanie Grisham, who served as the White House press secretary for Mr. Trump and wrote her own book, referring to Ms. Craighead by her nickname. “I just keep thinking: What a shame that he is actually now profiting off of it. But then again, this is the guy who is hawking caps and all kinds of stuff right now to raise money for himself.”

Eric Draper, who was the chief White House photographer during Mr. Bush’s tenure, said the move was disrespectful to Ms. Craighead.

“It’s a slap in the face,” Mr. Draper said, adding that he had spoken with Ms. Craighead last year about her plan to do her own book. “I would be disappointed if I were in her shoes.”

Taylor Budowich, a spokesman for Mr. Trump, did not dispute that an aide had discussed the possibility of Mr. Trump writing a foreword for Ms. Craighead’s book and perhaps taking a cut of her advance. Her tentative deal with a publisher involved an advance in the hundreds of thousands of dollars, one industry executive said.

Instead, Mr. Budowich said, Mr. Trump decided to first do his own book, a separate deal that came with a much bigger, multimillion-dollar advance.

“President Trump has always had an eye for beautiful and engaging curation, which came alive through the pages of his book,” he said in a statement.

Ms. Craighead, in an interview, said she did not want to publicly comment on matters involving a former client. But she did confirm that she has decided, at least for now, to kill her own book project.

“I stay apolitical as possible, as I am a neutral historical documentarian,” she said. “By staying neutral I am able to remain a keen observer.”

The 317-page book Mr. Trump published in December, titled “Our Journey Together,” includes no photo credits. It does not mention any of the photographers who took the images until the last page, where he briefly offered a “grateful acknowledgment” to “all the phenomenal White House photographers,” listing them by name, including Ms. Craighead, whose pictures make up much of the book.

There is no legal prohibition on Mr. Trump assembling and publishing photographs that a White House staff member took during his tenure; under federal law, those photographs are considered in the public domain and not subject to copyright. There is a public Flickr account, now managed by the National Archives, that has 14,995 photos from the Trump White House, a third of them listing Ms. Craighead as the photographer.

But in dealing with Ms. Craighead, Mr. Trump appears to have become the first former president to try to make money from a book planned by a former White House photographer, said John Bredar, a documentary filmmaker and author who has studied the history of the White House photographers. (Profits from the book published by George H.W. Bush’s chief photographer, David Valdez, were donated to his presidential library, Mr. Valdez said in an interview.)

The first volume of the memoir written by Mr. Obama after leaving office included a selection of nearly 50 photos taken by the White House photographer who served during his tenure, Pete Souza. George W. Bush and Bill Clinton also published autobiographies that included some White House photos.

But there has been a long tradition of former White House photographers separately assembling their work into books.

“It’s valuable for each chief photographer to do a book just for the historic record and put it together in a way that it tells sort of their story and contextualizes images,” said Mr. Souza, who worked as a White House photographer under Mr. Reagan as well as under Mr. Obama, and who has published several books of White House photos.

Ms. Craighead had served as a White House photographer during the tenure of George W. Bush and was known for her work with mostly Republican politicians including Senators Marco Rubio of Florida and Joni Ernst of Iowa.

But unlike most of her predecessors, who had built relationships with presidents before they arrived at the White House, Ms. Craighead had not worked closely with Mr. Trump when she was hired just before his inauguration after his first pick for the job fell through.

Mr. Trump, former White House aides said, was intensely involved in selecting photos of himself that would be released to the public, with Ms. Grisham recalling how during long flights on Air Force One, he often set aside time to review folders of photographs, after demanding that they be first printed so he could hold them, and pick winners one at a time.

Since leaving office, Mr. Trump has sought multiple ways to monetize his presidency, from charging supporters to attend an event and take photos with him to selling MAGA merchandise. He also has a long history of disputes from before his political career with business partners and over the years faced regular accusations that he did not properly compensate contractors.

The plan to publish “Our Journey Together” came together quickly, after Ms. Craighead had already selected a book agent and negotiated a contract to publish her own book and secured a commitment from Mr. Trump to write the foreword, former White House officials said.

Ms. Craighead herself had some questions about whether she wanted to move ahead with her own book, telling others she was not comfortable publishing a book that would be seen as an endorsement or a disparagement of Mr. Trump.

It was while Ms. Craighead was debating this question that she heard from a representative for Mr. Trump that he would no longer be able to provide her right away with a foreword to the book, because Mr. Trump had a “noncompete” clause with his own publisher.

Donald Trump Jr. and Mr. Trump’s campaign apparatus soon started to send out emails to his political fund-raising list, urging his supporters to buy “Our Journey Together” perhaps as a Christmas gift — an example of how Mr. Trump has mixed his political efforts and his pursuit of personal profit since he left the White House.

Mr. Trump’s book was published by Winning Team Publishing, a company only incorporated in October, and which was co-founded by Donald Trump Jr. and Sergio Gor, a former Capitol Hill aide and Republican campaign operative.

Mr. Gor said the company had sold out the first 300,000 copies — which at $75 apiece for the unsigned version suggests gross sales of at least $20 million, assuming many were not given away. In addition to his advance payment, Mr. Trump is likely to earn a share of all book sales.

The book is not the only way that the Trump family is cashing in on photos by White House photographers. On Presidents’ Day, Mrs. Trump opened sales of a series of digital images from Mr. Trump’s White House tenure — photos of Mr. Trump at Mount Rushmore, exiting Air Force One and in a tuxedo for a White House dinner — for $50 apiece.

This week, after The Times asked his office questions about the book, Mr. Trump called Ms. Craighead. It was the first time they had spoken directly since he left the White House. Mr. Trump told her he was still prepared to write a foreword for a photo book they could do together in the future, Mr. Budowich said.