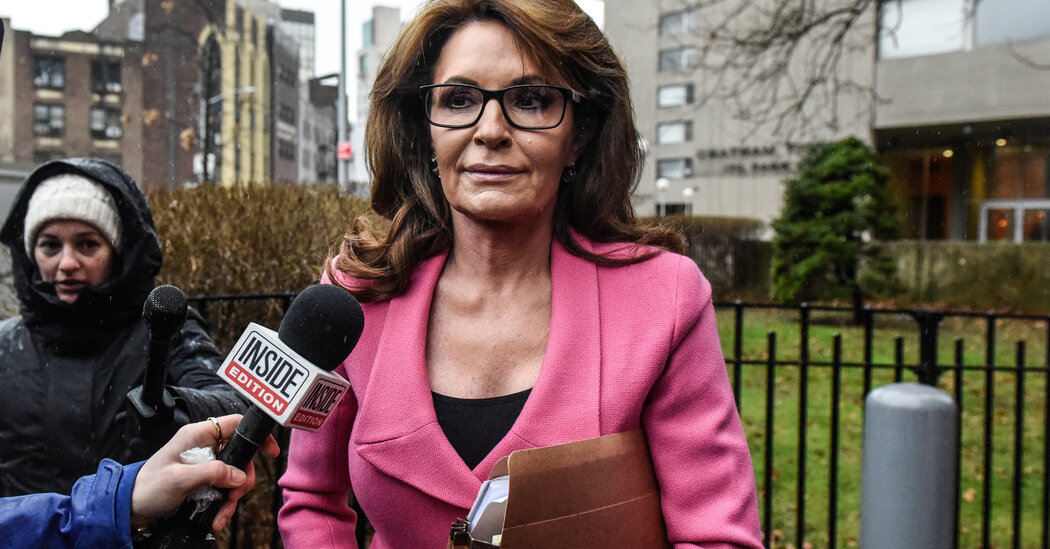 Sarah Palin, a former Alaska governor and the Republican nominee for vice president in 2008, said Friday that she was entering the race for Alaska’s lone congressional seat, marking her return to national politics after she helped revive the anti-establishment rhetoric that has come to define the Republican Party.

She will be joining a crowded field of nearly 40 candidates to fill the House seat left vacant by Representative Don Young, whose unexpected death last month has spurred one of the largest political shifts in the state in 50 years.

Ms. Palin said in a statement that she planned to honor Mr. Young’s legacy, while painting a dystopian picture of a nation in crisis and criticizing the “radical left,” high gas prices, inflation and illegal immigration.

“America is at a tipping point,” she said in the statement. “As I’ve watched the far left destroy the country, I knew I had to step up and join the fight.”

Ms. Palin has suggested launching various campaigns for elected office several times in the years since August 2008, when Senator John McCain plucked her from obscurity and named her as his running mate on the Republican presidential ticket.

But after a long hiatus from political life, Ms. Palin had hinted in recent weeks that she was more serious than she had been in the past about running for office again. In a recent appearance on Fox News with Sean Hannity, Ms. Palin said, “There is a time and a season for everything.”

And she invoked former President Donald J. Trump as an inspiration. The two had shared a stage in 2016 when she endorsed him for president. “We need people like Donald Trump, who has nothing to lose. Like me,” she said.

On the conservative cable network Newsmax, she did not rule out the possibility of running for Mr. Young’s seat last week, saying that she would consider it an honor. “If I were asked to serve in the House and take his place, I would be humbled and honored,” Ms. Palin told the network. “In a heartbeat, I would.”

In her statement on Friday, Ms. Palin pointed to her legacy of service in Alaska, where she was first elected to the City Council in Wasilla three decades ago. She said she still lives in Wasilla and said her loyalty would remain with the state even if she was sent to Washington.

Echoing the red-meat politics that have energized Republican voters, she said the nation needed leaders who would “combat the left’s socialist, big-government, America-last agenda.”

Her decision to enter the race came as she has received national attention for suing The New York Times for libel.

Ms. Palin claimed that The Times defamed her when it published a 2017 editorial erroneously linking her political rhetoric to a mass shooting. A jury threw out the suit, a day after the federal judge in the case indicated he would dismiss the claims if the jury ruled in her favor because her legal team had failed to meet the high legal standards for public figures who claim defamation. The Times, which acknowledged and corrected the error in question soon after it was published, has not lost a libel case in an American courtroom in at least 50 years.

Mr. Young, 88, who was the longest-serving Republican in Congress and who was first elected in 1973, died on March 18. The scramble among potential candidates to fill his unexpired term started almost immediately. Friday was the deadline to file official paperwork, and the Alaska Division of Elections had received submissions from 37 candidates by Friday afternoon.

Ms. Palin will face a host of both far-right and establishment Republican rivals, including Nick Begich III, the Republican scion of Alaskan political royalty; State Senator Joshua Revak, an Iraq war veteran who previously worked for Mr. Young; and Tara Sweeney, who served in the Trump administration as assistant secretary of the interior for Indian affairs.

“She certainly has a constituency,” Art Hackney, a consultant on Mr. Revak’s campaign, said of Ms. Palin, adding that “whoever wants to file” will have to “bring it on” to defeat Mr. Revak.

Ms. Palin will also have some formidable progressive challengers, including Al Gross, a former orthopedic surgeon who ran unsuccessfully for Senate in 2020 and is running as an independent, and Christopher Constant, an openly gay Democrat who is a member of the Anchorage Assembly.

Ms. Palin, who became one of only three women to run on a major party’s presidential ticket, had declined to seek the presidency in 2012, when several of the activists who would help Mr. Trump get elected tried to convince her to run against former President Barack Obama.

Lately, she has been back on Fox News, which once employed her as a contributor for $1 million a year, laying the groundwork for her campaign.