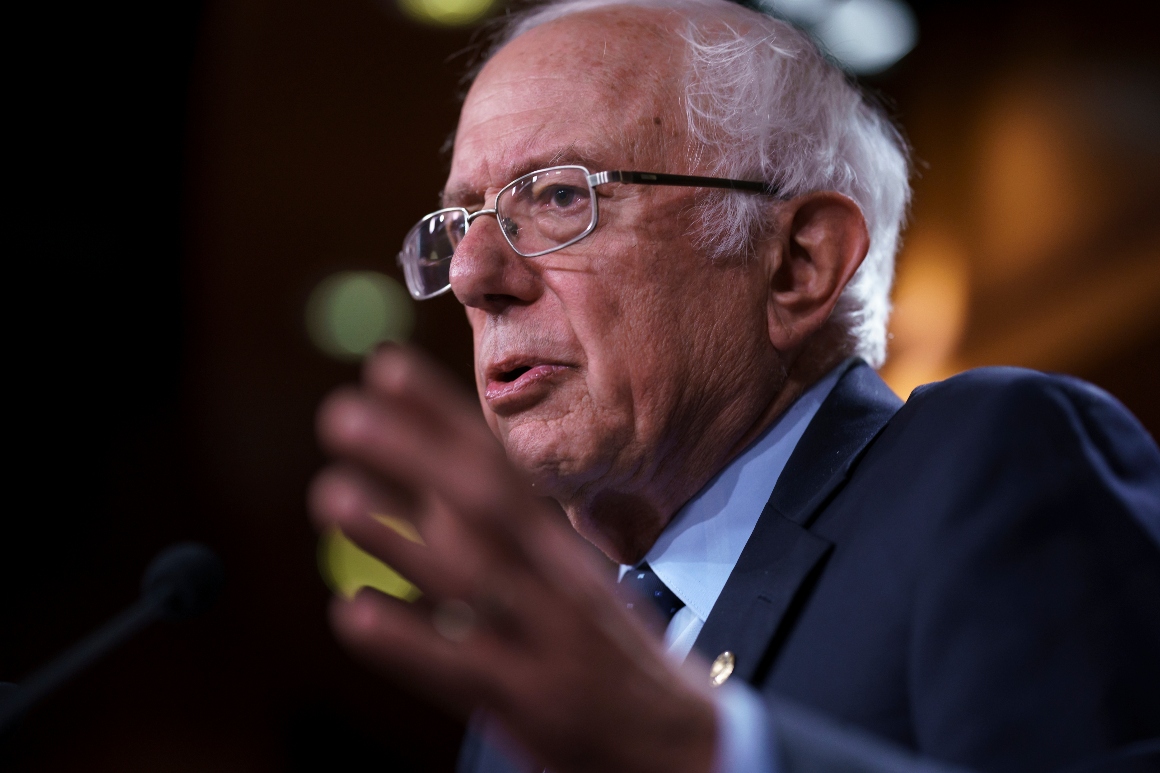 But as the rocket maker gears up for the new competition, it’s also working behind the scenes to combat the Vermont Independent’s assault on its possible role in NASA’s public-private partnership to land on the moon by 2025, according to Blue Origin officials and congressional staff.

Senate leaders have promised Sanders a vote as soon as Thursday on a resolution urging Congress to strip a provision from a pending bill that would authorize an additional $10 billion for moon landers, calling the measure “a bailout to Jeff Bezos so that his company Blue Origin can launch a rocket ship to the moon.”

But the $10 billion, if it is subsequently appropriated by Congress, would actually be granted to NASA to choose between multiple companies — with no guarantee that Blue Origin would be the winner.

The space agency’s public-private partnership is also designed so the winners kick in a significant amount of their own money — a novel approach that the Biden administration said this week it plans to expand to develop a more permanent presence on the moon and foster a commercial space economy.

Sanders’ broadside is among his highest profile attempts yet to try to use space billionaires such as Bezos and Musk to strengthen the progressive case for addressing income inequality and curtailing the influence of corporations to secure public money.

“There are some people who want to frame this as social inequity and economic inequity,” said Casey Dreier, senior space policy adviser at The Planetary Society. “That is why you see people like Bernie Sanders are latching on to this.”

“We are seeing the association of spaceflight with divisive individuals being used to drive somewhat unrelated policy issues,” he added, “when in reality, Jeff Bezos is losing money on this.”

Sanders’s office declined to respond to the criticism that his claims about the moon plans are misleading.

Since NASA chose SpaceX a year ago to build its lunar lander, Blue Origin has been lobbying Congress and NASA to open the program back up for competition. Along with fellow losing bidder Dynetics, Blue Origin formally protested the $2.9 billion award to SpaceX, and then unsuccessfully sued NASA.

Blue Origin has leaned on supporters for a second moon lander in Congress, including home state Sen. Maria Cantwell (D-Wash.), who chairs the Commerce, Science and Transportation Committee.

Cantwell has been the primary booster for authorizing more money after NASA said last year it didn’t have enough funding to finance a second moon lander.

Blue Origin even offered to waive a $2 billion payment from NASA for the chance to participate in the lander program.

NASA announced last week that it wants SpaceX to build a second lander and will also be releasing a new request for proposals in the coming weeks seeking other bidders.

Developing an alternative design to SpaceX’s to land astronauts on the moon was NASA’s original strategy but it said it didn’t have enough money for two contracts.

On Monday, it released a new budget request for next year that sets aside $1.5 billion for the program, and sketches out plans to increase that investment annually over the next three years.

Blue Origin said in a statement it was “thrilled” that NASA has decided to pursue a second lander and “is ready to compete.”

But the latest development has only fueled Sanders’ accusations that Bezos, whose e-commerce behemoth Amazon and grocery chain Whole Foods are favorite targets of progressives for their labor policies, is trying to sidle up to the public trough when he can afford to finance his moon efforts independently.

Sanders has been railing for months against the company and the moon funding, trying to depict Bezos and his space ambitions as symbols of economic disparity and government largesse at taxpayers’ expense.

“If Mr. Bezos wants to go to the moon, good for him,” Sanders said in remarks on the Senate floor last week. “He has $186 billion in personal wealth. He became $81 billion richer during the pandemic. He is the second richest person in America. And, in a given year, Mr. Bezos has paid nothing in federal income taxes.

“If he wants to go to the moon,” the former Democratic candidate for president added, “let him use his own money, not U.S. taxpayers’.”

Sanders has been threatening to hold up consideration of the United States Innovation and Competition Act of 2021 unless he gets a vote on a resolution urging House and Senate negotiators to drop the moon lander provision.

The legislation, which is designed to strengthen America’s technological edge over China, has passed both the House and Senate. The two chambers are now in the process of setting up a conference committee to hash out a final bill.

Sanders’ resolution would urge the negotiators to strip the moon lander funding.

The exact details of his resolution or when it will come to the floor are still being determined. “We won’t really have timing until the conference committee comes over from the House, and don’t have text for you at the moment,” his spokesperson, Freeland Ellis, said via email on Wednesday.

In the meantime, Blue Origin has been “making lots of phone calls” to Capitol Hill in recent days to try to combat Sanders’ narrative, which it insists is a wild mischaracterization of what’s happening, according to an industry official with direct knowledge of the lobbying campaign.

Another space industry official involved in the effort said the company worries that Sanders’ campaign could hurt its prospects in the upcoming NASA competition.

The officials were not authorized to speak publicly about private deliberations.

Blue Origin reps declined to speak on the record about its counteroffensive. But a major talking point, its advocates said, is that the Human Landing System program, unlike most NASA programs, is a public-private partnership in which the manufacturers put up significant funding of their own and the vehicles will not be government-owned.

“This is very different from the old days when a contractor wouldn’t proceed with any program unless it was completely funded by the government,” said Robert Walker, a former chair of the House Science Committee who is now CEO of moonWalker Associates, a consulting firm.

“Bernie doesn’t seem to have any problem when we’re giving government subsidies — and most of them are not public-private partnerships — for green energy technologies,” Walker added.

Dreier said those who support Sanders’ view either don’t know the details of the project or purposely ignore them because they undermine their argument.

“I don’t think one of the things they take into account is how much institutional investment the [landing system] provider also contributes,” he said. “So SpaceX is putting some money into Starship. And if Bezos’ company wins a future competition,” he added, “Blue Origin has made it clear that their money will go into [its lander] as well.”

NASA also refuted Sanders’ characterization of the lander program as geared toward a single vendor.

“NASA’s plan to hold a competition to develop a second lunar lander will help ensure NASA has the technical capabilities to transport astronauts to the lunar surface throughout the Artemis program and increase the cadence of astronaut landings, which is critical to the United States’ continued global leadership in space,” Alicia Brown, NASA’s associate administrator for the Office of Legislative and Intergovernmental Affairs, said in a statement.

“Increased competition not only leads to better, more reliable outcomes — it also benefits the American people,” she added.

For the upcoming moon lander competition, Bezos’ pitch may also have some key allies in its corner. Its original bid that lost out to SpaceX included partners Lockheed Martin and Northrop Grumman as part of a “national team.”

The trio is considering making another go of it. “We’re evaluating our options and look forward to competing for this exciting capability,” Lockheed said in a statement.