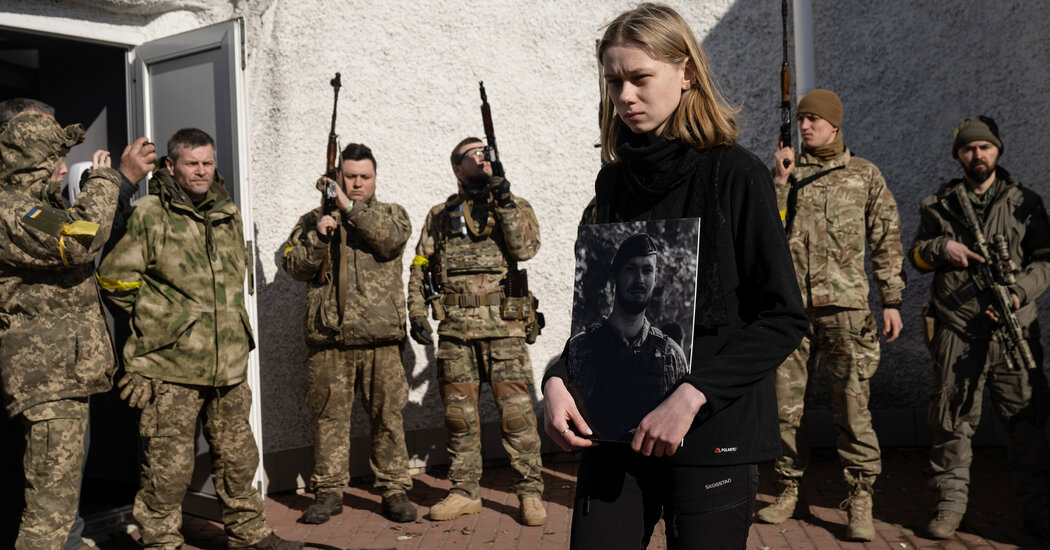 The top diplomats of Russia and Ukraine failed to make even a hint of progress Thursday in their first face-to-face meeting since the Russian invasion began, while Russian bombardments spread more carnage in a two-week-old war that Ukraine estimated had already inflicted $100 billion in damage.

The Russian side, which has refused to call the conflict a war, insisted that it would not end until Ukraine was “demilitarized,” dousing flickers of hope that the meeting in Turkey of Foreign Minister Dmytro Kuleba of Ukraine and his Russian counterpart, Sergey V. Lavrov, might lead to even a brief cease-fire. Mr. Lavrov later told reporters that was not even discussed.

“The broad narrative he conveyed to me,” Mr. Kuleba said afterward, “is that they will continue their aggression until Ukraine meets their demands, and the least of these demands is surrender.”

Across swaths of Ukraine, the fighting continued and suffering deepened, especially in besieged and bombarded cities like Mariupol in the southeast and Chernihiv in the north.

Near Kyiv, Russian forces gained control of the town of Bucha and moved southwest in an attempt to encircle the capital. They were also approaching Kyiv from the east, with heavy fighting involving a line of Russian tanks reported in the suburb of Brovary, according to videos posted online on Thursday.

In Mariupol, 70 bodies have been buried since Tuesday, without coffins, in a mass grave, according to video recorded by The Associated Press, and local officials said an airstrike that destroyed a maternity hospital on Wednesday had killed three people, including a child. In Chernihiv, residents lacked electricity, gas for cooking or warding off the winter cold, or even space to bury the dead, said the mayor, Vladyslav Atroshenko.

President Volodymyr Zelensky of Ukraine, in his latest video message, said the hospital bombing in Mariupol, a port on the Sea of Azov, was further “proof that the genocide of Ukrainians is taking place.”

Despite photographs of the ravaged hospital and victims of the bombing, corroborated by the United Nations, Russian officials denied having hit the hospital, or alternatively said it had not been used as a hospital. Attacks on medical facilities can constitute war crimes.

The chief economic adviser to Ukraine’s government, Oleg Ustenko, estimated that his country had already suffered $100 billion in damage since the invasion began Feb. 24. “The situation is a disaster that is really much deeper than somebody can imagine,” Mr. Ustenko said at a Peterson Institute for International Economics virtual event.

Vice President Kamala Harris, in Warsaw to meet with Polish officials, said Russians should be investigated for war crimes in Ukraine, though she did not name any individuals. Ms. Harris, a former prosecutor, said, “I have no question the eyes of the world are on this war and what Russia has done in terms of the aggression and these atrocities.”

President Vladimir V. Putin of Russia has insisted that Ukraine disarm, guarantee that it will never join the NATO alliance and officially cede parts of its land by recognizing two Russian-backed separatist regions as independent countries and accepting Russia’s 2014 annexation of Crimea.

Mr. Putin’s false claims that Ukraine’s government is run by Nazis and that his goal is “denazification” of the country suggest, as Western governments have charged, that he intends to install a puppet government in Kyiv. But conflicting statements from Moscow have left unclear whether he intends to occupy some or all of the country, or annex more of it, or how far he would go in devastating Ukraine in order to subjugate it.

“Putin’s military plan to quickly capture Ukraine, it is clear now, has failed,” Ned Price, the State Department spokesman, told reporters in Washington on Thursday. “So he’s now turning to a strategy of laying waste to population centers, to try to break the will of the people of Ukraine — something he will not be able to do.”

On Thursday, Congress approved $13.6 billion in emergency aid for Ukraine as part of a $1.5 trillion spending bill. President Biden was expected to quickly sign the legislation.

On Friday, Mr. Biden will announce that the United States will join the G7 and the European Union in calling for the suspension of normal trade relations with Russia, according to a person familiar with the announcement, who was not authorized to speak publicly about it. Each country will implement the suspension based on its own national processes, the person said.

Besides the thousands of Ukrainian soldiers and civilians killed since the invasion began, a U.S. official estimated that 5,000 to 6,000 Russian troops had died. The figure was roughly double the estimate of 3,000 just days earlier, but experts cautioned that casualty numbers are difficult to assess. Ukraine has estimated far more Russian casualties, and Russia has acknowledged far fewer.

Mr. Putin on Thursday played down the effects of intensified Western sanctions, even though they are already crippling Russia’s economy and have been compounded by the withdrawal of hundreds of Western businesses that had operated in Russia. Three decades of economic engagement with the world since the fall of the Soviet Union have unraveled in a matter of days.

“In the end, it will enhance our independence, self-sufficiency and sovereignty,” Mr. Putin said at a meeting of government officials. And he referred to the possibility that Russia could nationalize the assets of foreign companies that have left.

The European Union and Britain added more wealthy Russian individuals and organizations to their blacklists of those, now numbering well over 1,000, facing direct sanctions like asset freezes and travel bans. In Britain they included Roman Abramovich, owner of the elite Chelsea soccer team, effectively taking control of the team away from him.

Mr. Abramovich has denied links to Mr. Putin, but the British government — often accused of catering to wealthy foreigners who invest in the country — said that in fact they had a “close relationship” for decades, and that Mr. Abramovich had benefited financially from it.

In another outcome of the war, worries also were rising Thursday over the Russian seizures of nuclear power stations at Chernobyl, the defunct plant that is home to the world’s worst nuclear accident, and Zaporizhzhia, the biggest nuclear producer of electricity in Europe.

Outside power to Chernobyl has been cut, forcing it to operate on backup generators; without power, it cannot keep spent nuclear fuel safely stored, risking a radiation release. While plants continue to be managed by Ukrainian staff, experts say the conditions raise serious safety questions.

Rafael M. Grossi, director general of the International Atomic Energy Agency, described “a very dire situation” at the plants, adding, “We need to move fast.” Mr. Grossi met Thursday with Mr. Lavrov and Mr. Kuleba in Turkey and said both sides had agreed to negotiate safety arrangements for the plants.

Before the invasion, Western analysts and even many Ukrainian commanders expected Russia’s much larger and more technologically advanced military to quickly overwhelm the Ukrainian forces, capturing Kyiv and other major cities. But the Russians have advanced slowly, taking just one large city, Kherson, as they have faced logistical setbacks. The Ukrainians, armed by the United States and its allies, have vexed the invaders with an unexpectedly stiff defense.

No agreement. The Foreign Ministers of Ukraine and Russia met in Turkey, for the first time since the start of the war, and failed to stop the fighting. Foreign Minister Sergey V. Lavrov of Russia declared that a cease-fire was never up for discussion.

“Russian forces have likely begun renewed offensive operations into Kyiv and to continue its encirclement on the west, but have not made much progress,” said the latest assessment from the Institute for the Study of War, a Washington-based group monitoring the conflict.

The Russian military is still capable of completely surrounding Kyiv in a week or two, a U.S. official said, and the battle for the city could take a month or more.

Mariupol in particular, bombarded by the Russians and fiercely defended by Ukrainian fighters, has become a humanitarian disaster for the hundreds of thousands of desperate civilians trapped there. People have felled trees to burn for heat and cooking, and local authorities have instructed residents to wrap the dead and leave them outside for collection.

The bombing of the maternity hospital on Wednesday — along with other civilian buildings — sent bloodied, pregnant women fleeing into the surrounding rubble and added to a death toll that local officials say numbers at least in the hundreds.

“Bombs are falling in Mariupol all the time,” said Halyna Odnoroh, an activist who managed to leave the city but whose daughter remained there. “Buildings are falling to the ground as if they were made of matchsticks. We need help!”

Agreements on establishing “humanitarian corridors,” to allow civilians to leave cities and essential aid to enter, have repeatedly collapsed. Ukraine claims that continued Russian bombardment and blockades have made such movement impossible, which Russia denies.

The Russian military on Thursday offered escape corridors — not westward, where the overwhelming majority of Ukrainians are fleeing, but eastward, to Russia.

As diplomatic jockeying over the war intensified around the world, China on Thursday doubled down on its claim, backing up Russian allegations, that the United States was developing biological weapons in Ukraine, which American officials heatedly dismissed as “outright lies.” China has drawn closer to Russia in confrontation with their common adversary, the United States, but has signaled that it wants the Ukraine conflict resolved peacefully.

“Russia is inventing false pretexts in an attempt to justify its own horrific actions in Ukraine,” the State Department said in a statement, while the White House press secretary, Jen Psaki, wrote on Twitter that the claim was “preposterous.’’

Russia’s Defense Ministry has released documents it claims to have discovered detailing Pentagon-funded “secret biological experiments” at laboratories in two Ukrainian cities, Kharkiv and Poltava. Their veracity could not be determined. The Institute for the Study of War issued its own warning on Wednesday that Russia’s claims could be part of an effort to lay the groundwork for a Russian chemical or biological attack.

Ms. Harris, on a three-day trip to Poland and Romania, and President Andrzej Duda of Poland deflected several questions about a proposed transfer of Soviet-made fighter jets to Ukraine. Poland, not wanting to transfer them directly, had said it would give the jets to the United States in return for newer ones, and the Americans could forward them to Ukraine.

U.S. officials said the plan was unworkable, but they have not made it clear whether Washington sees supplying warplanes — an escalation in the type of weaponry going to Kyiv — as too provocative.