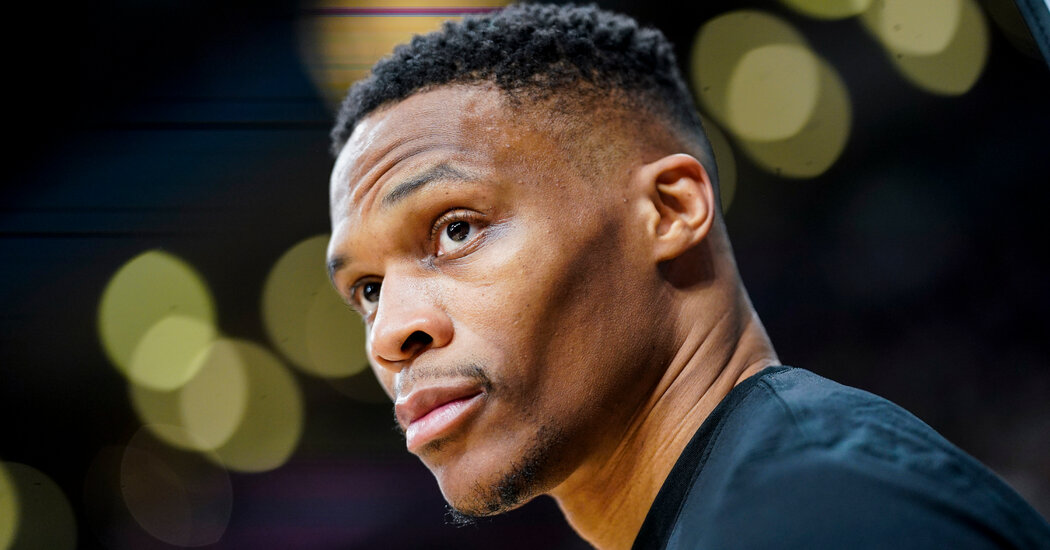 The crowd at this late-February blowout to the lowly New Orleans Pelicans had turned fast. The boos and taunts were so bad that Mr. Westbrook’s Los Angeles Lakers teammates looked ready to confront fans in the first row. LeBron James got into a sideline debate with one trash talker, while Trevor Ariza had to be physically restrained from confronting another.

“You’re not Kobe, you’re not Kobe,” a fan slurred, said Michael Morales, who filmed the courtside exchange at the Crypto.com Arena in Los Angeles.

Drunk people yelling is normal. Athletes yelling back isn’t — especially at fans in seats that run $3,500 a pop.

“I’m a die-hard Laker fan,” said Mr. Morales, a 38-year-old postal worker who drives across town after every shift, coming to more games than Jack Nicholson and posting close-up clips that can earn him thousands of dollars on Facebook Reels. But “right now,” he said, “it’s hard to watch.” Mr. Morales’s pain, and extra income, will end soon: On Tuesday night, after a loss to Phoenix, the Lakers were eliminated from the postseason.

Mr. Westbrook joined the Lakers last July, after stints on the Houston Rockets and Washington Wizards marred by injury and a case of Covid, in a blockbuster trade that brought him to the team he grew up idolizing.

Though his performance this season has made him the target of angry fans, much of Mr. Westbrook’s off-court life seems to be thriving. There’s a revealing new Showtime film, a History Channel documentary, a recent art book, a clothing line with a new collection, along with an educational foundation and community involvement that belies his temperamental image.

All of that should come as no surprise to many who have followed his career or been involved with it. “He knows how to be a star,” said Simon Doonan, who spent three decades as Barneys New York’s creative director.

Mr. Doonan, now a judge on the TV show “Making It,” calls past collections with Mr. Westbrook where he “selected fabrics, working on and approving designs,” and shot videos together, “the most fun I’ve had in my career.”

But while Mr. Westbrook’s off-court life is filled with successes, his basketball season has been so rocky that the hometown faithful have turned on the Los Angeles native — so much so that his wife recently tweeted that the family had been sent “death wishes.” The former Laker Shaquille O’Neal has advised slowing down, and he’s even been benched and shopped in trade talks.

Mr. Westbrook has reacted to the boos and taunts of “Westbrick” with defiance; speaking to a pool of reporters after the Pelicans loss, he said, “I got three beautiful kids at my house, my wife, I ain’t taking it home.”

But just days later, in a postgame interview, he shifted, saying that the taunts had gotten to him, alluding to more important things than basketball, a revelation that was a similar vein to the Showtime film, “Passion Play,” in which he is introspective in a way that can still be uncommon among professional athletes. “The way I compete has made me an easy target,” he says in the film, almost as if there are two Russells. “In the sports world, I am the bad guy. People don’t really understand who I am. I’ll be lying to say it didn’t affect me.”

Born in Long Beach, Calif., Mr. Westbrook grew up in Hawthorne, near South Central Los Angeles, went to high school in Lawndale, then spent two years in Westwood at the University of California, Los Angeles. He entered the N.B.A. in 2008 and immediately became known for his fiery play and fashion sense.

Being 6-foot-3 means he can shop off the rack, but he rarely plays it safe, preferring vivid patterns or, say, a white kilt at the Thom Browne spring 2022 show — bold statements in the hyper-macho sports world.

He has embraced his role as fashion star with vigor, spending fashion weeks in New York, Paris and Milan with the likes of Anna Wintour, Carine Roitfeld, Raymond Pettibon and Tim Coppens.

“You wouldn’t want to get in his way on the court. In person, he’s totally different,” said Anthony Petrillose, the associate publisher of Rizzoli New York, which published “Russell Westbrook: Style Drivers,” with cover art by Mr. Pettibon. “The experience was, ‘I’m here to learn, I want the best possible book — how do we do it?’”

Honor the Gift, Mr. Westbrook’s fashion brand, has done pop-ups in Los Angeles and Paris and released a collection earlier this month called the Concrete Jungle. The summer capsule collection was a homage to swap meets; last fall, it was a halcyon reimagining of the soul soundtrack to growing up in Hawthorne.

“Russell takes fashion every bit as seriously as he does being a point guard,” said Ms. Wintour, who last saw him in November at Madison Square Garden, where he “generously presented me with his sneakers postgame. They were a little too large for me, but fortunately I was with my 6-4 nephew, who happily took them.”

But the Lakers lost that night — and Mr. Westbrook looks unhappy on the job. While he’s worked with Nike’s Jordan brand on a full-foot system for his shoes, pored over Honor the Gift designs, and carefully constructed his homecoming, the basketball fit in Los Angeles has been bumpy.

In June of last year, Honor the Gift teamed with Jordan and Mr. Westbrook’s Why Not? Foundation, building a basketball court and sponsoring tech and design workshops at a Y.M.C.A. in the city’s Crenshaw District. (Jordan has produced Westbrook’s signature shoe and Why Not? apparel since 2018.) The nonprofit foundation, named after a favorite saying, supports social initiatives and schools.

“Style is a weapon and that doesn’t end with clothing,” said Sam Sohaili, who runs DMA United, a creative agency that has worked with Mr. Westbrook on brand deals. “Russell’s style is how he interacts with people.”

Such interactions support the two-Russells theory: relishing the villain role, then playing opposite. (Despite multiple attempts, Mr. Westbrook declined to comment for this article.)

Playing in Los Angeles also means Hollywood. “Tulsa Burning: The 1921 Race Massacre,” which he executive produced, premiered last May and other projects are in development.

And just when he appears to be another celebrity cashing in, he crosses over. During a grueling playing period in December, days after entering the N.B.A.’s safety protocols because of positive coronavirus tests in the team’s traveling party, then testing negative for Covid, Mr. Westbrook donned a Santa hat and grinchy tracksuit, posed for photos and gave every Why Not? student new sneakers.

“Sometimes the priority ain’t what you get paid for,” noted the legendary Compton rapper DJ Quik just before the Lakers were crushed by the crosstown Clippers in March.

South of the Crypto.com Arena, at Leuzinger High School in working-class Lawndale, one of the first things you see is a 50-foot mural of a soaring you-know-who plastered on the Gloria Ramos Cafeteria. Across campus, in the Thompson Gymnasium, a familiar name and jersey number hang above the court where Mr. Westbrook led the Olympians to a 25-4 record as a senior back in 2006.

“It was inevitable that he’d go to the N.B.A.,” recalled Patrick Cleveland, a high school teammate who lived down the street from Mr. Westbrook and now coaches and works as a safety officer here.

We spoke just as the trade deadline passed and the Lakers decided not to deal Mr. Westbrook. In Lawndale he’s still a prince of the city who came up hard, made good and stayed true.

To understand the two Russells means understanding a tragic what if, said Marlon Mendez, a coach from back in the day and now the school’s athletic director. What if Mr. Westbrook’s best friend Khelcey Barrs hadn’t collapsed after a string of pickup games at Los Angeles Southwest College on May 11, 2004?

Khelcey was a 6-foot-6 sophomore headed for the N.B.A., until a heart condition ended everything at 16. “We all had that chip on our shoulder, but Russell took it on,” Mr. Cleveland said. “Everybody thinks he’s this high-energy guy. People don’t understand what he plays for. We were all hurt, but he was the one who was able to make that name continue. I’m grateful Russell made it and carried that name with him.”

After he died, Mr. Westbrook would walk across the street and do Khelcey’s chores before class. Today, he wears wristbands and shoes with the initials KB3, Leuzinger basketball is sponsored by Jordan and the onetime high school star remains a fixture.

“I grew up around him,” said Amire Jones, a 16-year-old junior and guard from Compton. “At school, games, Jordan events. It’s crazy because an N.B.A. player went to your school and he’s someone I can reach out to.”

It’s not uncommon for Mr. Westbrook to drop in, said Mr. Jones, the son of the Leuzinger coach Arturo Jones, one of many formative figures Mr. Westbrook still leans on. “His legacy provides opportunities for us. He’s uplifting. Once I was working out with him, missing shots, he pulled me aside. He said: ‘Confidence, don’t stop. You miss 20, keep shooting.’”

What about Mr. Westbrook’s own confidence? The boos?

“There’s a lot of negativity around him for no reason,” Mr. Jones said. “He’s going to keep shooting. He doesn’t care. It’s Russ.”