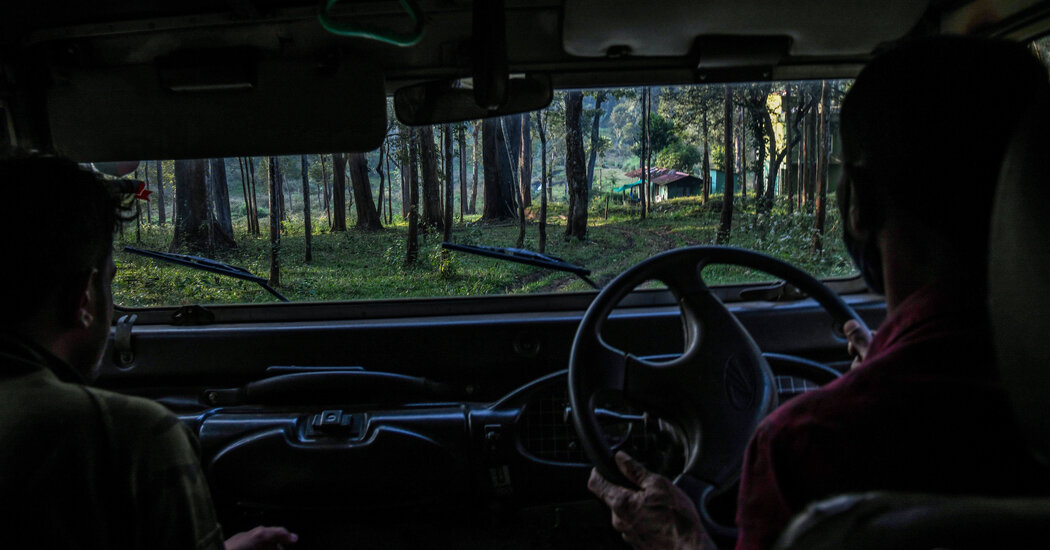 WAYANAD, India — Armed only with a bamboo stick, Bijesh T.K. was part of a team looking for a tiger that had escaped from a wildlife sanctuary. But it was the tiger that saw him first.

“It tried to bite my neck, but thankfully my helmet protected me,” he said, describing the attack last year near Wayanad, in the southern state of Kerala. “Its jaw was so wide that my whole head could have fit inside.”

There was nothing his colleagues could do. They tried to shoo the tiger away, but it clamped its teeth onto Mr. Bijesh T.K.’s right arm, refusing to let go, before finally slipping back into the wilderness. His arm was left permanently damaged.

Mr. Bijesh T.K. and hundreds of other part-timers across India risk their lives every day for a frontline job that is vital for preserving the country’s forests but often pays less than minimum wage.

They battle poachers, criminal gangs, fires and other disasters, and in this part of the country, where forests mingle with villages, they are the de facto peacekeepers between humans and wildlife.

It’s a broad mission that involves deterring wildlife from eating crops and livestock near protected areas, while also guarding both the lives and livelihoods of local residents and the wildlife that could face reprisal attacks by communities.

This part of southern India has the largest contiguous tiger population in the world, with more than 720 tigers prowling a biodiversity hot spot in the Western Ghats, moving among at least five tiger reserves that sprawl across three states.

This region also has the largest Asian elephant population in the world, and wild elephants are a common sight.

“The herd comes trooping through our yard at 7:30 p.m., several days a week,” said Lalitha, 72, who uses one name. “We can’t grow anything here. If the elephants don’t destroy it, then the deer or the wild boar come and eat our fruit and vegetables. We can’t step out of the house at night.”

Forest watchers, who report to guards recruited at the state level, are typically ill equipped to deal with such situations. They are often members of local communities and Indigenous tribes who traditionally helped with tasks like patrolling protected areas and fighting forest fires.

Mr. Bijesh T.K., 38, received the helmet and a safety jacket only days before he was attacked. That meager protection had been a hasty response to another mauling by the same tiger.

But as a part-time forest watcher, he was not eligible to receive compensation from the Kerala forest department after the attack. The government helped pay for his treatment and continued to pay his monthly salary of $108. The $334 he got from a nonprofit group went to medical expenses.

“Foresters need to be given the same respect that our armed forces get,” said Vivek Menon, the founder of the Wildlife Trust of India, which gave Mr. Bijesh T.K. the extra money and has been pushing for more recognition for frontline staff members.

“They protect vast areas of India’s land, our entire ecological heritage, but many of them are temporary staff who don’t even have life insurance in case they die on the job,” Mr. Menon said.

Before the attack, Mr. Bijesh T.K.’s primary source of income was masonry — work he can no longer do. So, despite his trauma and the relentless nature of the work, he signed up as a full-time forest watcher. But his salary — just $143 a month — is still desperately low, and he struggles to provide for his family of five.

Each night he’s out chasing away wildlife foraging for food in neighboring villages — mostly elephants, boar and deer but occasionally tigers and leopards. He’s armed with a flashlight and some firecrackers to drive the animals away. In the daytime, he must check the electric fencing that keeps the elephants out and look out for forest fires in the summers.

Most forest watchers are hired as contractors, receiving a fraction of the salary and benefits that permanent government employees earn. Many spend decades working part time.

Interviews with staff members in different regions of the country revealed a similar tale of a system in desperate need of overhaul. While several senior officers spoke of how they were trying to improve the working conditions of frontline staff members, they expressed frustration with a system that seemed designed to hamstring them at every turn.

“Forest staff should be officially designated as frontline staff across the country,” said Gaurav Sharma, a division forest officer in charge of two million acres in Panna, in Madhya Pradesh State. “We did not even get vaccinations on priority when other frontline workers like the police force were getting vaccinated. Many of my staff caught Covid during the brutal second wave last year, and I lost four or five members of my team.”

There is little data on serious injuries to forest watchers in India, but the country has recorded at least 318 ranger deaths since 2012, according to the International Ranger Federation.

In India, many forest staff deaths happen in incidents in remote areas miles away from medical assistance. Guards and watchers typically live in field posts set up inside the forests for weeks at a time. Each beat guard is responsible for 1,200 to 3,700 acres of land.

Depending on budgets, there may be a watcher or two to assist each guard. They are required to patrol the area on foot and get only four days off a month to visit their families. Often the posts don’t have electricity or running water.

In Wayanad, government funding is scarce in part because it is not an official tiger reserve — though, with 120 tigers, according to a 2018 census, it has more of the animals than many marquee tiger reserves. Some Wayanad residents oppose the designation over fears that they would be forcefully relocated outside park limits.

Many watchers complained of getting paid only for 10 or 12 days a month despite working for nearly 30, not including overtime. In the northern state of Uttar Pradesh, more than 1,200 forest watchers recently filed a plea in the Supreme Court, saying they had not been paid in over a year.

Forest workers say they’re sometimes frustrated by the lack of support from the communities they serve.

“People need to realize that our work is crucial in maintaining biodiversity. Everyone wants more tigers, but nobody wants them in their own backyard,” said Mr. Sharma, the official in Madhya Pradesh.

As Mr. Bijesh T.K. heads out in the evening to do his job, his family worries about his safety. With his injured arm, he may not survive another animal attack. He has applied to be a permanent forest watcher, which would offer him better pay and benefits, but he hasn’t heard anything so far.

“Every time I close my eyes, I can see the tiger diving toward me,” he said. “But I have no choice. I need to support my family.”