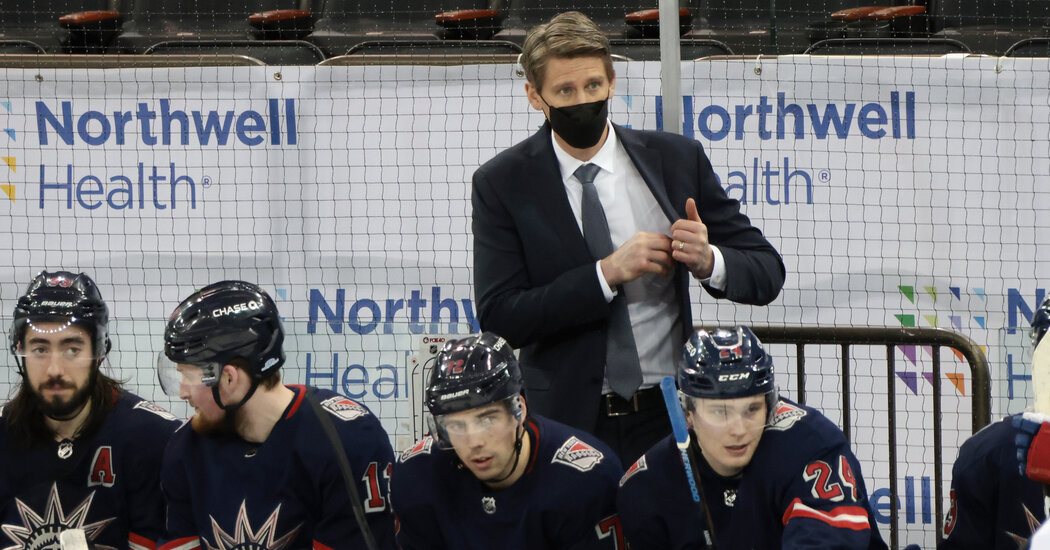 The Rangers got news shortly before Wednesday’s game against the Philadelphia Flyers: Coach David Quinn and his entire staff would miss the game, ordered to stay away because of the N.H.L.’s coronavirus protocols.

Two minor-league coaches were summoned to run the team, joined behind the bench by a team executive hurriedly deputized as an assistant coach. For a Rangers team whose consistent feature has been their inconsistency, though, none of this proved to be a problem. Mika Zibanejad scored three goals and added three assists in a seven-goal second period as the Rangers pummeled the Flyers, 9-0.

“It’s been a different year, a different season,” Zibanejad said. “Around the world as well there were a lot of firsts this year.”

“Obviously you get a little shock when you hear that,” he said of learning the team’s entire coaching staff would be absent, “but you have to adapt.”

For one night at least, the Rangers took the ice under the direction of Kris Knoblauch, the coach of their American Hockey League affiliate in Hartford; his associate coach, Gord Murphy; and the Rangers associate general manager Chris Drury.

They replaced Quinn and his assistants Jacques Martin, David Oliver and Greg Brown, who were isolated from the team temporarily. It is unclear when Quinn and the other coaches will be cleared to return; the Rangers’ next games are Friday and Saturday night at Washington.

The last-minute scramble was not unprecedented, in the N.H.L. or in the N.B.A., in the coronavirus era. The Vegas Golden Knights were coached for one night in late January by their general manager, Kelly McCrimmon, when their coaching staff had to be isolated because of a positive test. And the Toronto Raptors briefly played on without their head coach, Nick Nurse, and five of his assistants after they all were ruled unavailable late last month. Nurse eventually missed three games.

Knoblauch had conducted practice with his team, the Hartford Wolfpack, on Wednesday morning before getting a call from Drury asking him to travel to New York for the game at Madison Square Garden. After grabbing Murphy to help, Knoblauch said he was in contact with Quinn multiple times during the day.

“Everything was planned out,” said the 42-year-old Knoblauch, a former Flyers assistant coach in his second year coaching the Rangers’ top minor-league team. ‘We had a Zoom plan, had the video set up. Murph and myself went over the video, talking points and matchups. We didn’t really have time other than to implement what he had planned.”

Despite the unusual circumstances, the Rangers played perhaps their most dominant game of the season. Most notable was the performance by Zibanejad, who said before the abbreviated season started in January that he had already recovered from his own bout with the coronavirus. Zibanejad has struggled this season; he entered Wednesday night with only three goals in 27 games.

His six points in the second period eclipsed the team record previously set by Bill Cook on March 12, 1933, against the New York Americans. And the 27-year-old Zibanejad became only the second player in league history to record six points in one period, joining Bryan Trottier of the Islanders, who did it in a 1978 game against the Rangers.

Knoblauch said his message to the team before the game was simple. “It was just to try not to complicate things,” he said. “Just go out and play and trust that we have what it takes to win a hockey game.”

Pavel Buchnevich also had two goals and two assists in the second-period outburst, which was one short of the Rangers record of eight goals in one period — set in a 12-1 trouncing of the California Golden Seals on Nov. 21, 1971. Alexandar Georgiev recorded his sixth career shutout while Brendan Lemieux, Artemi Panarin, Jacob Trouba and Filip Chytil also scored for the Rangers, who improved to 12-12-4. They are in sixth place in the East Division, and will need to pick up their pace to move into playoff contention.

Knoblauch, who said he packed sufficiently in case he will have to coach the Rangers in Washington this week, said any initial jitters dissipated when the Rangers took a 2-0 lead over the Flyers, who had defeated them in overtime on Monday.

“When the game started, there were definitely some nerves and excitement but then you get into game mode or coach mode when you call out that first line,” he said. “It is certainly a night I will never forget.”