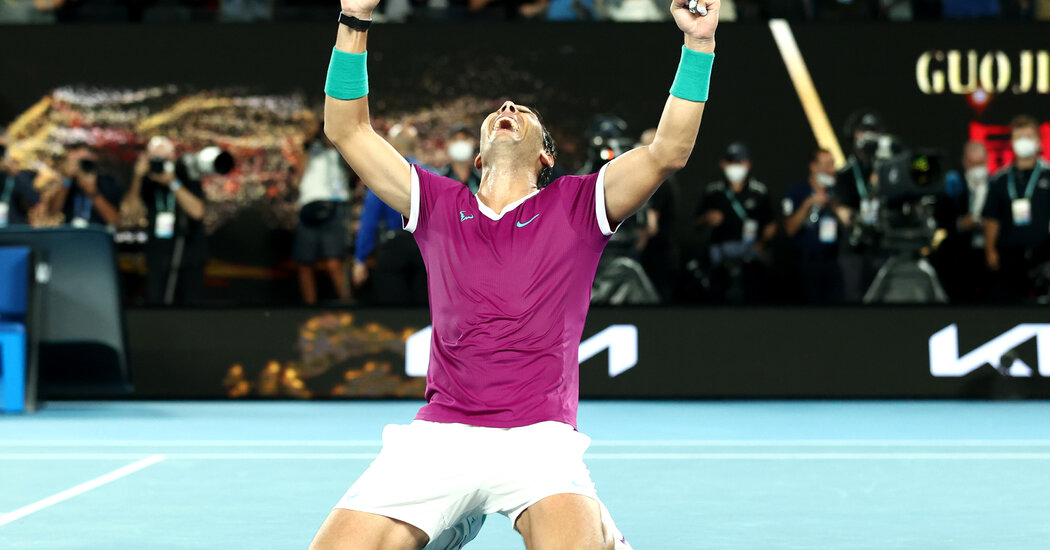 MELBOURNE, Australia — For an aging champion who has earned his reputation as one of the greatest competitors in sports, it was a fitting way to stand alone with 21 Grand Slam men’s singles titles.

Down, two sets to none, in the Australian Open final, against the higher ranked and considerably younger Daniil Medvedev, Rafael Nadal did not simply count himself fortunate to have made it so far in a tournament he once considered himself unlikely to play.

Instead, he did what he has done since he burst onto the tennis scene nearly 20 years ago as a longhaired teenager in pirate pants.

It was a match awash in long rallies, momentum shifts, dazzling winners on the run and break points saved and converted. It started on Sunday evening in Melbourne and ended after 1 in the morning on Monday. It was 5 hours 24 minutes of true grit, and it broke Nadal’s tie with his greatest rivals, Roger Federer and Novak Djokovic, who are now tied for second on the men’s career list with 20 Grand Slam singles titles each.

“For me, it’s just amazing,” Nadal said. “Being honest, one month and a half ago, I did not know if I will be able to be back on the tour playing tennis again, and today I am here in front of all of you having this trophy with me. You really don’t know how much I fought to be here.”

Nadal, a Spaniard seeded sixth here, has proved many times that he does not beat himself. He just won’t. You need to pry a match and trophy from his hands, point by point, game by game, set by set. The second-seeded Medvedev, despite all his power and skills, could not manage it, losing his way midway through the third set and never quite figuring out how to correct course.

Nadal gave him openings, no doubt, failing to serve out the championship at 5-4 in the fifth set with the crowd behind him as it was throughout this marathon of a match. But at 5-all, Medvedev could not capitalize. Nadal broke him right back and then served for the title again.

This time, he did not blink. Let the record note that he clinched No. 21 by holding at love, winning a baseline rally, hitting a service winner, and then an ace and then a backhand volley winner into an open court that was an apt final touch to one of his masterpieces.

It was not his cleanest or prettiest work of performance art. He had to draw outside the lines and erase some of his game plan to find a way to the finish, but this was definitive, vintage Nadal in that he managed to continue competing in the moment no matter how rocky the previous moment might have been.

He is 35 and did not win a Grand Slam tournament in 2021 — losing to Djokovic in the semifinals of the French Open, the tournament where Nadal has reigned supreme, then playing only one more tournament the rest of the season because of a chronic foot problem.

There were discussions with his family, friends and support team about retirement. But Nadal remains passionate about the game, and after recovering from the coronavirus in late December, he flew to Australia to try again.

Nearly one month later, he has yet to lose a match in Melbourne, winning a warm-up tournament at Rod Laver Arena, then winning the main event by working his way through seven rounds in all sorts of ways and weather.

He suffered in the heat against Denis Shapovalov in the quarterfinals, losing a two-set lead and seeking medical treatment off court before winning in five sets. But Sunday’s final was played under the lights in the evening.

Medvedev, beaten by Djokovic in straight sets in last year’s Australian Open final, was the dominant player at the start this time.

The second set quickly became more complicated — and spectacular — as they attacked, stretched and defended brilliantly. Nadal won a 40-shot rally, the longest of the match, finishing it with a crisply sliced backhand winner that landed on the sideline and earned a standing ovation and then his first break of serve.

But his early lead proved unsustainable as Medvedev reeled him in, showing more consistency in the extended rallies and winning many more quick points with his bigger first serve.

A Russian, Medvedev was prevailing in the duel between Nadal’s best shot (his bolo whip of a forehand) and his own best shot (a slap of a two-handed backhand). Medvedev finally broke back as Nadal served for the set in a marathon game and failed to convert a set point.

Medvedev then rallied from 3-5 in the tiebreaker by winning the final four points to take what looked like a commanding two-set lead.

Nadal has now won all four of the major tournaments at least twice. He won his first Australian Open title in 2009, defeating Federer in five sets and then consoling him as he broke down at the awards ceremony. But Nadal has often been the one in need of comforting in Melbourne since then.

He lost four straight finals in radically different ways. In 2012, Djokovic beat him in a nearly six-hour test of skill and will that left both men struggling to stand as they awaited their trophies. In 2017, Federer, playing freely as he returned from injury, snuffed out Nadal’s own comeback story by rallying from 1-3 deficit in the fifth set.

Then, in 2019, Djokovic dealt Nadal the most lopsided defeat of his career in a major final, dominating him, 6-3, 6-2, 6-3. Watching that rout and knowing Nadal’s history in Melbourne, it seemed difficult to imagine him winning another Australian Open.

But Nadal surprised the field this year, and also surprised himself.