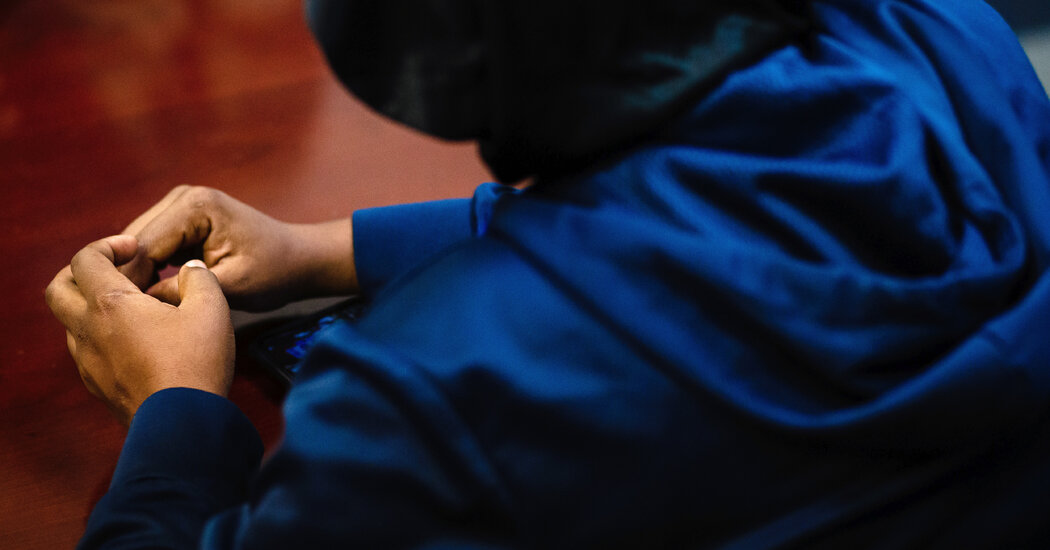 WASHINGTON — A Haitian couple and their young son were among thousands of undocumented immigrants whom U.S. officials decided to allow entry through the southwest border last summer — part of a record-setting surge in unauthorized crossings over the past year.

Beginning last spring, immigration officials were so overwhelmed that they admitted tens of thousands of migrants while issuing them a new document that did not include the typical hearing dates or identification numbers recognized in the immigration court system. The change sped up the process of releasing them into the country, but also made it much harder for the new arrivals to start applying for asylum — and for the government to track them.

Months later, the government has not been able to complete the processing started at the border, showing how ill prepared the system was for the surge and creating a practical and political quagmire for the Biden administration.

President Biden pledged as a candidate to fix the country’s broken immigration system, a campaign mantra that resonated with many voters after the harsh policies of President Donald J. Trump. But over Mr. Biden’s first year in office, his administration’s response to the surge in migration has consisted largely of crisis-driven reactions — including the faster entry process.

Migrants were caught crossing the southwest border illegally more than two million times between December 2020 and December 2021, the largest number since at least 1960. They came not just from Central America and the Caribbean but from around the world, many fleeing persecution and economic hardship with the expectation that Mr. Biden would be more welcoming than Mr. Trump.

Although migrants were expelled in a little more than half the cases, more than 400,000 of them were released into the country for a variety of reasons during Mr. Biden’s first year in office.

Of those, more than 94,000 were released through the sped-up process — a streamlined version of a longtime practice that critics call “catch and release,” in which those who are apprehended at the border are released from custody pending their immigration court proceedings.

These migrants were instructed to register with Immigrations and Customs Enforcement within 60 days to complete the process the border officials started. But in some parts of the country, local ICE offices were overwhelmed and unable to give them appointments. So the Haitian family and other new arrivals have spent months trying in vain to check in with ICE and initiate their court cases.

“It was a quick fix — ‘Deal with them later,’” said Evangeline Chan, an immigration lawyer in New York. “But they have not been able to.”

Human rights advocates say the change has made it harder for those seeking asylum to get by while they wait to be officially recognized in the immigration system. Republicans, in the meantime, have pounced on the Biden administration for releasing undocumented immigrants into the country with even less ability to keep track of them.

“Those who cross our border illegally should be detained and deported, not released into the interior of our country on an unenforceable promise to reappear,” 80 Republican House members wrote in a letter to Immigration and Customs Enforcement earlier this month. “It is nothing short of reckless.”

Mr. Trump’s policy was to restrict the flow of asylum seekers at the southwest border by making it harder to qualify and by making some people wait in Mexico before they could enter the country to apply. In some cases, applicants had to stay in Mexico until U.S. immigration judges ruled on their cases.

The most restrictive policy, however, came at the beginning of the pandemic when the federal government started using an obscure public health rule known as Title 42 to turn migrants away at the border, including those seeking asylum.

Even so, hundreds of thousands have been allowed into the country for a variety of reasons, including a lack of detention space because of pandemic precautions. The Biden administration has also made exceptions for humanitarian reasons, particularly for families and children.

Mr. Biden’s stated goal is to reverse Mr. Trump’s harshest immigration policies and be more welcoming to immigrants. But so far, immigration and human rights advocates say he has not come through, in large part because he has kept the public health order in place. Without it, Mr. Biden would have to make the tough choice of releasing even more undocumented immigrants into the country to await proceedings or detaining them.

As of the end of January, nearly 33,000 immigrants who were issued documents without court dates and the typical identification number had missed their deadline to check in and start their proceedings in immigration court, according to an ICE official speaking on condition of anonymity. It is impossible to know how many have tried to check in with ICE to get court cases started and how many have chosen not to.

Hopeful that immigration will prove a potent campaign issue, Republicans are blaming Mr. Biden for the sharp increase in migrants at the border because of his campaign promise that his administration would be more welcoming than the last. His response to the surge, they say, has only made things worse.

“D.H.S. was forced to deal with an unmitigated disaster, and notices to report was one of the desperate policies it implemented trying to cope,” Senator Ron Johnson, Republican of Wisconsin, said in a statement. The streamlined document, known as a notice to report, he added, “just exacerbated the problem.”

“This N.T.R. situation is a huge mess that everyone is trying to navigate right now,” Emily Haverkamp, an immigration lawyer and expert on asylum policies, said.

The potential for complications with the expedited processing was not lost on some members of the Biden administration, according to several current and former administration officials who spoke on condition of anonymity to discuss the internal debate. But some officials in the Department of Homeland Security argued that border officials could not have handled the surge of migrants without the expedited option to release them into the country.

After setting off last June on a treacherous journey from Chile — where they had relocated to years earlier — the Haitian family made it to Texas in August, where border officials released them without a court summons and told them to report to an immigration office once they reached Miami, their destination.

When they did so, the office was closed, operating on a reduced schedule because of the pandemic. When they tried to register online, they were told they would not get an appointment to finish their paperwork and receive official identification numbers, known as alien numbers, until 2032. When they wrote to an ICE email address, the automated response said the agency needed the family’s alien numbers.

“It’s a vicious cycle,” the husband said through a translator.

The delays have been felt most acutely in Miami, New York, Houston and Los Angeles, where many of the recent immigrants have settled. Miami appears to have the biggest backlog, and the Homeland Security Department said it is in the process of sending more staff to there to help address it.

Once people are officially entered into the immigration court system — now facing its greatest backlog in history — the average wait for an initial court appearance is nearly five years, according to data collected by the Transactional Records Access Clearinghouse (TRAC) at Syracuse University.

The Haitian couple, like most new immigrants, are not authorized to work, making it impossible to earn an honest living; they are residing with other Haitian immigrants in the Miami region. They tried for months to enroll their son in kindergarten, facing bureaucratic roadblocks at every turn. They cannot afford a lawyer to help them find a way to comply with the government.

“You’re more under the radar and you’re more in the shadows,” Ruby Powers, an immigration lawyer in Texas, said.

In the past, families willing to house new immigrants could count on them eventually getting permission to work, said Leonie Hermantin, the director of development, communications and strategic planning at the Sant La Haitian Community Center in North Miami.

“Now you have people who are stuck staying at people’s houses who are getting increasingly inhospitable,” she said, adding that some will soon face homelessness. “They are in this state of limbo. We at social service agencies — we just don’t know what to do.”