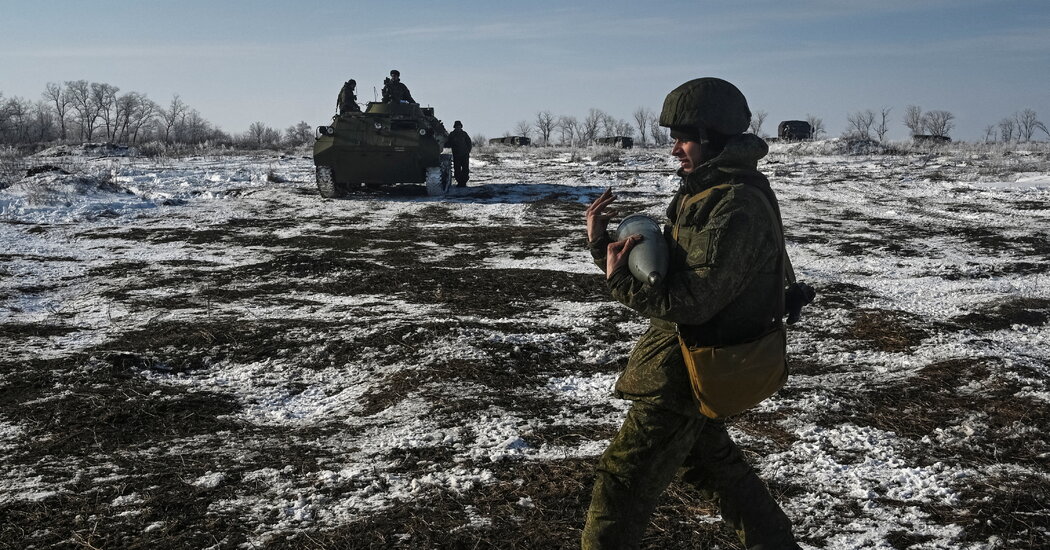 For much of his 22 years in high office, Vladimir V. Putin has worked to carefully balance Russia’s position in Europe. He ingratiated himself with some capitals as he bullied others, and sought economic integration as he lambasted European values.

Even after Russia’s annexation of Crimea in 2014 sent relations plunging, and Moscow harried some European countries with mass-scale disinformation and near-miss military fly-bys, it reached out to others — if not exactly winning them over, then at least keeping diplomacy open.

But, with this winter’s crisis over Ukraine, Mr. Putin is overtly embracing something he had long avoided: hostility with Europe as a whole.

The more that Europe meets Moscow’s threats with eastward military reinforcements and pledges of economic punishments, papering over its otherwise deep internal disagreements, the more that Mr. Putin escalates right back. And rather than emphasizing diplomacy across European capitals, he has largely gone over them to Washington.

The shift reflects Moscow’s perception of European governments as American puppets to be shunted aside, as well as its assertion of itself as a great power standing astride Europe rather than an unusually powerful neighbor. It also shows Russia’s ambition to no longer simply manage but outright remake the European security order.

But in seeking to domineer Europe, even if only over the question of relations to Ukraine, “There’s a risk of pushing Europe together, of amplifying more hawkish voices and capitals,” said Emma Ashford, who studies European security issues at The Atlantic Council research group.

“And there’s the risk of pulling America back in, even as it’s trying to push America out of Europe,” Ms. Ashford added of Moscow’s approach.

Mr. Putin has not given up on Europe completely. He did have a call with Emmanuel Macron, France’s president, on Friday. And he may still pull back from the crisis in time to recover European relations, or seek to do so once the dust settles.

But, if he persists, analysts warn that his approach could leave Europe more militarized and more divided, though with a Moscow-allied East far smaller and weaker than that in the Cold War.

The tension between the regions is growing and Russian President Vladimir Putin is increasingly willing to take geopolitical risks and assert his demands.

The Kremlin has repeatedly signaled that, while its concerns with Ukraine may have brought it to this point, it seeks something broader: a return to days when Europe’s security order was not negotiated across dozens of capitals but decided between two great powers.

“As in the late 1960s, direct interaction between Moscow and Washington could give a political framework to a future détente,” Vladimir Frolov, a Russian political analyst, wrote of Moscow’s ambitions.

This is not entirely a matter of hubris or great power ambition. It also reflects a growing belief in Moscow that this arrangement is, in effect, already so.

After Russia annexed Crimea and invaded eastern Ukraine in 2014, which Western governments punished with economic sanctions, the crisis was meant to be resolved with negotiations between Moscow and Kyiv, Paris and Berlin.

Though Washington applied pressure, it urged that the matter be settled among Europeans, hoping for a stable balance on the continent.

But while the letter of the so-called Minsk agreements nominally satisfied Russian demands, the Kremlin came away believing that Ukraine had reneged.

The conclusion in Moscow, by 2019 or so, Ms. Ashford said, was that “European states are either unwilling or unable, probably unable, to compel Kyiv to follow through.”

This also reinforced long-held views in Moscow that Germany’s economic might or France’s diplomatic capital were in a world shaped by hard military power.

“They’re insignificant, they’re irrelevant, so there’s this framing in Moscow that we have to talk to the U.S. because they’re the only ones that really matter,” Ms. Ashford added.

Military power among the member states of the European Union, which has tried to assert itself as Moscow’s interlocutor on Ukraine, has substantially declined relative to both the United States and Russia in recent years. This was exacerbated by the departure of Britain.

At the same time, sharp divisions within Europe over how to deal with Russia have left the continent struggling for a coherent approach. The departure of Angela Merkel, Germany’s longtime leader, and Mr. Macron’s failed bids at unofficial European leadership have left Europe often adrift between an American-led status quo.

“Outside of Paris and Brussels, everyone is pretty desperate for U.S. leadership on this crisis,” Jeremy Shapiro, the research director of the European Council on Foreign Relations, told a Brookings Institution conference this week.

“All of this means that Russia is somewhat verified in its view that Europe is a U.S. puppet and doesn’t really need to be engaged separately,” he added.

Though Mr. Putin’s exact plan for Ukraine remains, by seeming design, a mystery, he has emphasized that his agenda extends to Europe as a whole.

Ominous warnings. Russia called the strike a destabilizing act that violated the cease-fire agreement, raising fears of a new intervention in Ukraine that could draw the United States and Europe into a new phase of the conflict.

The Kremlin’s position. President Vladimir V. Putin of Russia, who has increasingly portrayed NATO’s eastward expansion as an existential threat to his country, said that Moscow’s military buildup was a response to Ukraine’s deepening partnership with the alliance.

In past crises over Ukraine, Russia’s aim has focused narrowly on that country, largely toward a goal of keeping it from aligning with the West. It sought to avoid triggering too much European opposition, and even tried to win European help in protecting its interests in Ukraine.

Now, perhaps as a result of its Ukraine-focused coercion having failed to achieve its objectives, Moscow is demanding an overhaul to the security architecture of Europe itself, by ending or even rolling back NATO’s eastward expansion.

Such a change, however it came about, would mean altering the rules that have governed the continent since the Cold War’s end. And it would mean formalizing a line between West and East, with Moscow granted dominance in the latter.

Rather than seeking to manage the post-Cold War order in Europe, in other words, Moscow wants to overturn it. And that has meant attempting to coerce not just Ukraine, but Europe as a whole, making a standoff with the continent not only tolerable but also a means to an end.

“The most militarily powerful state on the continent does not see itself as a stakeholder in Europe’s security architecture,” Michael Kofman, a Russia scholar at C.N.A., a research center, wrote in an essay this week for the site War on the Rocks.

Rather, as a result of Moscow rattling that infrastructure or even seeking to pull it down, Mr. Kofman added, “European security remains much more unsettled than it appears.”

Mr. Putin’s willingness to accept broad hostilities with Europe could strengthen his hand in Ukraine, by demonstrating that he is willing to risk even the continent’s collective wrath to pursue his interests there.

But regardless of what happens in Ukraine itself, entrenching a hostile relationship between Russia and Europe sets them down a path that carries uncertainty and risk for them both.

Cycles of “sanctions, diplomatic expulsions, and various forms of retaliation,” Mr. Kofman wrote, can easily take on a logic of their own, escalating in ways that hurt both sides. Both Russia and Europe are economically vulnerable to one another and already face unstable domestic politics.

Relations between Moscow and European capitals have rarely been warm. But they have, for the most part, plodded along, overseeing, among many other shared concerns, a Russia-to-Europe energy trade on which virtually the entire continent relies.

There is also a risk for the United States: being pulled deeper into a part of the world it had hoped to de-emphasize so it might focus instead on Asia.

Shorter-term, a divided Europe would seem to risk exactly what Moscow has long sought to avoid: more American power in Europe’s east, and greater European unity, however grudging, against Russia.

“The approach that the Kremlin is taking toward Europe right now, on the surface, to me at least, seems quite shortsighted,” Ms. Ashford said.

The most concerning possibility, some analysts say, is not that Mr. Putin is bluffing or that he does not see these downsides — though either could be true — but rather that this is a choice, of dividing Europe against him for the sake of his interests in Ukraine, that he is making willingly.