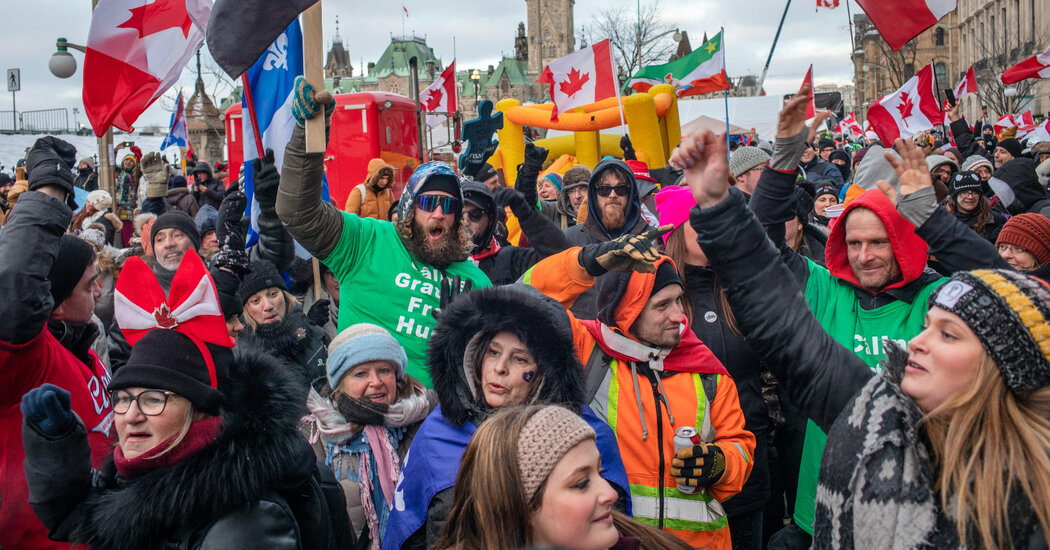 As protesters swarmed Canada’s capital, Ottawa, for the third weekend in a row to vent their anger about pandemic restrictions, the police in Windsor, Ontario, struggled to tame a blockade at the Ambassador Bridge, a crossing at the U.S. border that is vital to the supply chains of the global automotive industry.

By Saturday night, the bridge was still closed. The police had driven some protesters away in the morning, forming a line to push them back, but others stayed, and the crowd swelled as the day went on, despite frigid temperatures.

“We don’t have a time frame actually, that’s something that we’re not imposing,” Deputy Chief Jason Bellaire of the Windsor police said on Saturday afternoon. “They are professionals, they know what they’re doing, and they are pacing themselves.”

The unrest in Canada began in late January, when a loosely organized convoy of truck drivers and others descended on Ottawa to protest a Covid vaccine mandate for truck drivers crossing the U.S.-Canada border. Most Canadian truckers are vaccinated, and trucking organizations have spoken out against the protests.

But the demonstrations have transformed into a broader cry of frustration against Canada’s pandemic restrictions — which are among the most stringent in the developed world — and against the leadership of Prime Minister Justin Trudeau.

Over the past two weeks, protesters have blocked roads leading to the U.S. border at a number of points, including Windsor; Sarnia, Ontario; Emerson, Manitoba; and Coutts, Alberta. Automakers have been particularly affected by the blockade at the Ambassador Bridge, which normally carries $300 million worth of goods a day, about a third of which are related to the auto industry. Carmakers have been left short of crucial parts, forcing companies to shut down some plants from Ontario to Alabama on Friday.

In a meeting with senior officials on Saturday, Mr. Trudeau “stressed that border crossings cannot, and will not, remain closed, and that all options remain on the table,” according to a government statement.

On Saturday in Ottawa, steps from Canada’s Parliament buildings, the streets morphed into a huge festival even as temperatures plunged.

Thousands of people flooded downtown streets, sometimes making them difficult to navigate. Some draped themselves in Canadian flags; others blared pop music. Some were young. Others were in their 90s. They danced and chanted “freedom.” They railed against vaccine and mask mandates and Mr. Trudeau. Vendors made quick sales of small Canada flags and T-shirts that rudely told the prime minister where to go.

Though Ontario had declared a state of emergency the day before — and stiff penalties for protesters, including jail time — the few police visible in Ottawa were not seen handing out fines or enforcing the law. They were terribly outnumbered.

“They don’t have an easy job,” said Scott Spenser, 36, looking up from a drum concert on Sparks Street, as a phalanx of six officers marched by. “Hopefully this all ends peacefully and they lift the mandates and we all get back to living.”

The Ottawa police said more than 4,000 demonstrators had been in the city on Saturday. “Safety concerns — arising from aggressive, illegal behavior by many demonstrators — limited police enforcement capabilities,” they said in a statement.

They said they had set up an “integrated command center” that would “result in a significantly enhanced ability of our police service to respond to the current situation.”

Protests were also held in Montreal, Toronto and other cities, drawing crowds of varying size.

The Canadian demonstrations have attracted the attention of far-right and anti-vaccine groups globally, raising millions of dollars and inspiring copycat protests in France, New Zealand and Australia. Organizers of a U.S. convoy said a protest would be held in Washington, D.C., on March 5.

In Paris on Saturday, the police fired tear gas after dozens of cars emulating the Canadian protests evaded police checks. Thousands of cars, camper vans and trucks bearing protesters from around France made their way to Paris over the past few days to protest France’s vaccine pass and other government policies.

But Paris police deployed over 7,000 officers over the capital for the weekend to prevent any blockades, and many protesters’ vehicles were prevented from entering the city. At midday, police had handed out over 280 fines, the authorities said.

In Windsor, after the police drove many protesters away on Saturday, more arrived on foot to add to their numbers, honking and yelling in what resembled a party atmosphere.

Joanne Moody, a personal support worker from Chatham, Ontario, yelled at police officers as they formed a line to push the crowd down the street. She stayed into the afternoon, as the earlier tense mood grew festive, with people dancing and waving Canadian flags. Ms. Moody, who had spent the last two weeks at the movement’s original demonstration in Ottawa, said she wanted to see an end to mandated health restrictions.

Police have not moved the demonstration much further down road in the last two hours. Protesters marching between two blocked intersections, but intersection immediately before Ambassador Bridge is clear. pic.twitter.com/lxD7Cm7htX

An emergency towing truck and police armoured vehicles are nearing the intersection. Police are warning protesters to leave now or their vehicles will be towed. pic.twitter.com/QSpkbEo6IW