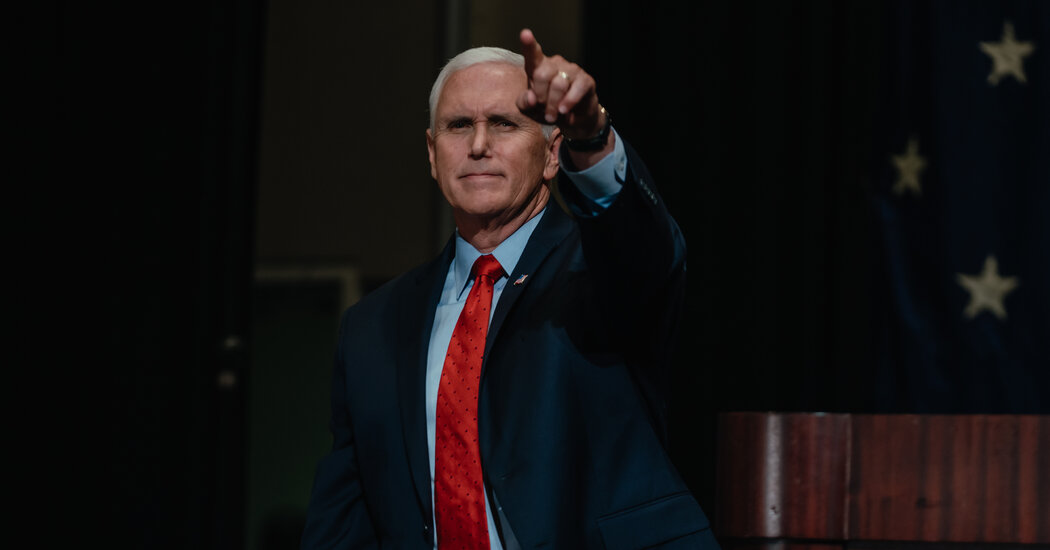 WASHINGTON — As Representative Darin LaHood, Republican of Illinois, prepared to campaign with Mike Pence, the former vice president, in his district last month, he braced for a backlash from his party’s right-wing base.

Just days before, the House committee investigating the Jan. 6, 2021, attack on the Capitol had re-created in chilling detail how Mr. Pence had resisted President Donald J. Trump’s orders to overturn his defeat in Congress — and how Mr. Trump’s demands had put the vice president’s life at risk.

Mr. LaHood’s fears of MAGA protesters and hostility to Mr. Pence never materialized; the former vice president received a warm welcome from the crowd at a Lincoln Day dinner in Peoria and at a closed-door fund-raising lunch with the congressman in Chicago, according to people who attended. But the concerns about how Mr. Pence would be received highlighted the awkward dynamic that has taken hold as the former vice president quietly campaigns for Republican members of Congress ahead of the midterm elections.

House Republicans helped Mr. Trump spread the election lies that brought Mr. Pence within 40 feet of a mob that stormed the Capitol clamoring for his execution, and the vast majority of them remain publicly loyal to Mr. Trump, still the biggest draw and the most coveted endorsement on the campaign trail.

But privately, many of them hope their party might soon return to some version of its pre-2016 identity — when Mr. Pence was regarded on the right as a symbol of conservative strength, not cowardice — and want to preserve a relationship with him in that case.

Mr. Pence, who served six terms as a congressman from Indiana, has been eager to campaign for congressional candidates, particularly in the Midwest. He is seeking to carve out a viable lane of his own for a potential presidential run in 2024, even if it means helping some lawmakers who continue to spout the election lies that imperiled him.

Over the past year, Mr. Pence has appeared at campaign events for more than a dozen members of Congress, happily attending steak fries, picnics and fund-raisers that have at times brought in half a million dollars apiece for candidates.

Overall, his aides said, he has helped to raise millions of dollars for House Republicans, many of whom still see him as a well-liked former colleague who often played the role of Trump administration emissary to Congress. On Wednesday, his alliance with congressional Republicans will be on display when he speaks on Capitol Hill as a guest of the Republican Study Committee, a conservative caucus.

That followed an appearance Tuesday night at a “Young Guns” fund-raising dinner hosted by Representative Kevin McCarthy, Republican of California and the minority leader, at Del Frisco’s Double Eagle Steakhouse in Washington. Mr. Pence’s appearance there was described by an attendee as akin to a homecoming for him. Mr. Trump was mentioned only in the context of discussing the “Trump-Pence accomplishments.”

Key Revelations From the Jan. 6 Hearings

“Most Republican officials will need people who like and support both men,” Whit Ayres, a Republican pollster, said of Mr. Pence and Mr. Trump. “I think that it would be difficult to win most elections with supporters of just one or the other.” He added, “We rise above our cognitive dissonance.”

Mr. LaHood, who has been endorsed by Mr. Trump, was one of more than 120 House Republicans who signed a lawsuit led by the attorney general of Texas that sought to have the Supreme Court essentially nullify the election results in major swing states. The congressman ultimately voted on Jan. 6 to affirm Joseph R. Biden Jr.’s victory.

But Representative Jim Banks, the Indiana Republican who invited Mr. Pence to appear this week, voted against certifying the election results, in line with the majority of G.O.P. members of the House. Still, in the weeks after the storming of the Capitol, Mr. Banks and a group of other conservative lawmakers who had supported Mr. Trump’s effort to invalidate his defeat in Congress, met with Mr. Pence. Mr. Banks thanked the vice president for the role he played that day certifying the election results, even as a mob of violent protesters threatened to hang him.

At the time, Mr. Banks said that Mr. Pence was uniquely positioned to unite Republicans after the violence and that the former vice president needed to become the party’s standard-bearer, according to people in the room who described the private session on the condition of anonymity.

But a few months later, Mr. Banks posted a picture from Mr. Trump’s Bedminster, N.J., golf club, in which he flashed a thumbs up alongside the former president.

“Make America Great Again,” he wrote as a caption.

A spokesman for Mr. Banks did not respond to emails or texts.

These days, Mr. Pence coordinates with Mr. McCarthy and the National Republican Campaign Committee, on which House races he wants to target. He has been most interested in campaigning in the Midwest, asking the committee for campaign contacts in the region of the country he used to represent.

Unlike Mr. Trump, who swoops in for mega-rallies and remains the biggest “get” for candidates, Mr. Pence’s campaign activities are often smaller and quieter, rarely drawing national media attention and sometimes taking place behind closed doors.

In February, Mr. Pence headlined a fund-raiser on Long Island for Representative Lee Zeldin, Republican of New York, who is running for governor, a close ally of Mr. Trump who voted against certifying the 2020 election results.

“It’s something that we will never for sure know the exact consequence of,” Mr. Zeldin said at a Republican primary debate, equivocating about the lie Mr. Trump has perpetuated that he was the winner of the 2020 election.

Representative Randy Feenstra, Republican of Iowa, who like the vast majority of other Republicans voted against creating an independent commission to investigate the Jan. 6 attack, hosted Mr. Pence as the headliner of an inaugural picnic hosted by his family in Iowa last summer.

Speaking to a crowd gathered around folding tables covered in red-and-white checkered cloths, Mr. Pence described serving alongside Mr. Trump as “the greatest honor of my life.”

“Under the leadership of President Donald Trump,” he told the crowd, Republicans proved “what you can accomplish if you stand firm and don’t back down from conservative principles.” The crowd applauded.

Representative Burgess Owens, Republican of Utah, has stated that “there’s no question in my mind that I think he won,” referring to Mr. Trump’s false claims on the 2020 election. Earlier this month, Mr. Pence headlined a fund-raiser for his re-election campaign in Park City.

Mr. Pence has also been willing to lend a hand to Republican candidates who have clashed with the former president, even when it puts him at odds with Mr. Trump.

On Wednesday, Mr. Pence endorsed Karrin Taylor Robson in the Arizona governor’s race, and plans to campaign for her this week. Mr. Trump has endorsed her rival, Kari Lake, a former local television anchor whose campaign is based on the former president’s election lie.

Mr. Pence has also campaigned for Representative Mariannette Miller-Meeks, Republican of Iowa, who backed the formation of a bipartisan commission to investigate the Jan. 6 attack and is the lone member of the state’s House delegation whom Mr. Trump has not endorsed.

“I voted for Trump both in 2016 and 2020, and I support his policies,” she said. “I don’t find myself in any adversarial relationship with the former president.”

Mr. Pence has been notably absent from the race involving the House Republican with whom Mr. Trump has the most adversarial relationship: Representative Liz Cheney, the vice chairwoman of the Jan. 6 committee, who is in an uphill battle for re-election in Wyoming. Ms. Cheney has called Mr. Pence a “hero” for standing up to Mr. Trump’s pressure campaign.

Mr. Trump has endorsed Ms. Cheney’s rival, Harriet Hageman, while Mr. Pence has stayed out of the contest.

Elsewhere, Mr. Pence has quietly boosted lawmakers who have been critical of Mr. Trump. Representative Don Bacon, Republican of Nebraska, drew the former president’s ire last year for condemning his conduct and supporting the bipartisan infrastructure bill, which prompted Mr. Trump to call for someone to challenge him.

“There were people in the crowd who were pretty hard-core Trump folks,” Mr. Bacon recalled. “I get some of them on social media who are critical of Pence, but I think he can still appeal to many. He’d be a great leader for the party.”

But many Republicans are keeping such sentiments to themselves, wary of angering Mr. Trump.

Representative Kat Cammack, Republican of Florida and a close ally of Mr. Banks, said there was no ambiguity where his loyalties lay.

“It’s pretty clear Banks has been aligned with President Trump since Day 1,” she said.