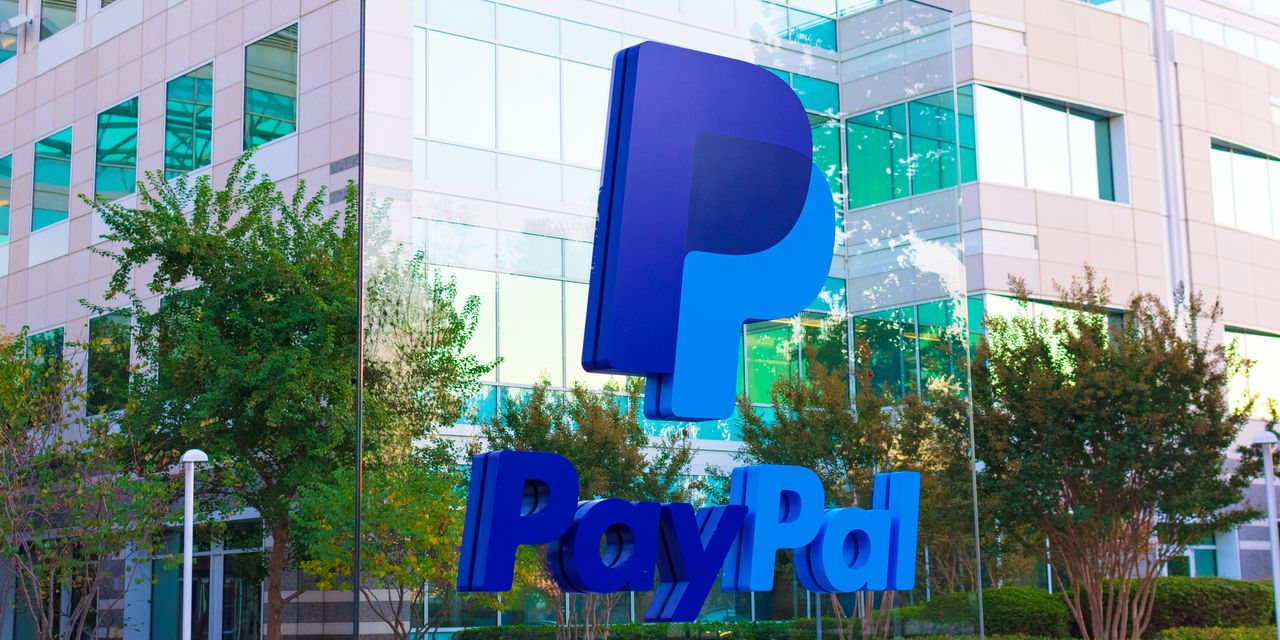 looks a lot cheaper after its historic wipeout. But the stock is dicier now, too. Buying the dip could lead to buyer’s remorse.

Shares of PayPal (ticker: PYPL) had their worst day since the company spun off from eBay in 2015, plunging nearly 25% to $132.30 Wednesday. The wipeout shaved $51 billion off PayPal’s market value, knocking it down to $207 billion. The decline pushed the stock’s price-to-earnings ratio down to 27.5, below its five-year average of 33 times forward estimates. The stock is now more than 55% below its 52-week high of $310.

The selloff seemed in the cards for some time. Tailwinds from a surge in e-commerce during the pandemic appeared to have been dissipating. PayPal’s management rattled confidence heading into the quarter when it cut its 2021 full-year outlook in November. Rumors of a mega-merger with

(PINS), which the company denied, didn’t instill confidence in the company hitting growth targets without help from acquisitions.

PayPal’s fourth-quarter earnings were its tipping point, eroding whatever credibility remained. PayPal scrapped its 2025 goal of reaching 750 million active users—a target it had backed three months earlier—and trimmed its 2022 revenue growth goal by two percentage points. It also said it would add 15 to 20 million new users this year, less than half the 48.9 million new accounts added in 2021.

PayPal said it should deliver at least 20% revenue growth in the fourth quarter of 2022 and exit the year in line or ahead of its medium-term target. But the company said 2022 is “off to a slower start than we previously anticipated and we are taking a more conservative stance on the year.” The company forecast first-quarter earnings of 87 cents a share, down nearly 30% from a year ago.

Moreover, CEO Dan Schulman said that PayPal would now likely revert to prepandemic user growth in the 30 to 40 million range per year.

“We have great confidence in the medium-term outlook and this shift is one that doesn’t mean that we won’t bring on tens of millions of [net new active users] every quarter,” Schulman said. “It just means that we’re not going to throw marketing dollars at low-value subscribers coming in.”

That might sound reasonable, but it isn’t the high-growth story PayPal was telling before–including forecasts for annualized revenue growth of at least 20% and EPS growth of 22% through 2025.

Wall Street analysts are now reassessing their models and cutting estimates. At least 27 analysts have cut their price targets since the earnings report, according to Bloomberg, taking the median target down to $202 from $276.

“There’s a mix of dynamics going on and it will take time to work through them,” said MoffettNathanson analyst Lisa Ellis in an interview with Barron’s. The stock now trades below a 50% premium to the market, she notes, an attractive entry point. But there’s also more uncertainty around whether the company will hit its growth targets, including first-quarter estimates, which she said had sharp headwinds.

and a little less

Pay,” she said. “I’m not opposed to that shift, but we’ll have to wait and see how it plays out.”

BTIG’s Mark Palmer downgraded the stock to Neutral from Buy. “We now view PYPL as a ‘show me’ story,” he wrote. The company would need to show it’s capable of sustaining revenue growth north of 20% “before we would be comfortable assigning it the kind of premium multiple that would indicate significant upside from current trading levels,” he said.

Nearly all of Wall Street was backing PayPal before this quarter’s earnings release, assigning the stock the equivalent of Hold or Buy ratings, according to FactSet.

The one analyst with a Sell on shares heading into the quarter was Andrew Bauch of SMBC Nikko Securities. Bauch initiated the stock last November with a Sell and $160 target, writing “Is this the new Big Blue?,” a reference to

(IBM), a once-leading tech company that saw its growth fizzle.

As Bauch saw it, PayPal wasn’t keeping up with overall growth in e-commerce, implying the company would have to gain market share in new areas like physical point-of-sales payments or turning its app into a mobile bank account. Some of that is happening now, but the proliferation of online checkout options ramped up competition, coinciding with tailwinds from the pandemic winding down.

“The space is getting increasingly crowded and PayPal will have a hard time to maintaining or growing its market share,” Bauch said in an interview with Barron’s on Wednesday. “Ultimately, I came to the conclusion that the guidance wasn’t realistic.”

Bauch cut his target on the stock from $160 to $125 after the latest earnings and maintained his Underperform rating.

“I don’t take pride in other people’s suffering,” he said, “but a lot of people are pretty upset and feel burned.”