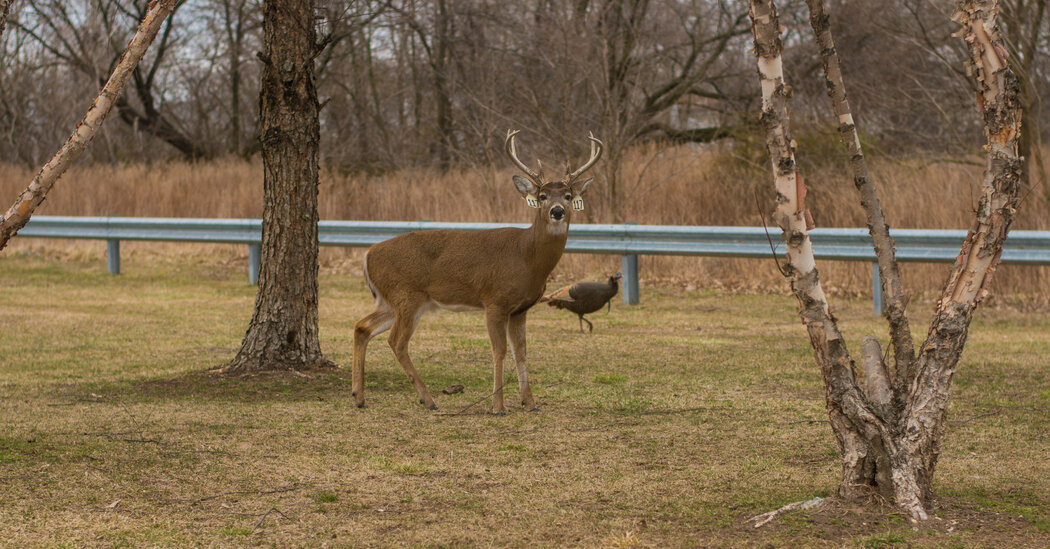 White-tailed deer on Staten Island have been found carrying the highly transmissible Omicron variant of the coronavirus, marking the first time the variant has been reported in wild animals.

The findings add to a growing body of evidence that white-tailed deer are easily infected by the virus. The results are likely to intensify concerns that deer, which are widely distributed across the United States and live near humans, could become a reservoir for the virus and a potential source of new variants.

Researchers have previously reported that the virus was widespread in deer in Iowa in late 2020 and parts of Ohio in early 2021.

Research suggests that deer are catching the virus from humans and then spreading it to other deer, and there is no evidence that the animals are transmitting it back to people. But longer-term, widespread circulation of the virus in deer would give the virus more opportunity to mutate, potentially giving rise to new variants that could spill over into people or other animal species.

“The circulation of the virus in deer provides opportunities for it to adapt and evolve,” said Vivek Kapur, a veterinary microbiologist at Penn State University, who is part of the Staten Island research team. “And it’s likely to come back and haunt us in the future.”

The researchers also found that one deer with Omicron already had a high level of antibodies to the virus, suggesting that it may have been previously infected. Omicron has proved able to evade some of the immune system’s defenses in humans. If it is similarly immune-evasive in deer, animals infected during earlier outbreaks may be vulnerable to reinfection.

The news that Omicron had breached white-tailed deer populations was not unexpected, experts said.

“It’s disappointing but it’s not surprising,” said Dr. Scott Weese, an infectious diseases veterinarian at the University of Guelph in Ontario.

“Omicron is quite ubiquitous,” said Dr. Samira Mubareka, a virologist at Sunnybrook Research Institute and the University of Toronto.

The new research, which has not yet been published in a scientific journal, is a partnership among the Penn State researchers, the conservation nonprofit White Buffalo, the New York City Department of Parks & Recreation and other institutions. As part of a deer population-control study, White Buffalo has been working with the city to capture local deer and sterilize some of the young males.

Between mid-December and the end of January, the field workers collected blood samples from 131 captured deer, as well as nasal and tonsillar swabs from a smaller subset of animals.

Nearly 15 percent of the deer had antibodies to the virus in their blood, the researchers found, suggesting that the animals had previously been infected with it.

P.C.R. testing of the swabs from 68 deer also revealed that seven of the animals were actively infected with the virus at the time of sampling. The P.C.R. tests also revealed that viral samples from all seven deer had a pattern of mutations that was suggestive of the Omicron variant.

The researchers have now sequenced four of those samples and confirmed that at least four deer were infected by Omicron, which spread rapidly through New York City’s human population in December.

“The recent wave is spilling over,” Dr. Kapur said.

The researchers cautioned that it was impossible to make sweeping conclusions based on the single deer that tested positive for the virus and also had high levels of antibodies in its blood. They could not rule out the possibility that the animal had developed those antibodies during the course of its current infection.

But if the findings hold up, and deer can be repeatedly reinfected by new variants, it raises the risk that the animals could become a reservoir for the virus, the scientists said.

“You can imagine this could be a never-ending, perpetual cycle of deer constantly circulating the virus among themselves and picking up the new variants,” said Suresh Kuchipudi, a veterinary microbiologist at Penn State who led the research team.

How humans are spreading the virus to deer remains unknown. People could spread the virus to the animals directly — perhaps by hand-feeding deer in parks or yards, the researchers noted — or indirectly, through wastewater or contaminated trash.

Dr. Mubareka emphasized the need for longitudinal surveillance of the Staten Island deer to determine how the variant evolves, whether it spills over into other wildlife, and what level of illness it causes. Deer have appeared asymptomatic when infected with earlier variants.

The researchers are hoping to conduct laboratory studies of the antibodies they detected in the Staten Island deer to try to determine which version of the virus each animal was infected by — and how much those antibodies might protect against other variants.

“These are all open questions,” said Kurt Vandegrift, a disease ecologist at Penn State and member of the research team. “We’re brand-new in finding these infections in the wild. And so that’s why we’re taking data, and that’s why we need to do more surveillance.”

In the meantime, the researchers said, New Yorkers should not fear their local deer, but keeping a safe distance away from wildlife is always a good practice.

Several states including New Jersey and Massachusetts have recommended additional measures for hunters butchering animals in the field, such as avoiding the head, lungs and digestive tract, in addition to general hygiene practices. “Get vaccinated, wear a mask, gloves, wash your hands, but assume that you could be exposed,” Dr. Mubareka said.

The best way to prevent deer from becoming a reservoir for the virus is to curb its spread in humans, the scientists emphasized. The discovery of Omicron in deer, Dr. Kuchipudi said, “is a reminder and probably call for action that the pandemic’s not over yet.”