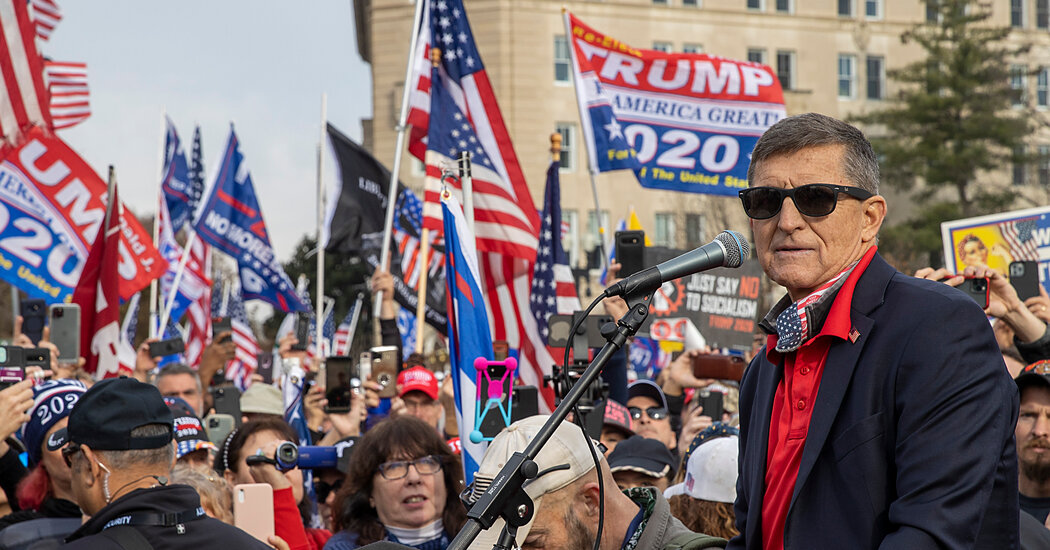 Michael T. Flynn, a former nationwide safety adviser, suggested that a army coup was wanted in the United States throughout a Memorial Day weekend convention organized by adherents of the QAnon conspiracy theory, drawing criticism from political scientists, veterans, Democrats and a handful of distinguished Republicans.

Appearing at the “For God & Country Patriot Roundup” convention in Dallas, Mr. Flynn listened to an viewers member ask, “I want to know why what happened in Myanmar can’t happen here” — referring to the Myanmar army’s overthrow of a quasi-democratic government and brutal crackdown on dissent, which some QAnon supporters have cited approvingly. Mr. Flynn replied: “No reason. I mean, it should happen here. No reason.”

Many criticized the remark, together with Representative Liz Cheney, a Republican who was kicked out of her House leadership position this month for criticizing former President Donald J. Trump and saying she would do all the things attainable to make sure he was not the Republican Party’s presidential nominee in 2024. On Twitter, Ms. Cheney mentioned, “No American should advocate or support the violent overthrow of the United States.”

Mr. Flynn — who suggested in December that Mr. Trump might invoke martial regulation to drive new elections in swing states — responded to backlash to his comment by arguing Monday in a post on Telegram, a messaging app, that he meant the reverse.

“I am no stranger to media manipulating my words, and therefore let me repeat my response to a question asked at the conference: There is no reason it (a coup) should happen here (in America),” he wrote.

Speaking at the identical convention over the weekend, Representative Louie Gohmert, Republican of Texas, mentioned that right-wing extremists weren’t solely accountable for the Capitol riot. The false concept that left-wing teams have been accountable is widespread amongst some conservatives.

A spokeswoman for Mr. Gohmert didn’t instantly reply to a request for touch upon Tuesday.

He and Mr. Flynn each spoke in entrance of a emblem that included the QAnon slogan “WWG1WGA,” brief for “Where We Go One, We Go All.”

A current ballot by the Public Religion Research Institute and the Interfaith Youth Core found that 14 percent of Americans, together with about one in 4 Republicans, believed in three central tenets of the QAnon conspiracy concept: that the United States is being run by a cabal of Satanist pedophiles, that “American patriots may have to resort to violence” to eliminate that cabal, and that a “storm” will quickly “restore the rightful leaders.”