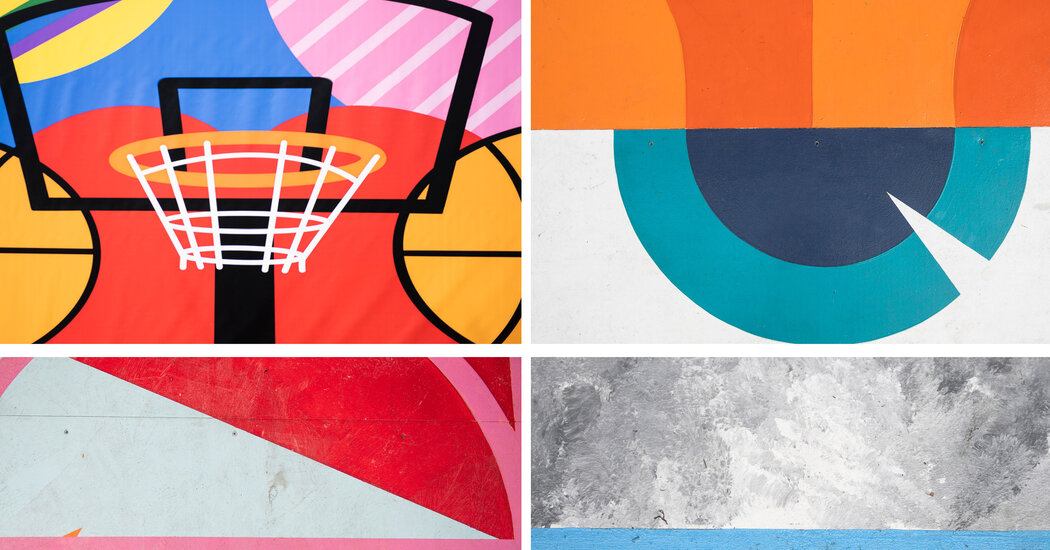 INDIANAPOLIS — It was a city full of color. Masked people in lightweight jackets strolled around Monument Circle here on Saturday, the light breeze tossing women’s ponytails. Strains of lilting flute music piped over the loudspeakers dueled with “Party in the U.S.A.” from the South Bend Chocolate Company’s storefront. Water from the Soldiers and Sailors Monument fountain rushed in the background.

And, around a city that a year ago saw empty streets and was very much shuttered, nearly 50 pieces of vibrant art and poetry installations filled formerly vacant windows and the Indianapolis International Airport.

The Arts Council of Indianapolis recruited nearly 600 Indiana-based artists and creative professionals to install outdoor art Downtown as part of a free three-week cultural festival, “Swish,” that is running in conjunction with the 2021 N.C.A.A. men’s basketball tournament, which starts Thursday. The organization partnered with the Indianapolis Cultural Trail and GANGGANG, a local arts incubator working to elevate artists of color, to present more than 250 pop-up music, dance and spoken word performances.

And even better news for the city’s creative class: Thanks to a nearly $1 million Lilly Endowment grant awarded to Indiana Sports Corp. to promote Downtown, all artists and performers would be paid.

“Indy was made for this moment,” Julie Goodman, the president and chief executive of the Arts Council of Indianapolis, said when the organization announced the project on March 8.

On Saturday, on Washington Street, the artist Meghan Curran’s 64 brightly colored basketballs were strung vertically in a window next to Rob Day’s “Mona With Cats,” a parody of Leonardo’s famous painting. Farther down the street, “MicroAffections,” a message woven onto a fence at the corner of Pennsylvania and Washington Streets, proclaimed, “I’m so happy to see you here.”

Also as part of “Swish,” four artists were paid $6,000 each to design 10-foot-tall basketball courts, with ramps along the sides so people can step onto the clear-coated, hand-painted surfaces to snap selfies (the back part is a printed vinyl banner). Each of the artists has faced struggles during the pandemic, but several saw some triumphs, like finally turning to art full time, even if by necessity, or experiencing increased creativity. Here are their stories.

‘For the Love of the Game: Live, Love, Ball!’
Shaunt’e Lewis

Shaunt’e Lewis’s favorite art is the kind that catches your eye from across the street. The 36-year-old artist’s vibrant court, “For the Love of the Game: Live, Love, Ball!” at Lugar Plaza was inspired, she says, by a Muslim woman from her hometown, Springfield, Mass. The woman, Bilqis Abdul-Qaadir, was a college player who dreamed of playing basketball overseas but would not be permitted to wear her hijab in Europe. She sacrificed her career to challenge the rule in court. “I want people to be inspired not just by the art, but by the story behind it,” Lewis said. “Especially girls who look like me. You don’t often see work by Black women on a grand scale.”

Lewis worked full time as a cosmetologist and salon owner before the pandemic, but after closing one of her two salons this year, she became a full-time artist. She’s excited to see Indy host the tournament. “I’m not too worried, with people getting vaccinated and the numbers going down,” she said. “I just hope everyone can come together and be cool about everything to make it a positive event and keep our city intact.”

Michael Martin, a.k.a. Kwazar, was trying to corral the swirl of ideas he had for “L-Levate,” his court on Monument Circle. Then the 39-year-old former tattoo artist had it: A dunk against a psychedelic city skyline. “I want you to know that Indy is where this is taking place,” he said.

For the last four years, Martin had worked as a forklift driver and assisted with event setup at Lucas Oil Stadium through a temp service. But now, he said, he has gotten enough work as an artist to go full time. “I feel like I have something to give,” he said. “Even if it means breaking even on money, in the end, I’d rather spend my days working on my craft.”

Before William Denton Ray, 46, was a digital artist and muralist, he was a skateboarder. His days strolling a Greenwood, Ind., skate shop, admiring the vibrant artwork on the boards, inspired “Court Vision,” the geometric orange, blue and purple design whose squares of half-lidded eyes follow fans down Pennsylvania Street. While the vinyl backdrop was digital, he said painting the court proved a challenge, “just trying not to step where I’d already painted.”

He also works as the in-house artist for Sun King Brewing, where he designs graffiti-inspired cans. His career was affected most, he said, when the pandemic halted First Fridays, the once-a-month Downtown Indy art showcase in which galleries threw open their doors. “I lost thousands of dollars over the last year,” he said.

‘Shoot for the Stars’
Joy Hernandez

If you’ve strolled Downtown in the last two years, you’ve likely had at least one Bean the Astronaut sighting. Now, the muralist Joy Hernandez’s character, named after Alan L. Bean, a painter who walked on the moon, is the highlight of her mural “Shoot for the Stars” off Georgia Street, across from Bankers Life Fieldhouse.

Like her happy-go-lucky Bean, Hernandez, 39, has tried to keep perspective on a year that initially sent her into an artistic funk. She had a full slate of projects lined up for 2020, including creating a banner for the Indianapolis 500 and a mural for the side of a Jiffy Lube. “That was going to be a $5,000 payday,” she said.

But she said she has been fortunate that her commissions have only been delayed. And she knew just what to do with the $6,000 check she got for completing this work: Pay off the remainder of her $77,000 in student loans, three years ahead of schedule. “I can get on with my life and not live paycheck to paycheck,” she said.