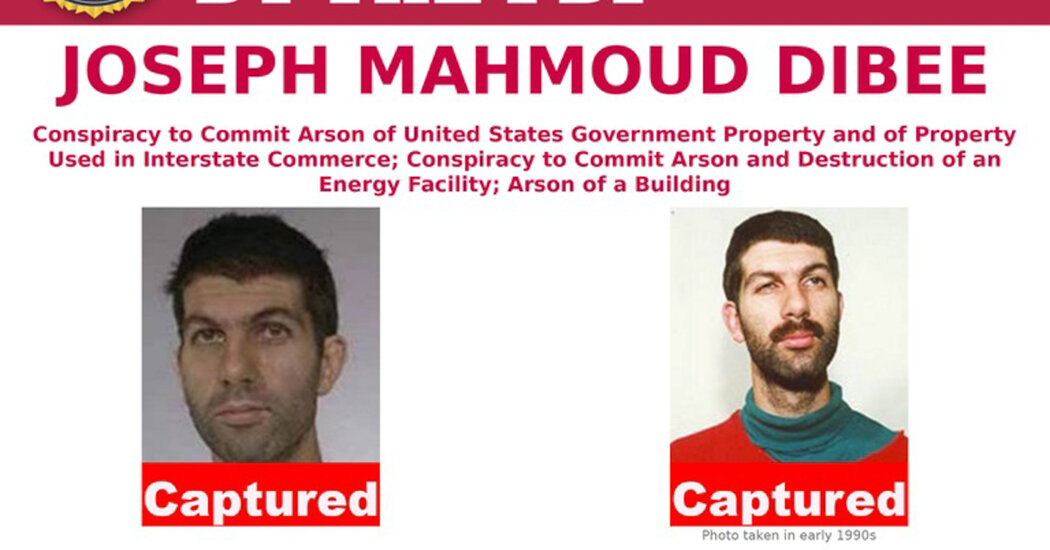 The man, Joseph Mahmoud Dibee, now 53, fled the country in 2005 and was first indicted in 2006 by a federal grand jury in Oregon. Prosecutors said Mr. Dibee’s pending criminal case in the Western District of Washington was resolved by his guilty plea on Thursday.

Mr. Dibee conspired with at least 15 other members of the Earth Liberation Front and Animal Liberation Front to damage commercial and government-owned animal-processing facilities with improvised explosives concocted with ingredients including fuel-filled milk jugs and model rocket igniters, according to court documents.

Members of the groups, referred to as the Family, vowed to keep their identities secret from law enforcement. They surveilled sites they were targeting and ignited time-delayed explosives to set off fires.

From 1995 to 2001, the Family was connected to more than 40 criminal acts amounting to more than $45 million in damages, prosecutors said. One of the members’ most significant arson attacks occurred in October 1998 at the Vail Ski Resort in Oregon, causing an estimated $26 million in damage, according to the F.B.I.

The Animal Liberation Front and the Earth Liberation Front were described in 2004 by John E. Lewis, then the deputy assistant director of the Federal Bureau of Investigation, as “the most active criminal extremist elements in the United States” and a “serious domestic terrorist threat.” Founded in Britain in the mid-1970s, the A.L.F. employed “violent tactics” and engaged in “direct action” against people or entities that the group believed to be abusing animals, Mr. Lewis said at the time in remarks to the Senate Judiciary Committee.

In court documents, Mr. Dibee is named as a participant in three attacks in three different states: the destruction of a meatpacking plant in Redmond, Ore., in 1997; a 1998 fire at a U.S. Department of Agriculture inspection facility in Olympia, Wash., that members said was part of “the great cleansing process” to stop “this war on wildlife and nature”; and a 2001 attempt to burn a government-owned facility that had been used to remove wild horses from public lands near Litchfield, Calif.

In December 2005, Mr. Dibee fled the United States to evade arrest ahead of federal indictments in Oregon, the Eastern District of California and the Western District of Washington that followed a domestic terrorism investigation led by the F.B.I., federal prosecutors said.

The F.B.I. previously suspected Mr. Dibee might have fled to Syria. Thirteen years later, in the summer of 2018, he was arrested by local authorities in Cuba before boarding a plane headed to Russia and was returned to the United States.

“From destroying evidence to fleeing the country, none of Mr. Dibee’s tactics stopped us from making sure he was held accountable for his malicious and destructive actions,” said Kieran L. Ramsey, special agent in charge of the F.B.I. in Oregon.

Mr. Dibee, through his lawyer Matthew Schindler, declined to comment.

In an interview last year with Oregon Public Broadcasting, Mr. Dibee challenged the government’s labeling of his criminal charges as domestic terrorism.

“In most cases where the government charges terrorism, it’s actually not,” Mr. Dibee said to Oregon Public Broadcasting, adding that he was more “susceptible” to that accusation as an Arab man living in America. In the interview, he also denied having been involved with any organized environmental groups.

“The reality is I’m an environmentalist, and somebody decided to say that I’m part of some organization that doesn’t exist,” he said.

Prosecutors said that Mr. Dibee would pay restitution to his victims — as determined by the government and ordered by the court — and that their recommended sentence was 87 months in federal prison. Mr. Dibee will be sentenced in July by Judge Ann Aiken of U.S. District Court in Oregon.

Josephine Sunshine Overaker, one of Mr. Dibee’s many co-conspirators, remains on the run, prosecutors said. Believed to have escaped to Europe in late 2001, she faces 19 felony charges in Oregon, Washington and Colorado.