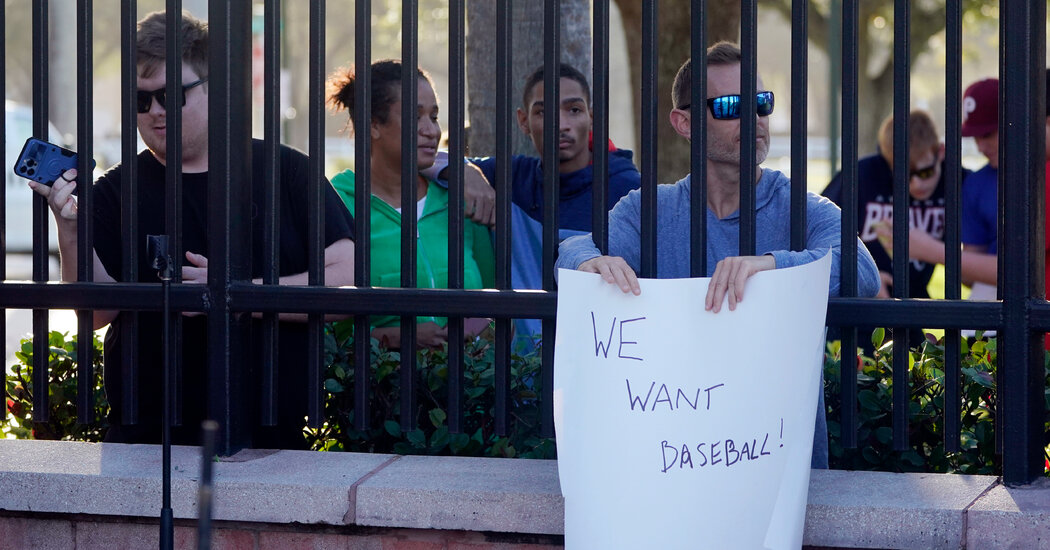 Despite a marathon negotiating session that dragged from Tuesday morning until Wednesday night — with only a brief respite for sleep — Major League Baseball and the players’ union could not resolve a roadblock and reach a new labor deal ahead of a 6 p.m. deadline set by the league.

As a result, M.L.B. Commissioner Rob Manfred announced on Wednesday night that another week of regular season games has been canceled. And the second-longest work stoppage in the sport’s history continued.

“Because of the logistical realities of the calendar, another two series are being removed from the schedule, meaning that Opening Day is postponed until April 14th,” Manfred said in a statement. “We worked hard to reach an agreement and offered a fair deal with significant improvements for the players and our fans. I am saddened by this situation’s continued impact on our game and all those who are a part of it, especially our loyal fans.”

Manfred notably did not use the word cancellation in his statement, but the wiggle room with which to fit a full 162-game regular season is narrowing.

Although M.L.B. had threatened last week not to reschedule canceled games — nor compensate players for them — the league offered players a chance this week to play a full season with rescheduled games, and thus full pay and service time. Rescheduling a week’s worth of games is obviously much easier than two, and the latter may be unlikely while keeping the same dates for the World Series in October.

“The owners’ decision to cancel additional games is completely unnecessary,” the union responded in a statement Wednesday. “After making a set of comprehensive proposals to the league earlier this afternoon, and being told substantive responses were forthcoming, players have yet to hear back.

“Players want to play, and we cannot wait to get back on the field for the best fans in the world. Our top priority remains the finalization of a fair contract for all players, and we will continue negotiations toward that end.”

Now, an already tense and complicated labor dispute could get even thornier over a significant issue: pay and service time for players tied to the missed games.

In M.L.B.’s eyes, lost games mean less revenue for its 30 clubs, and thus the league does not believe it should have to compensate players for those missed contests. The union’s position has been that the players will demand full pay and service time for games that M.L.B. unilaterally canceled, or they will attempt to have them rescheduled.

But a resolution to Wednesday’s major hurdle could be within reach. A league official, who spoke on the condition of anonymity given the sensitive nature of the negotiations, said that M.L.B. and the union were expected to continue discussing late on Wednesday night a way to resolve a disagreement that presented an obstacle in the lead-up to the deadline: The international draft and a form of draft-pick compensation.

M.L.B. gave two options on Wednesday morning to resolve the deadlock before it wanted the sides to get back to the other unresolved matters. The union rejected them.

In the afternoon, when the union claimed it was expecting a response from the league on its proposal, M.L.B. offered three more options, according to two league officials: The union could maintain the status quo on both matters, the union could accept the trade, or, in a more complicated alternative, the union could have the qualifying offer system eliminated on the condition that it would have until Nov. 15 to agree to an international draft that would start in 2024. If the union declined the draft then, M.L.B. would have the right to end the C.B.A. after the 2024 season.

The union rejected all three of those options and gave its alternative in which the qualifying offer was removed for the 2022 season and the sides would have until Nov. 15 to agree to the international draft. If that didn’t happen, the qualifying offer would return after the 2022-23 off-season and the existing international amateur signing system would remain in place.

But that offer from the union came after M.L.B.’s 6 p.m. deadline on Wednesday, so the league followed through on its threat, bringing the total of canceled games to roughly 180. Should the sides move past their dispute over the international draft and qualifying offers, they could return to the other matters that had seen progress this week.

“We have the utmost respect for our players and hope they will ultimately choose to accept the fair agreement they have been offered,” Manfred said.

The sides have been discussing a new collective bargaining agreement since last spring. When they couldn’t reach a new one before the previous one expired, Manfred locked out the players on Dec. 2, bringing the sport to a standstill because all transactions with players were frozen.

On March 1, when the sides failed to agree to a new pact ahead of the first self-imposed deadline from the league, Manfred canceled the first two series, through April 6, of the regular season, which had been scheduled to begin on March 31.

On Monday, M.L.B. tried again with a deadline, telling players that Tuesday was the day by which to strike a deal that would allow for all 162 games. The sides spent all day Tuesday negotiating, and the conversations carried over into the wee hours of Wednesday.

The proposals advanced significantly in recent days, with gaps narrowing on such sticking points as the minimum salaries and the thresholds in the luxury tax system. But by Wednesday, the biggest issues came into focus: the international draft and the qualifying-offer system.

Although it affects only a handful of players a year, the union doesn’t like any inhibitors on players’ free agency, thus it wanted to end the qualifying offer system. Teams, particularly those in smaller markets, like getting something in return for losing a top player to a rival.

Hoping to cut down on the unsavory practices of an international amateur free-agent market that the league oversees, M.L.B. has long wanted to implement an international draft. Players, though, have repeatedly rejected the idea, preferring the free market.

Currently, children outside the United States and Canada can sign with teams as young as 16. But they are often scouted and reach verbal agreements with teams at much younger ages, particularly in the baseball-mad Dominican Republic. M.L.B. is concerned about corruption in the system and worries that children are being given performance-enhancing drugs by their trainers.

With the latest developments, the sides face the possibility of the first games being missed because of a work stoppage since the 1994-95 players’ strike, which resulted in the cancellation of more than 900 games and the 1994 World Series. That remains the longest work stoppage in baseball history.