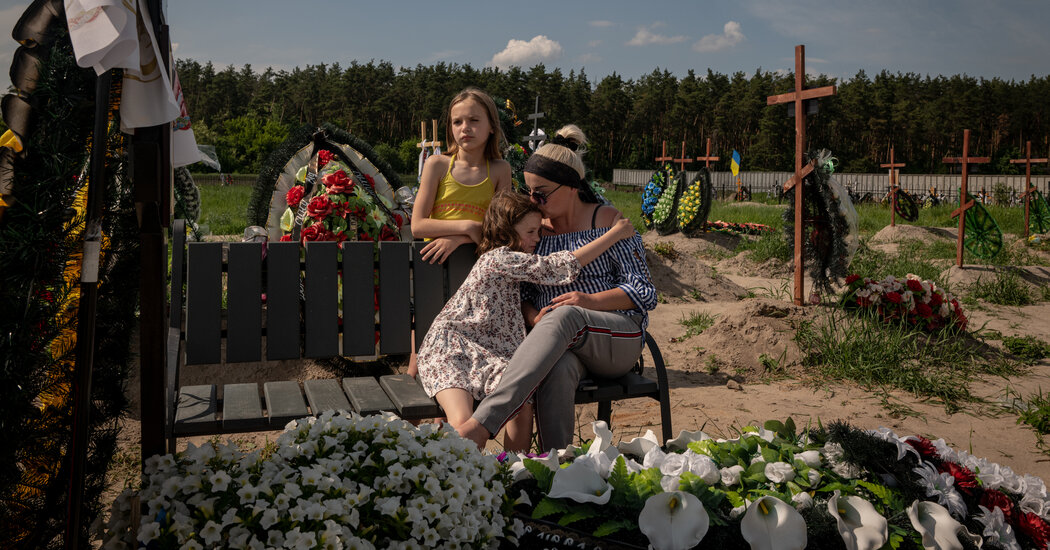 WASHINGTON — When the White House began negotiating with Ukraine to provide it for the first time with some of America’s most powerful, precision-guided weapons, President Biden insisted that President Volodymyr Zelensky agree to one major restriction: No firing into Russian territory, no matter how great the provocation.

“Ukrainians have given us assurance that they will not use these systems against targets on Russian territory,” Secretary of State Antony J. Blinken told reporters on Wednesday, with the secretary general of NATO standing alongside him. But he immediately added that Russia was the only one to blame for the introduction of a powerful new weapon to the battlefield. “The best way to avoid escalation is Russia to stop the aggression and the war that it started.”

There is no question that the decision to give Mr. Zelensky the weapons he has requested for weeks, intended to target Russian command posts and staging areas inside Ukraine, marked a major escalation in the kind of military aid that Washington is providing to help kill Russian forces.

But the restriction illustrated the balancing act that Mr. Biden is constantly facing as he decides how far he is willing to go to help Ukraine without escalating the conflict into what he has warned could result in World War III.

It will be weeks, or months, before anyone knows if Mr. Biden has gotten that balance right. Russia’s immediate response amounted to a muted condemnation. But if the weapons, called High Mobility Artillery Rocket Systems, prove effective at taking out more Russian generals sitting in their posts, or is viewed by Russia as a threat to territory it is clearly considering annexing as part of Russia itself, all that may change.

And the real test may come when Russia launches more missile attacks on Ukraine from Russian territory — and Mr. Zelensky will be bound, by his agreement with his chief arms supplier, to refrain from responding in kind.

Mr. Biden signaled his decision to send more powerful weapons in an opinion article published online in The New York Times on Tuesday evening. But even that article contained messages meant to keep President Vladimir V. Putin from overreacting.

Mr. Biden, who two months ago said “for God’s sake, this man cannot remain in power,” made it clear that if Mr. Putin is to be deposed, it will have to be by the Russian people. He wrote that “the United States will not try to bring about his ouster in Moscow.” And just weeks after his defense secretary said that the U.S. sought to weaken Russia so that it could never conduct an attack like this one again, Mr. Biden wrote that “we do not want to prolong the war just to inflict pain on Russia.”

But clearly the concept behind sending the HIMARS system, as the Pentagon calls it, is to inflict enough pain that the war in Donbas, and the surrounding areas in Ukraine’s east and south, is as costly for Russia as possible — in lives, in lost equipment, and in the reputational loss that Russia has suffered now that it is clear Mr. Putin’s vaunted military modernization was a lot less successful than first believed.

The decision itself was informed by intelligence assessments, according to American officials who were briefed on the process but asked that their names not be published in order to describe internal deliberations. Throughout the conflict, intelligence agencies have offered the White House analysis of how Mr. Putin was likely to react to arms transfers. And across the government, officials weighed the wisdom of sending Ukraine the U.S. military’s newest precision-guided rocket artillery weapons, which are capable of hitting targets more than 40 miles away. (Officials ruled out sending another weapon, the Army Tactical Missile System guided missile, that can fly almost 190 miles — for fear it could be used to strike targets deep inside Russia.)

American officials have said little about their internal debates over what to send, and what to withhold. But Avril D. Haines, the director of national intelligence, said last month, “We are in a position where we are supporting Ukraine but we also do not want to ultimately end up in World War III, and we do not want to have a situation in which actors are using nuclear weapons.”

Beginning even before the invasion, Ms. Haines, the nation’s most senior intelligence official, has presided over a process intended to figure out what the red lines are for Mr. Putin, or what could cause him to lash out overtly or covertly at the U.S. or its allies.

It was clear that any direct threat against Mr. Putin or his hold on power was the most critical red line — along with his fear that NATO would directly intervene in the conflict to attack Russian forces. And while turning to nuclear weapons would be the ultimate escalation, Ms. Haines noted in her testimony that there are many steps Mr. Putin could take first. Those could include, intelligence officials have said, various nuclear exercises to signal resolve or even covert or cyberoperations against NATO.

For Mr. Biden, avoiding a direct provocation of Mr. Putin has been a key priority from the start of the war. When the Polish government in March proposed sending MiG fighter jets to Ukraine, using the United States as an intermediary, John F. Kirby, then the Pentagon spokesman, said an intelligence assessment warned about the possible consequences.

“The intelligence community has assessed the transfer of MiG-29s to Ukraine may be mistaken as escalatory” if they came directly from NATO bases, said Mr. Kirby, who is moving in coming days from the Pentagon to the White House to sharpen the administration’s messaging about the war and other national security issues.

In the case of sending the rocket systems, “I think it was a good way to thread the needle,’’ Richard Haass, the president of the Council on Foreign Relations, said Wednesday on a Twitter Space run by The New York Times. And Dmitri Alperovitch, a founder of the Silverado Policy Accelerator, a think tank, said he believed the risk of Russia broadening the war was reduced because “the last thing Putin wants right now is escalation.”

At the Pentagon, senior officials cast the decision to send the advanced rocket system as the fastest, most effective way to make Russia pay a price for its continued military action.

“The core of the battle, right now, is on Ukrainian territory in the east,” Colin H. Kahl, the under secretary of defense for policy, told reporters. “The systems that we’re providing” would “allow Ukraine to arrange any target they need for that fight inside Ukrainian territory.”

Mr. Kahl made clear that any target now in Russian-held Ukrainian territory — even territory that Moscow seized in its first invasion in 2014 — is fair game.

Still, there are plenty of critics of Mr. Biden’s decision. “What it boils down to is we’re going to probably give Ukraine the most limited of the options as far as range,” Gen. Philip M. Breedlove, the retired supreme allied commander for Europe, said on Wednesday, referring to the rocket system. “That’s unfortunate.”

“‘But it is not OK for Ukraine to shoot back into Russia.’ ”

The fact of the matter is that Mr. Zelensky had little choice but to accept the restrictions that Mr. Biden has insisted upon. He needs the American weaponry — and similar equipment provided by the British — if he is to have any hope of repelling Russia, currently making small, daily progress in the Donbas.

Ukraine is “constantly reassessing what their requirements are, based on events on the ground, based on changes to the Russian approach,” Julianne Smith, the U.S. ambassador to NATO, told the Defense Writers Group on Wednesday.

But Ms. Smith said the U.S. and the alliance has been clear that NATO will not become a party to the conflict, the U.S. will not send forces to Ukraine and the administration will not support Ukraine with equipment to attack Russia.

“While the pieces of equipment have evolved and changed over the last couple of months, I think the parameters have remained relatively clear and I don’t expect those to change,” she said.

In anticipation of the decision that President Biden announced on Tuesday, the Defense Department moved the rocket systems it will provide to Ukraine from the United States to Europe. It will still take about three weeks for Ukrainian soldiers to learn how to operate and maintain the systems, a top Pentagon official said.

Mr. Kahl deflected questions of whether even the condensed training course at an undisclosed location in Europe would take too long for the rocket systems to play a meaningful role in the war.

“The Ukrainians have proven time and time again to be extraordinarily ingenious, and quick learners,” he said.

An earlier version of this article misspelled the surname of a founder of the Silverado Policy Accelerator. He is Dmitri Alperovitch, not Alperovich. The article also misstated the title of NATO’s leader. He is the secretary general, not the director general.