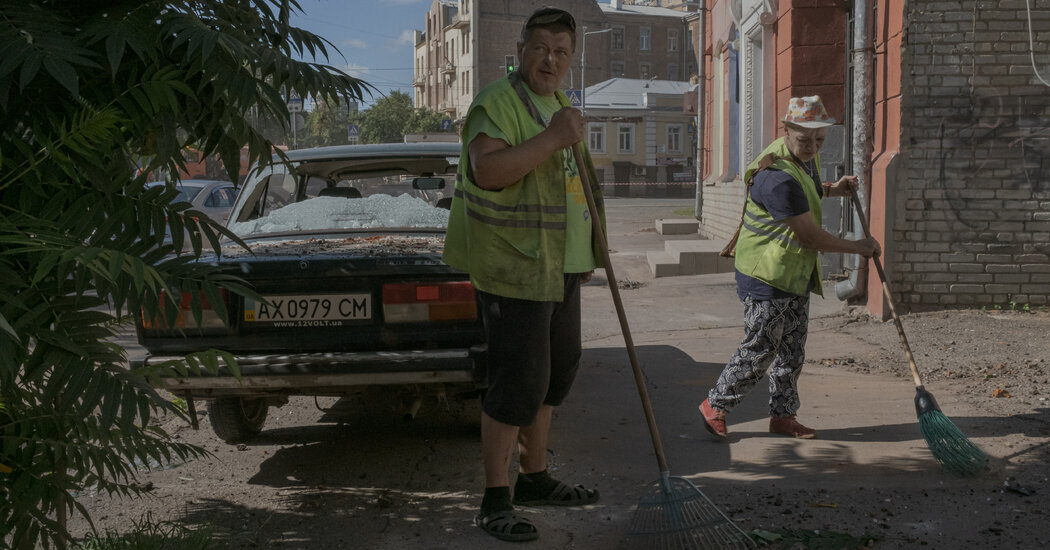 As it called for an international investigation into what it described as a “terrorist attack,” the Ukrainian government said on Saturday that it was compiling evidence to prove that Russia orchestrated an explosion at a Russian detention camp that killed dozens of Ukrainian prisoners.

Since the explosion late Thursday at the camp in Russian-controlled territory in eastern Ukraine, both sides have traded accusations over what was the source of the blast that killed at least 50 prisoners, many considered national heroes after being captured during a siege of a steelworks in the coastal city of Mariupol.

Russian officials claimed that Ukraine had attacked the prison themselves, to deter defectors, while the Ukrainians authorities rejected the narrative as absurd and said that the deaths were a premeditated atrocity committed by Russian forces from within the prison, where survivors have described deplorable conditions and ritual abuses.

Mykhailo Podoliak, an adviser to Ukraine’s president, told The New York Times that expert analysis of photos and videos released by Russia indicated that the center of the explosion was inside the building, with the building’s exterior practically undamaged.

“Any military expert will say the consequences of the explosion are not similar to a missile or artillery strike,” he said.

Russia’s defense ministry on Saturday maintained its claim that the Ukrainians had killed their own soldiers using precision-guided, American-made missiles, known as HIMARS, to strike the prison camp in Russian-controlled territory in eastern Ukraine.

The competing claims could not be immediately independently verified.

A senior U.S. military official, speaking about the Russian assertions of a HIMARS attack on the camp, said on Friday that Washington had seen no evidence to support those claims.

Mr. Podoliak said that Ukrainian prisoners had been moved to the barracks where the explosion occurred only days before the incident and said it was suspicious that no Russian soldiers or workers at the prison were injured.

He accused Russia of moving debris from other locations where the Ukrainians have hit targets using HIMARS to the prison camp before the explosion.

“This, as well as the speed and organization of Russian propaganda, indicates that the terrorist attack was planned,” he said. “The purpose of this despicable terrorist attack was to cover up the previously committed Russian war crimes against prisoners, discredit the armed forces of Ukraine, disrupt the supply of Western weapons and create tension in Ukrainian society.”

He also tied it to the international agreement to start shipping grain from Ukraine’s ports, saying that it sent a clear message that Russian assurances to allow cargo to move out safely could not be trusted.

Tetiana Kravchenko, a Ukrainian rights activist whose organization has been in contact with prisoners in the camp, said they could release only limited information about what they have learned to protect the safety of those being held there.

She said one Ukrainian prisoner had called his wife on Thursday night and reported hearing an explosion around 11 p.m.

“Not shelling, but just an explosion,” Ms. Kravchenko said, adding that she had a recording of the call. “He also said that two of his friends were taken out of the prison, where he is, earlier on the same day when the explosion happened.”

One of his friends was injured in the blast and another was killed, she said. Soldiers held in other parts of the camp have also relayed similar accounts of to their own family members, Ms.Kravchenko said.

She said witnesses from the camp did not recognize the barracks where the explosion took place, suggesting that it was in a part of the compound not used to house prisoners.

The prison camp, she said, is divided into two large squares, with a road cutting through the middle. On one side are a dining room, church, administrative building and barracks. On the other side is an industrial zone where prisoners do not visit.

Gen. Kyrylo Budanov, the commander of Ukraine’s military intelligence service, said on Friday that construction of the barracks in the industrial zone had been completed two days before and that prisoners had been moved there just before the explosion.