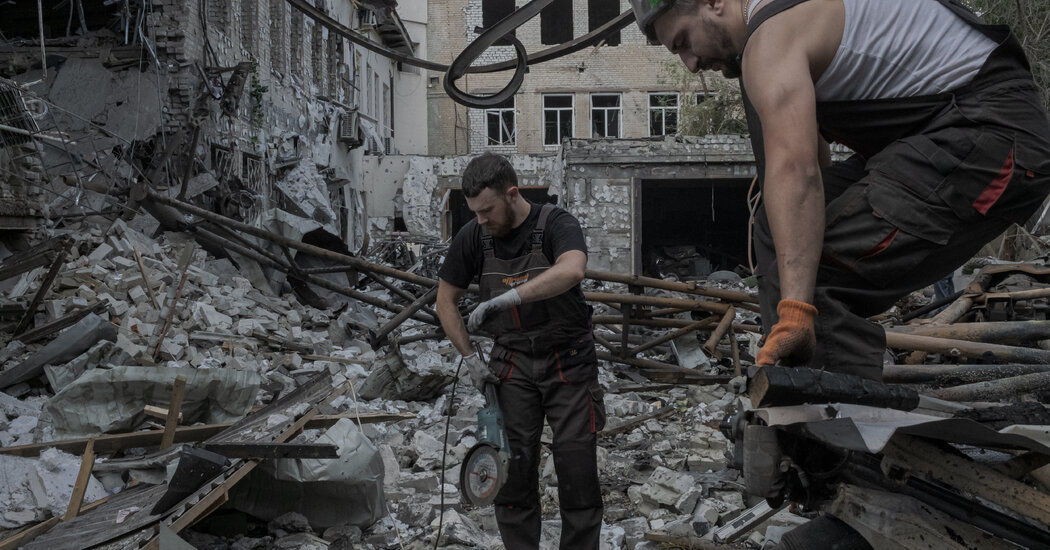 KYIV — With Russian forces in control of 20 percent of his nation’s territory, tens of thousands of his citizens killed and scores of cities and towns reduced to ashes, President Volodymyr Zelensky on Thursday asked Ukrainian citizens and the wider world to pause and remember why they fight.

“All stages of the history of Ukraine’s statehood, its defense and struggle for it can be described in one sentence: We existed, exist and will exist!”

It was a speech to mark the first celebration of a new national holiday, Day of Statehood, created last summer as the threat of war and a bellicose Russia loomed over the country.

The date was chosen by the Ukrainians to coincide with the day when Kyivan Rus, the first Slavic state, was baptized 1034 years ago by the Great Prince Volodymyr of Kyiv — a figure who is claimed by both Russia and Ukraine as central to their national identities.

Ukraine already celebrates Independence Day, on Aug. 24, to mark the country’s break from the Soviet Union in 1991. But officials have said the government felt the need to create the new holiday last summer after Russia illegally annexed Crimea, fomented rebellion in the east and threatened further aggression.

In contrast to Independence Day, Statehood Day is meant to address a more existential question by stretching back a millennium to demonstrate that Ukraine has its own history and culture independent of Russia.

Questions of history — and how to interpret that history — might have once been the subject of nuanced discussion in university lecture halls. But they were weaponized in the run-up to the war in Ukraine as President Vladimir V. Putin sought to justify his unprovoked invasion of a neighbor that shared deep cultural and historical ties.

Only three days before launching the first missiles at targets across Ukraine on Feb. 24, Mr. Putin declared Ukraine an invention of the Bolshevik revolutionary leader, Vladimir Lenin. He argued that the very idea of Ukrainian statehood was a fiction and that it had been a mistake to endow Ukraine with a sense of statehood by allowing it autonomy within the newly created Soviet state.

“Modern Ukraine was entirely and fully created by Russia, more specifically the Bolshevik, communist Russia,” Mr. Putin said. “This process began practically immediately after the 1917 revolution, and moreover Lenin and his associates did it in the sloppiest way in relation to Russia — by dividing, tearing from her pieces of her own historical territory.”

The creation of Ukraine’s Day of Statehood holiday was a response to Mr. Putin’s long-running historical revisionism, which has been rebuked by many historians as an extreme misreading of history.

On Thursday, Mr. Zelensky sought to emphasize the very thing Mr. Putin has attacked: Ukraine’s sovereignty and independence. “We will exist, because our state has incredible sons and daughters who have stood up for its defense,” he said.

“Every day we fight so that everyone on the planet finally understands: We are not a colony, not an enclave, not a protectorate,” Mr. Zelensky said. “Not a gubernia, an eyalet or a crown land, not a part of foreign empires, not a ‘part of the land,’ not a union republic. Not an autonomy, not a province, but a free, independent, sovereign, indivisible and independent state.”

When the new holiday was enshrined in law, the 28th of July was ordained a bank holiday. But Ukrainians will have to wait for peacetime to get a day off work. Under martial law, which was recently extended until Aug. 23, nearly all work is deemed essential.

Befitting a country at war, the holiday was marked with only modest celebrations, the laying of flowers on monuments, the raising of the Ukrainian flag, and exchanges of words of support and encouragement between friends and neighbors.

“We do not need fireworks and pomp to show the importance of our own statehood for the Ukrainian people,” Mr. Zelensky said. “Today we defend it with weapons in hands.”