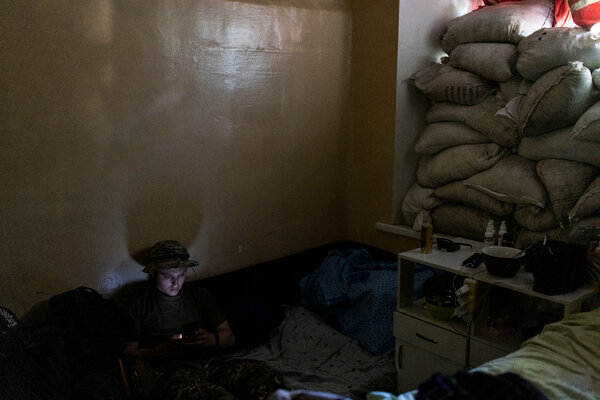 KRAMATORSK, Ukraine — Just to enter Sievierodonetsk, Ukrainian soldiers run a gantlet of Russian artillery shells zeroed in on the only access route: a bridge littered with the burned husks of cars and trucks that didn’t make it.

And once inside the city in eastern Ukraine, the focus of both armies for the past several weeks, Ukrainian soldiers battle Russians in back-and forth combat for control of deserted, destroyed neighborhoods.

Ukraine’s leaders now face a key strategic decision: whether to withdraw from the midsize city and take up more defensible positions, or to remain and risk being boxed in if the bridge is blown up. It reflects the choices the country has had to make since the Russian invasion began, between giving ground to avert death and destruction in the short term, and holding out against long odds in hopes it will later pay off.

In Sievierodonetsk, that calculation has taken on significance beyond the city’s limited military importance. In remarks to journalists on Monday, President Volodymyr Zelensky referred to Sievierodonetsk and its neighbor across the river, Lysychansk, as “dead cities” ravaged by Russian attacks and nearly empty of civilians.

And yet he insisted there was a compelling reason to stay and fight: Ukraine’s position throughout the war has been that it intends to hold onto its sovereign territory, and not yield it to Moscow.

Retreating now to better positions on higher ground across the Seversky Donets River, and then fighting to retake the city later, he said, would be harder and carry a higher price in bloodshed than holding on.

“Our heroes are not giving up positions in Sievierodonetsk,” he added. “Fierce urban combat continues in the city.”

It was a rare public rumination by Mr. Zelensky on strategic decision-making in the war, providing a window into the goals of his government and its military. Sievierodonetsk is the last major city in the breakaway region of Luhansk that the Russians have not taken; capturing it would give them near-total control of that enclave.

There are other factors as well. Falling back could be demoralizing to Ukraine’s forces. And some Ukrainian soldiers said it is worth drawing out the phase of urban combat to inflict more casualties on the already depleted Russian forces, and possibly damage their morale.

It was also possible Mr. Zelensky was aiding the military with misdirection by signaling one intention while quietly pursuing an opposite course of action.

The government has not said how many military casualties Ukraine has suffered overall since the Russian leader Vladimir V. Putin ordered the invasion in February. But Mr. Zelensky said last week that in the recent, intense fighting, each day his country was losing 60 to 100 soldiers killed and 500 wounded. Russia’s defense minister, Sergei Shoigu, said Tuesday that 6,489 Ukrainian service members had been captured.

Ukraine’s Interior Ministry this week estimated civilian casualties at 40,000 killed or wounded, though some government officials say the true figures are higher. Ukrainian officials said Tuesday that ruptured sewer and water pipes in the southern city of Mariupol, seized by Russia after a devastating siege, have created a risk of severe disease outbreaks that would raise the civilian toll.

The battle for Sievierodonetsk, part of Luhansk and the broader Donbas region in the east, has raged now for weeks, and some Ukrainian soldiers have questioned why the army has not ordered a tactical retreat.

“They are killing a lot of our guys,” said a soldier who asked to be identified only by his nickname, Kubik, interviewed last week while smoking beside a road in the town of Siversk, a staging area to the west of the fighting. He had recently rotated away from positions near Sievierodonetsk.

“Let them come forward a little bit, let them think they have captured the town, and then we will meet them beautifully” from the more advantageous position, he said.

The city lies on the mostly flat, eastern bank of the Seversky Donets. The western bank, in contrast, rises in a prominent hill that provides commanding views and firing positions.

Earlier in the war, Ukrainian soldiers were surrounded in Mariupol and fought for weeks, eventually retreating to hold just a tiny pocket of ground in a steel factory complex where they sheltered in bunkers, before Mr. Zelensky ordered the holdouts to surrender rather than be killed.

Ukrainian commanders decided to avert a smaller-scale version of that siege earlier this week in Sviatohirsk, a town lying on the low bank of the Seversky Donets.

Trying to trap Ukrainian troops in the town, Russian forces had been firing artillery at their only remaining route across the river, a bridge near an Orthodox monastery that was also frequently hit. On Monday, the Ukrainian army pulled back, blew up the bridge and took up positions on the river’s high bank, Ukrainian officials said.

Sievierodonetsk was once a sleepy, provincial backwater of about 100,000 residents, with streets lined with poplar trees and a skyline dominated by smokestacks of a fertilizer factory.

Now it is a largely abandoned ruin where battle lines sway often, with each side at times claiming to have expelled the other from part of the city. On Tuesday, Serhiy Haidai, the Ukrainian military governor of the Luhansk region, said Russian forces were again storming positions. “Combat continues,” he said.

Russian artillery fire into the potential fallback position on the high bank, where Lysychansk lies, has also been ferocious. Shelling hit a market, a mining academy and a school, Mr. Haidai said. The strike on the market touched off a fire that burned through the day Monday. Two civilians were wounded.

The Ukrainian government has been emphasizing the tenuousness of its positions in the battle for Donbas, the mining and farming region now mostly controlled by Russian forces.

The pivotal access bridge to Sievierodonetsk is a panorama of destruction, testifying to the difficulty and risk to Ukraine in holding even some portion of the city.

A video recorded by Radio Free Europe/Radio Liberty reporters who entered on a resupply run last week showed the mayhem on the span: crossing it meant weaving between the burned husks of cars and shell craters in the bridge deck.

The debris has piled up over the past two weeks. In an interview in late May, a soldier at a sandbagged checkpoint at the western edge of the bridge cautioned that Russian artillery spotters had the span — clear of debris at the time — under observation and opened fire whenever a car drove over. Two other bridges into the city were destroyed earlier in May.

Mr. Haidai has justified Ukraine’s efforts to hold Sievierodonetsk as partly a matter of symbolic resistance.

“Strategically, the city of Sievierodonetsk is not of great importance,” he said over the weekend. The high opposite riverbank is more significant militarily, he said. “But politically, Sievierodonetsk is a regional center. Its liberation will lift our morale substantially and demoralize the Russians.”

Still, Mr. Zelensky said he was open to reconsidering his decision based on developments. Either command — to hold ground or to retreat — had potential downsides, he said.